How local are the geodesics being length-minimizing?

My friends ask me such question (translation into the language of riemannian manifold). He saw the following conclusion in this note Page 188, in the proof of 4.4.6.

The note thinks it is trivial. As one can see, the $\subseteq$ part is trivial. But the problem arise in $\supseteq $ part. The $\exp$ is surjection to the right side implies any point with distance less than $r$ to $x$ is connected by a geodesic. It is generally a boundry problem in ODE. One knows that the geodesics are length-minimizing locally, and since $\textrm{d}\exp=\operatorname{id}$, geodesics connect each point locally, but it is often mysterious to talk about how much locally.

I think the claim is false. - I considered firstly the sphere with hole, then two point whose big circle joint the hole can not be joint by geodesics. But the problem is the $r$ defined above is exactly the distance between $p$ and the hole. So the example is not a counter-exmaple. 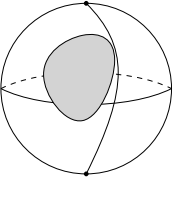 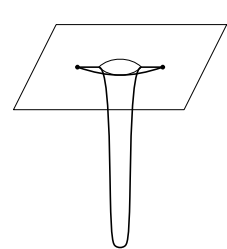 So the question is

Is the above statement right? And what can we say about the relation between the induced metric and the geodesics. Or more precisely, how local are the geodesics being length-minimizing?

The distance between $x$ and $p$ is defined by the smallest length among all piecewise smooth curves connecting $x$ and $p$: $$ d(x,p) = \inf \{ L(\gamma) \mid \gamma \text{ is a piecewise smooth curve connecting $x$ and $p$} \} $$ Now it can be shown that if $\gamma$ is such a curve that attains this minimal length, it is a geodesic(in the sense of satisfying the geodesic equation) up to a reparametrization. The proof goes along the lines of first establishing length minimizing curves minimizes some energy functional, then the geodesic equation pops up when you apply the methods of calculus of variations.

As noted in the comments, the cut locus is the concept you're looking for if you want geodesics being length minimizing. The injectivity radius at $p$ (which is the $r$ you defined here) is the minimal distance between $p$ and the cut locus at $p$. So in particular, within the injectivity radius, geodesics starting at $p$ are length minimizing. In your example, the direction vector at $0$ of the long curve you drew is not in the cut locus, but if you imagine rotating to the sides a bit, the resulting curve would probably not go all the way deep down the hole, but rather wrap around the hole a bit then come out and eventually come close to the second curve you drew.

Not the answer you're looking for? Browse other questions tagged differential-geometry riemannian-geometry smooth-manifolds or ask your own question.