Which shape does an elastic rod take as its ends are getting closer?

Not obviously false guesses (but of course strongly depending on the right definition of "curvature" resp."energy"):

Note that in the case of the circle arc you cannot bring $a$ to $0$ closer than $a = L/\pi$ without leaving the realm of functions $y=f(x)$ - for parabolas and sine functions you can.

Assuming that @Rahul's answer is correct and that - with the correct curvature and energy - the rod is shaped like a circle arc, this is what an oscillating rod would look like (roughly) after you release its ends (but constrain them to the horizontal line):

Note that this doesn't look at all like a sinoidal wave.

Note further that you cannot simply apply Fourier transformation to the semicircle because the endpoints are not fixed: 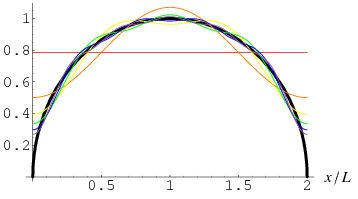 Since this is not anything close to what an elastic rod does, there must be some problem with the formulation. I advise reconsidering the choice of the energy function.

*I expect that for any curve with non-monotonic slope, one can find another curve of the same length but with lower energy, but I don't have a proof yet.

Not the answer you're looking for? Browse other questions tagged real-analysis optimization physics calculus-of-variations or ask your own question.

36
Can this ant find its way back to the nest?
1
relation between moment of inertia about center of mass and curvature energy for a smooth plane curve of finite fixed length.
6
Poincaré hyperbolic geodesics in half-plane and disc models including outer branch
0
Isoperimetric inequality via Lagrange multipliers in infinite dimensions. End of a proof.
0
Riemann integrable function which does not take its maximum on the interval
0
The first variation formula