Color an infinite equilateral grid with seven colors. Can it be possible to prove using Pigeonhole Principle that a monochromatic triangle exists?

I found a problem on Brilliant, and wonder if it has a Pigeonhole solution.

You have an infinite lattice of equilateral triangles and you would like to fill each node with one of seven colors.

Is there any way to do this so that no equilateral triangle of any size formed by the lattice lines has its three vertices sharing the same color?

I think that there can be a large region that can be proved to have an equilateral triangle.

Here's a problem that uses a rectangular grid and proves that a rectangle has to exist with all same vertices using three colors.

I can't create any proof on it, however. Can anyone show me if (or if not) the statement above can be proven and how it can / why it can't?

Note: a solution that someone contributed includes induction and Van der Waerden's theorem. Maybe that solution could be used to find the Pigeonhole approach? 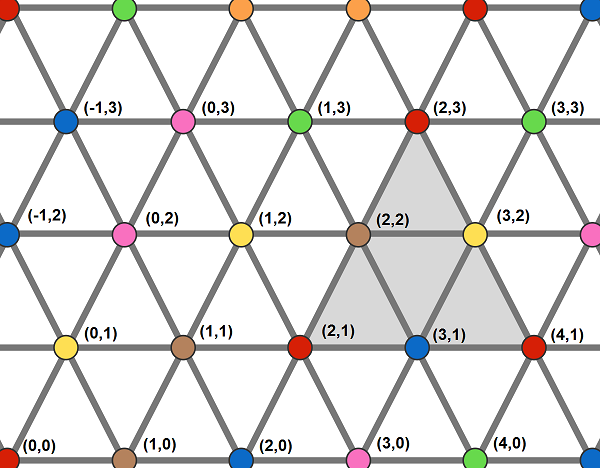 The corners theorem is also a density result rather than a coloring result: it says that for any $\epsilon>0$, if we pick $\epsilon N^2$ out of $N^2$ points in a $N\times N$ grid, then we can find the triangle among the points we picked, provided $N$ is sufficiently large. But this can be used to get a coloring result: just take $\epsilon = \frac17$, pick a sufficiently large finite subgrid of your infinite grid, and choose the most popular color used on points in that subgrid.

The corners theorem is a fairly high-powered result in Ramsey theory. But I claim that no simple result will do the trick, because the problem is at least as hard as finding monochromatic $3$-term arithmetic progressions, and you can see the arguments in the Wikipedia article on van der Waerden's theorem to see how tricky the proof for those is even for $2$ or $3$ colors.

2
Monochromatic Rectangle of a 2-Colored 8 by 8 Lattice Grid
2
Use of pigeonhole principle in ramsey-theorem about monochromatic triangles.
1
Matching numbers and colors
1
Three sides of a regular triangle is bicolored, are there three points with the same color forming a rectangular triangle?
5
Graph coloring when available colors are less than chromatic number
4
Pigeonhole principle: Coloring $11$ points of a $5\times 5$ square grid
2
n^2-Grid 3n-Coloring Game: Can we color a n-square grid with 3n colors s. t. we cannot choose n colors to obtain an histogram with $\Omega(n^2)$ area?
1
On the pigeonhole principle