Geometric proof of equivalence between two constructs of ellipse

Pretending that we don't know any analytic geometry and trigonometry.

Consider the following two constructs of an ellipse, where admittedly the second one is an ad-hoc construct for the ellipse parametrization that is more naturally done algebraically.

Is there a geometric proof that the above two constructs are equivalent (when the given foci and given concentric circles "match")?

Algebraically this is standard, however, I find it difficult to geometrically map the locus of constant-distance-to-two-foci to the locus from the concentric circles.

I don't mind if the mapping involves tools beyond compass and straightedge, as long as it's geometric in nature. Any pointer is appreciated.

Here is my answer using some ellipse geometric properties (location of foci and combined lengths of side elevations of constructing triangle for method $2$). 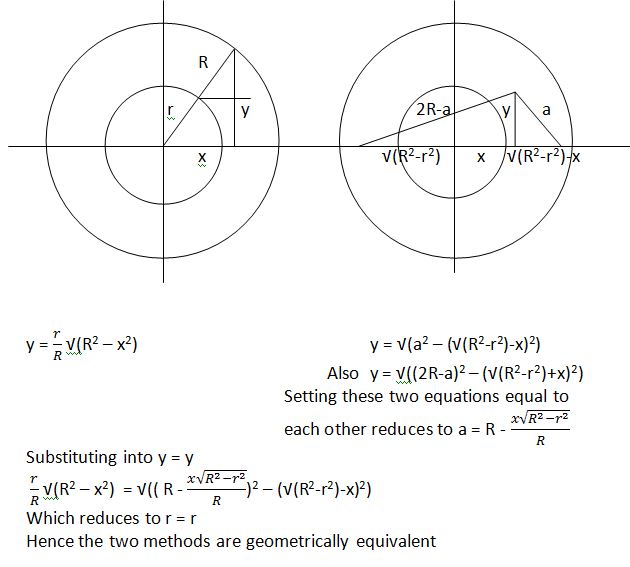 This answer is a little unsatisfying, as it amounts to: The two geometric constructions are equivalent, because the relations describing them are algebraically equivalent. I believe it's possible to remove some of the algebra, but I haven't found the cleanest way to do it ... yet!

We'll start with the two-circles construction: 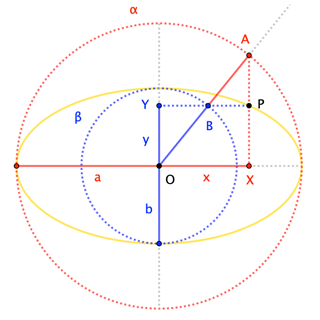 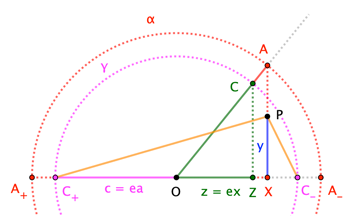 The reader may notice that @PhilH's expression for what he calls "$a$" amounts to the same observation. Even so, it's interesting (to me) to formulate things thusly:

Circle $\gamma$ meets the variable ray at a point whose projection onto the "horizontal" diameter of $\alpha$ divides that diameter into precisely the segments needed to join the foci to $P$.

I have no doubt that this interpretation exists in the literature; however, I only recently realized it, myself. Be that as it may ... We have recaptured the fact that the sum of the focus-to-$P$ distances is constant, namely the diameter of $\alpha$. $\square$

As I mentioned, I believe some of the algebra can be removed and replaced with more geometry. For instance, if we read equation $(5)$ as $$y^2 = \left(\;(a+z)+(c+x)\;\right)\cdot\left(\;(a+z)-(c+x)\;\right) \tag{5a}$$ then we see that $y$ is the geometric mean of lengths $a+z+c+x$ and $a+z-c-x$; moreover, the arithmetic mean (aka, the average) of those lengths is $a+z$. These values and relations are geometrically (ahem) mean-ingful. (The "geometric mean" link shows how they feature in a classic construction involving a right angle inscribed in a semi-circle.) I have a way to deduce the relations (mostly) geometrically from the two/three-circle construction, but it's currently a little messier than the already-messy algebraic route. If (when?) I find a tidier argument, I'll update this answer.

6
How do we deduce that an ellipse, when defined as a "stretched circle", has foci?

13
Passing an ellipse through 3 points (where 2 two points lie on the ellipse axes)? [Updated with alternative statement of problem and new picture]
7
To construct an ellipse, being a projection of a great circle, given two points on it
6
Equivalence of geometric and algebraic definitions of conic sections
5
Given a drawing of an ellipse is there any geometric construction we can do to find it's foci?
5
A circle has the same center as an ellipse and passes through the foci $F_1$ and $F_2$ of the ellipse, two curves intersect in $4$ points.
3
Locus of intersection of two perpendicular normals to an ellipse
0
Another six points lie on a circle
1
Geometric locus involving tangents of lines and circles that results in an ellipse.
1
How to construct the foci of an ellipse given both its axes' support lines and two points on the conic