This problem is a little difficult to formalize, so I will offer the following formalization. First, note that at the beginning of any round, we can normalize the game so that Bob needs exactly $1$ more point. We will define a strategy $s:\mathbb{R^+}\to\mathbb{R^+}$ as a function that takes as an input the number of points Alice needs, and outputs her choice $x$. Define $p_s(a)$ to be the probability that Alice wins the game needing $a$ points and playing strategy $s$. Let $S$ be the set of all strategies. Find $$p, p(a)=\sup_{s \in S}p_s(a).$$

Second, we note that $p(1)$ still equals $1$. Pick $\epsilon, 2\epsilon, 4\epsilon, 8\epsilon, \dots$ until she has won one of these. For sufficiently small $\epsilon$, this will always happen before she is defeated by Bob. At this point, she is ahead of Bob by $\epsilon$, and the argument for $a < 1$ applies. Again, I have included a formal proof below

These are the easy cases. Now intuition suggests that $\lim_{a \to \infty}p(a)=\frac 12$ (she is forced to choose $x=a$ when $a$ is sufficiently large). I have not tried to prove this, but it does not seem too difficult.

Question: Can this bound be improved, shown to be tight, or extended to all real numbers?

Proof for a < 1: Consider the game in which Bob needs $1$ point and Alice needs $1-\epsilon, \epsilon > 0$ points. We will show that for every $\delta > 0$, there exists a strategy that allows Alice to win with probability at least $1-\delta$.

Proof for a=1: We will describe a set of strategies that allow Alice to win the game in which both she and Bob need $1$ point with probability $\geq 1-\delta$ for any $\delta > 0$.

Let $\delta ' = \frac \delta 2$, and $r=\frac{\delta '}2$. Alice will begin by choosing $x=r, 2r, 4r, 8r, \dots$ until either Bob wins the game, or until Alice wins any of these coin flips. It is easy to verify algebraically that the probability that Bob wins in this stage is $\leq \delta '$. Once Alice wins any coin flip, she is ahead of Bob by exactly $r$ points. At this point, she can abandon her current betting scheme, normalize Bob's points and play a strategy for $a<1$ that gives her a win chance of $1-\delta '$. By union bound, the probability of Bob winning is then $\leq 2\delta ' = \delta$, as desired.

Credit for this proof goes to a friend.

Proof: Begin by making a few simplifying assumptions. First, assume that Alice never chooses an $x$ that would give her more than $a$ points if she won. This means that when the game ends, Bob always has less than $a+1$ points, as $x \leq a$. Similarly, Alice always has exactly $a$ points if she wins.

To prove the bound (1), we can start with the following statement. In fact both of the bounds given above can be proved using this, but I just look at (1).

We suppose that Alice always chooses $x_n\le a_n$ as a larger value of $x_n$ cannot further increase her chance of winning. Also, if $x_n\ge1$ then Alice may as well also make sure that $x_n\ge a_n$ as it will ensure that she wins the game if it comes up heads and does not affect the result in case of tails (i.e., Bob wins the game).

Now that we have established the upper bound (1), consider the following strategy, (for arbitrarily small $\epsilon$),

Finally, on the range $[1,2]$, I plotted the upper bound (2), the lower bound given by the probability of winning with the strategy above (denoted $p0(a)$), and numerically calculated $p(a)$ with an iterative optimisation. It can be seem that they coincide at the sequence of points $z_n$ but, elsewhere, the bound (2) does not look to be tight, and the strategy given above is suboptimal. 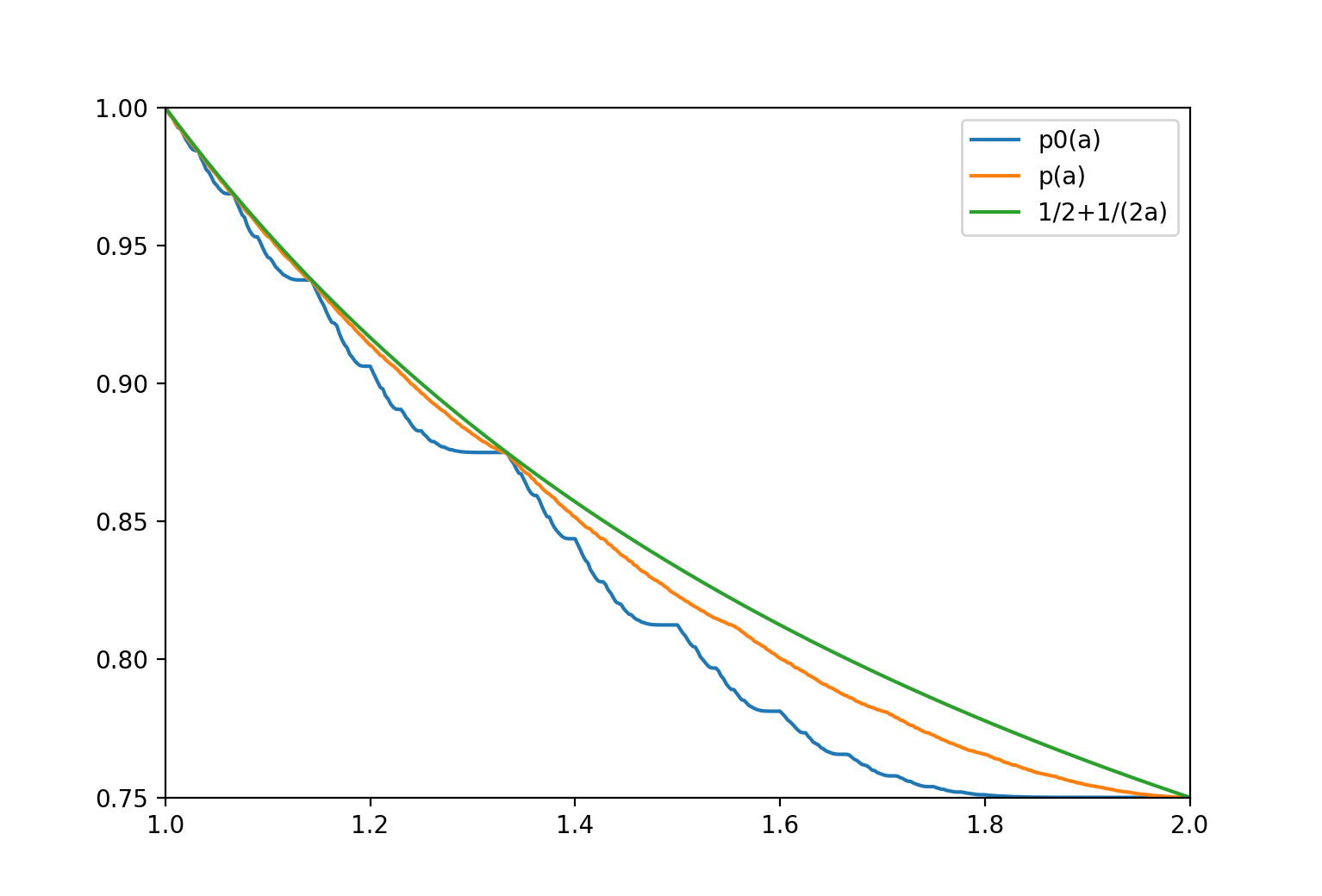 I am not convinced by your initial argument that for $a < 1$ Alice can get a probability of winning the match arbitrarily close to $1$ by using a constant small stake. My understanding of Gambler's Ruin is that the probability of winning overall with a fair coin will be $\frac{1}{a+1}$ (at least when the constant stake divides both $a$ and $1$, and close to this if the stake is relatively small but does not divide them)

My argument for the general case:

Let $W_A$ be the conditional expected amount that Alice gets, given that Alice wins the match. Clearly $W_A \ge a$

Let $W_B$ be the conditional expected amount that Bob gets, given that Bob wins the match. I would have thought $1 \le W_B \le a+2$, since the penultimate position cannot be more negative that $-1$ and so the final bet need never be bigger that $a+1$, which is enough to decide the match with a single bet from any position; if it were bigger then the same results could be obtained with a more complicated analysis of $W_A$ but that seems unnecessary

This is a bound rather than a strategy. Consider, as a strategy which gets arbitrarily close, choosing some small $\epsilon$ and using equal stakes to bet until you reach $a+\delta_a$ or $-1+\delta_{-1}$, both of these integer multiples of $\epsilon$ with both $\delta$s positive but less than or equal to $\epsilon$:

Not the answer you're looking for? Browse other questions tagged probability statistics game-theory or ask your own question.

7
What is the most effective strategy to win at this game?
1
What strategy should Alice choose to win this game?
0
A game with n piles of marbles
2
Game of coins - find the winning strategy
0
Is my approach to the following question correct?
6
Strategy of a game
1
What is the probability of winning this game?
3
Best of N until you win: what are the odds?