Finding the Transform matrix from 4 projected points (with Javascript)

The final goal is to create a tool for artistic projects using projectors and animation - somewhat far away from using maths...

I'm using a projector to project several squares over several shapes - as seen in the picture.

What I would like to do is for the user to draw 4 points on the screen (2D x and y) and from there extract a matrix object that I could apply to a regular DIV element of a dimension of 100px by 100px.

By finding scaleX, scaleY, rotation, rotationX, rotationZ and probably some perspective that I could apply to the div to relatively match the surface.

I'm not really familiar with geometry beyond sin and cos, and 3D in general and don't even know if that is something doable. If anyone could help me get started or point me in the right direction, I would greatly appreciate.

Here is an animated gif (click to enlarge), hoping it makes it more clear to understand.

The colums form homogenous coordinates: one dimension more, created by adding a $1$ as the last entry. In subsequent steps, multiples of these vectors will be used to denote the same points. See the last step for an example of how to turn these back into two-dimensional coordinates.

Step 2: Scale the columns by the coefficients you just computed:

Step 3: Repeat steps 1 and 2 for the corresponding positions in the destination image, in order to obtain a second matrix called $B$.

This is a map from basis vectors to destination positions.

$A$ maps from basis vectors to the source positions, so the inverse matrix maps in the reverse direction.

Step 6: To map a location $(x,y)$ from the source image to its corresponding location in the destination image, compute the product

These are the homogenous coordinates of your transformed point.

Step 7: Compute the position in the destination image like this:

This is called dehomogenization of the coordinate vector.

How to use this projective transformation with CSS

I've written a proof-of-concept implementation. The user interface is pretty crude, but the math works well enough. The implementation there uses the adjugate matrix instead of the inverse, both in solving the linear equations in step 1 and for the reverse transform in step 4. The result differs only by a scalar factor, which is irrelevant for homogenous coordinates. The benefit is that this avoids computing a bunch of determinants and performing a bunch of divisions.

If you wanted to, you could play the same game for five points in 3D space, in order to compute the full spatial projective transformation matrix. But that only makes sense if you actually have depth, sice no four of the five points may be coplanar.

I am fairly certain there is no closed-form general solution for this problem, which leaves you with numerical approximations. One simplifying technique would be to eliminate perspective from your problem and imagine the four points your visitors draw to be the shadow cast by a light shining from infinity. You could then, basically, guess and check, using guesses of whatever sophistication you desire.

I've written a really rough demo of what I'm talking about containing some unsophisticated assumptions. Because it removes perspective, it doesn't precisely solve your question, but see if the results might be satisfactory.

The user enters four points onto an HTML canvas with his or her mouse. The script then tries to iteratively converge on a CSS transform of a square to match the shape.

I've linked to some sample output. On the left, the yellow quadrilateral is the original hand drawing, the greys are the successive approximations, and the red is the final estimate. On the right, you see a square div styled with the CSS transformation. 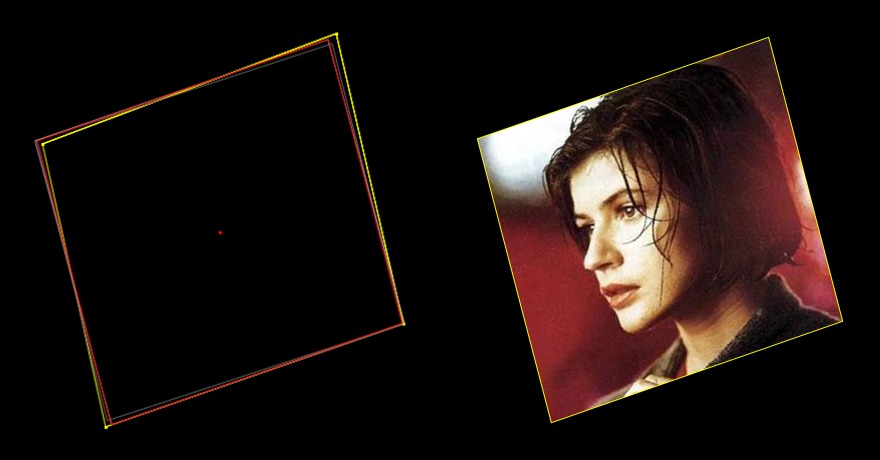 An obvious upgrade would be a better convergence function, perhaps using Newton's Method or something of its ilk, but I haven't taken the time to figure out the partial differential equations this would require.

(The code runs in-browser in synchronous Javascript, and locks the browser on my computer for between 5 and 20 seconds on average, so be careful.)

This isn't my solution, just a link to what, for me, was the perfect solution:

The way it's made, you can paste the JS into the page you're working on and line up the points exactly how you want, then copy the CSS from the inspector.

As far as I can tell (which is only superficially), this does the same thing as MvG's JS Fiddle, but it's packaged in a way that was more useful to me. HTH!

I could be wrong, but I believe the transform should be a projective transformation of the plane; i.e. a Möbius transform.

Any Möbius transform is completely determined by three points; the wikipedia link should give you enough information to obtain the transform.

Since you are asking the user to provide four points, it is possible that he could provide an impossible set of points. Ideally, the distortion is minor, and a reasonable strategy might be to compute all four possible transforms (there are four ways of selecting corners) and averaging them.

Another possibility is to try and correct the four endpoints, finding a small perturbation that has cross ratio 2, which (if I've calculated correctly) is the cross ratio of the default square with vertices 0, 1, 1+i, i. (All transformations of squares should have the same cross ratio!) Then use the transformation corresponding to the corrected endpoints.

Or you could only allow them to select 3 endpoints and fill in the fourth endpoint for them, and allow the user to adjust the corners until he's happy.

Not the answer you're looking for? Browse other questions tagged projective-geometry or ask your own question.

2
How to obtain an homography from a single soccer image?
-1
projective matrix
1
Linear Transformation of points
0
Mapping image's 4 corners to warped 4 corners...
1
Choice of correspondence points
0
3d rendering: transform to be applied to a screen Rect to match the perspective projection done by a arbitrary camera in an arbitrary 3d world.
0
Given a picture of a piece of paper, how can the picture be transformed to make the paper appear as if looking from above?
1
finding a projective transformation between points
17
Infinite Sequence of Inscribed Pentagrams - Where does it converge?
8
A formula for Perspective measurement
See more linked questions