Then, I wondered whether this necessarily happens in every metric space.

Is it possible to give an example of metric space where the diameter of a ball is strictly smaller than the radius?

I am not sure how to go about finding a set $X$ with a metric $d$ such that this condition holds. I guess I am stuck mainly because I am gathering all my intuition from the case of $\mathbb{R}^n$ with the standard metric, and admittedly haven't got a feel for how abstract metric spaces behave. Any help is appreciated.

Consider the discrete metric $d$ on a set $X$:

In fact, there does not exist any open ball in this metric space whose diameter is twice its radius!

Of course, all this theory would be pointless if it turned out that there is no metric satisfying $(*)$. Thankfully, there is indeed a bunch of metrics that satisfy $(*)$, and I will produce some of them below.

The $p$-adic metric is actually an important object in number theory, so $(\mathbb{Q},| \cdot |_p)$ is an example of a space which arises naturally and is a prototypical answer to your question.

Any ultrametric space would do, for example, the discrete metric on any set, or $\mathbb{Z}$ with the $p$-adic metric.

Consider a plane restricted to two rays from the origin, with a "ball" centered at the origin: 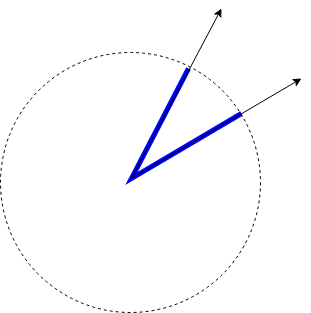 Nowhere in this ball can you find two points farther apart than the radius of the ball.

A bit (very) late answer but I was wondering why this simple example isn't mention here.

Choose $\mathbb{Z}$ with the metric induced by the absolute value $|\cdot |$.