Do we need 'such that' after qualifiers?

Alright this is driving me crazy. I'm trying to figure out when we actually need to use 'such that' in math/logical expressions. There seems to be quite a bit of inconsistency but I wanted to check to be sure.

I believe my math professor did what he did because it translated cleanly to English. Since you'd say "There exists an x such that x > 3" but you could also say "For all x, x=x". But I'm trying to figure out what the 'such that' symbol actually means in math, because I don't think the way it works in English necessarily makes sense. Wolfram Alpha defines the 'such that' symbol as 'indicating a condition in the definition of a mathematical object', and this make sense but they introduce yet another convention of qualifiers after a such that since q∈Z ≡ ∀q∈Z. And of course this convention makes no sense when translated to English in the case when for example when we'd say "x > 3: ∃x ∈ N" which translates to "x is greater than three such that there exists an x in naturals".

So anyways my question is what are you actually supposed to do? It looks like there are multiple conventions so which is best and most commonly used?

The Root of the Problem:

When we do this the need for 'such that' disappears.

Some people even write things like $$\exists z \text{ s.t. } \forall y, y\notin z$$ Personally I think this is a horrible practice. One can think what one wants about how it wastes space, but more importantly it reinforces the dangerous misconception that logical symbols are just shorthand for words in English sentences. They are not; they make up a separate language with its own syntax and semantics, and the way we usually pronounce it with English words can misrepresent that semantics. (Consider for example how many beginning students, and sometimes textbook authors, who get themselves into contortions trying to understand the truth table of $\Rightarrow$ as if it ought to be forced by the English words "if" and "then").

So always put quantifiers before the formula they range over. And eschew punctuation that pretends symbolic logic is a way to write down English.

And in Enderton's Elements of Set Theory, he presents the axioms of ZFC in first-order logic as follows: 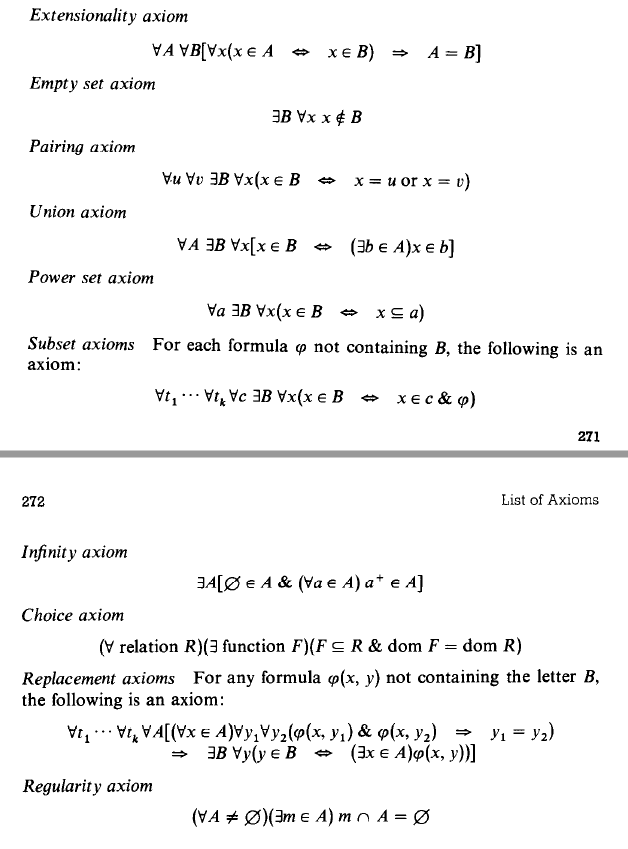 So I don't think there's a standard think or rule to follow about these kind of things when you're doing mathematics in general. See what others use in general, and use it similarly, in a way that would be clearly understood.

Edit: This kind of questions may be relevant when you're doing things related to mathematical logic or computer science.

There are no universally accepted standards in this case. You really must get used to slight variations in notation from one author to the next.

To add to the confusion, I often write $\forall x: [x \in N \implies P(x)]$ and $\exists x: [x \in N \land P(x)]$. It uses more symbols but it is often easier to work with than other notations. Tricky proofs in logic for the beginner, can often be made much simpler using this notation.

Warning: Avoid using $\exists x: [ x\in N \implies P(x)]$. Very weird things can happen. Using ordinary set theory here, this statement will be true for any set $N$ and for even the most nonsensical proposition $P(x).$

In my experience, mathematical logicians never use the form with ":", but split into two camps as regards the use of a ".": many people don't use a "." after quantifiers and take the quantifiers to have high precedence, so that $\forall x\forall y(x > y \implies x \ge y + 1)$ requires the brackets to make $x \ge y + 1$ fall in the scope of the universal quantifiers; others use a "." or a "$\bullet$" and take it as indicating that the quantifiers have low precedence, so they would write $\forall x.\forall y.x > y \implies x \ge y + 1$ (with the scope of the quantifiers extending as far to the right as possible). The former usage is fairly standard in the traditional logic literature, while the latter is perhaps more common among computer scientists and is often adopted in the syntax for proof assistants like HOL (and saves a lot of brackets in my experience of using such systems).

Not the answer you're looking for? Browse other questions tagged discrete-mathematics logic or ask your own question.

7
Why is this definition of convergence incorrect?
5
What does a period in between quantifiers mean?
3
Universal quantifier and "such that"
2
Does order of qualifiers matter in FOL formula?

10
What was the planned topic of Gödel's second paper on incompleteness?
1
quantifier restrictions in natural deduction
0
Argument is valid or not
1
Is this not a contradiction in propositional logic (when translated)?
0
Trouble interpreting implicit qualifiers in statement
1
Hidden Dependencies With Mixed Quantifiers
1
Quantificational formatting and going from using logic with words, to using it for math proofs
0
How to prove distributive property on Existentials?