I know that there are more similar questions and I used them in order to try to solve this question.

But I can't figure out how to continue please help me.

here is the question

Now I did the following using implicit differentiation :

As far as I understand any point that is on $y=-4x+1$ is a critical point, but how can I determine whether it is a local min, max or none?

Further more: By the implicit function theorem for each solution $(x_0, y_0)$ for the provided equation there is a single function $y(x)$ (assuming $F'y(x_0, y_0)\neq 0$ ) but in the question above I somehow supposed to find one function it doesn't make sense to me...

what am I doing wrong?

or solving for $x$

but tangency implies on 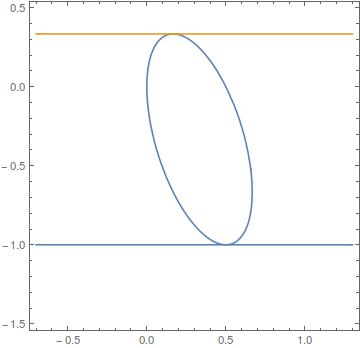 There might be zero or two real solutions to $x$. If there are two (including a single solution with multiplicity of $2$), those are the points on the curve.

These are the critical points defined by having an asymptote OR tangent line in some direction, including horizontal. (what you did was effectively letting $\frac{dy}{dx} = 0$ via setting $F_x = 0$)

If there is no real solution, see the next section after the dividor.

Next you should do the same by setting $F_y = 0$, which might give you another set of critical points defined by asymptote or tangent line (perhaps vertical).

It is a standard procedure and you should check both $F_x =0$ and $F_y = 0$. You can get some accurate information without making a precise plot.

When the points satisfy both $F_x = 0$ and $F_y = 0$, then $\frac{dy}{dx} = \frac00$ is undetermined (by that formula you use), which means the asymptote (or tangent line) defining the critical point is neither horizontal nor vertical.

The given equation is a quadratic curve (a.k.a. conic section) that is either an ellipse (including circle), a parabola, or a hyperbola (a pair of arcs).

There's a standard way to categorize a quadratic equation via its discriminant with precal methods. See wiki or Wolfram Mathworld.

Note that a general parabola has one tangent line with a single critical point which $x$ is a single root with multiplicity of $2$.

If it's an ellipse (which happens to be the case here), there are always 4 such critical points on the curve to let you "sort" as per the requirement.

A hyperbola always have $4$ such critical points "at the infinity" defined by the asymptotes. This is the case where there is no real solution when you plug $y = y(x)$ back.

Not the answer you're looking for? Browse other questions tagged multivariable-calculus implicit-differentiation implicit-function-theorem or ask your own question.