here is the problem:

The rules of this duel are rather peculiar: the duelists do not shoot simultaneously, but instead take turns. A fires at B, B fires at C, and C fires at A; the cycle repeats until there is a single survivor. If you hit your target, you will fire at the next person on your next turn.

For example, A might shoot and hit B. With B out of the game, it would be C's turn to shoot - suppose he misses. Now it's A's turn again, ad he fires at C; if he hits, the duel is over, with A the sole survivor. To bring in a little probability, suppose A and C each hit their targets with probability 0.5, but that B is a better shot, and hits with probability 0.75 - all shots are independent.

What is the probability that A wins the duel ?

So I have made a small tree (see below) and according to it the probability of A winning is $\frac{9}{16}$. Unfortenately this is not the correct answer. Any help ? 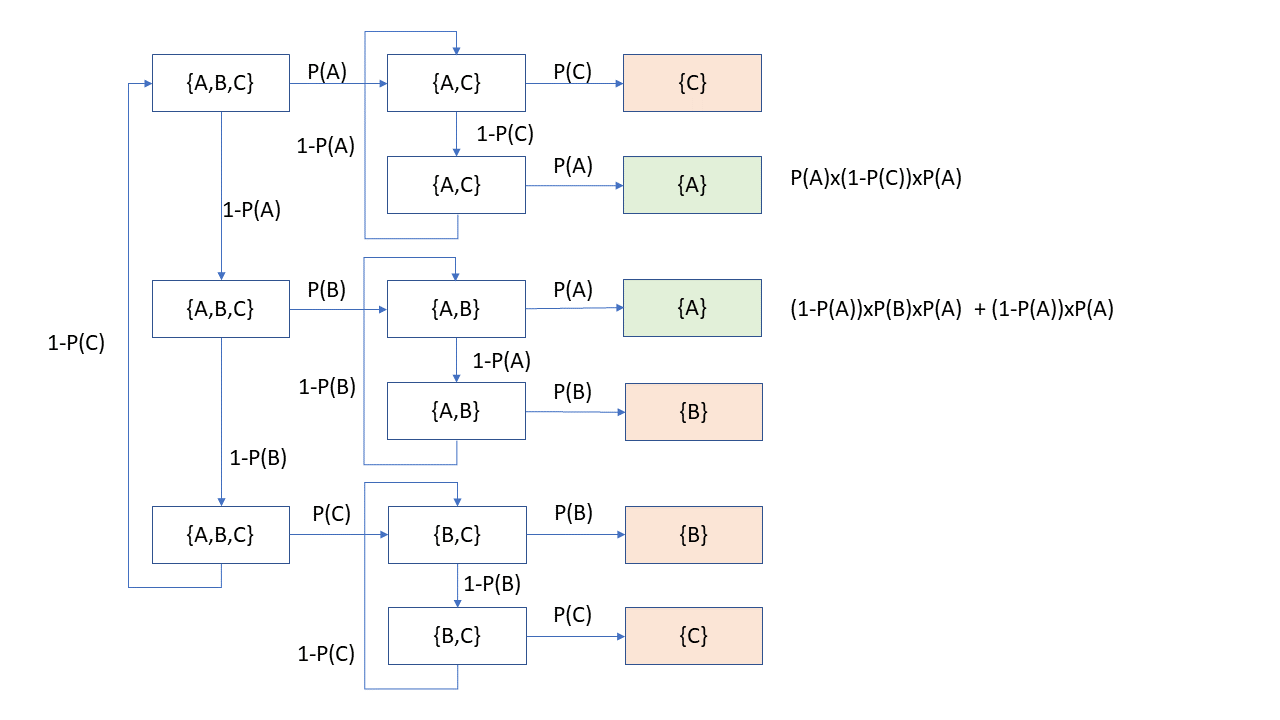 First, let's think about who dies first. In order for $A$ to win, either $C$ or $B$ has to die first. What is the probability of that?

We know that when all three players are alive, there are three possible states we can be in

So when a player dies, the states we can be in are

We clearly don't care about the $BC$ case since $A$ is dead, so let's consider what the probability of reaching either the first or third case is.

Now, let's take each of these two cases, and find the probability that $A$ survives in both.

Your flowchart isn't dealing with the extra probabilities coming from the loops, particularly the loop when all three people miss their first shot. These add extra possibilities that result in $A$ winning.

For a simpler example consider the situation with just two people, $A$ and $B$. We can calculate the probability $X$ that $A$ wins if they shoot first like follows:

Can you use this result and a similar method to work out the solution for 3 people?