How to form a mental image of $\mathbf {ijk}=-1$ in quaternions?

$\mathbf {ijk}=-1$ is part of the famously stone-carved formula by Sir William Rowan Hamilton, allowing the multiplication of triplets. There is already an intuition question on the topic of quaternions, and a beautifully illustrated post on 3D stereographic projections of quaternion rotations in 4D in the 3Blue1Brown youtube channel.

Attempt: $\mathbf i$, $\mathbf j$ and $\mathbf k$ act on the left of a quaternion as a pure rotation; hence,

and $\mathbf {i}$ acts on $\mathbf {j},$ rotating $\mathbf {j}$ into $\mathbf {k}$ in keeping with 3Brown1Blue's Grant Sanderson's "right-hand rule", illustrated with the 3D diagram below, corresponding to the stereographic projection of a 4D hypersphere of quaternions with norm $1$ and $0$ real component, where the $-\infty,$ $-\mathbf i,$ $1,$ $\mathbf i,$ $+\infty$ yellow line is the projection of a circle in 4D running through $-1,$ and centered at $0,$ passing through $-\mathbf i$ and $+\mathbf i;$ while the red-blue $\mathbf j,$ $\mathbf k,$ $-\mathbf j,$ $-\mathbf k$ circle corresponds to the 3D projection of a sphere in the 4D hypersphere passing through $-1,$ and centered at $0,$ and reaching both $\pm \mathbf k$ and $\pm \mathbf j.$ Rotating in the direction of $\mathbf i$ (i.e. multiplying on the left by $\mathbf i$) would amount to sliding the yellow line in the direction of the thumb, while rotating the red-blue circle following the clenching of the rest of the fingers: 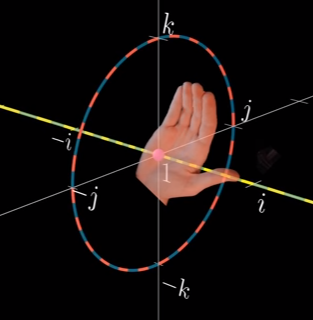 You are right this can be viewed as a composition of (4D) rotations and, in fact, this particular example provides an example of a very interesting phenomenon in 4D Euclidean geometry. Namely, if we start with an arbitrary point $q$ in $\mathbb{H}$,

(the scalars commute so this is okay) which becomes through the usual formulas,

which is easily seen to be orthogonal, i.e. $\mathbf{K}^T \mathbf{K} = \mathbf{I}$. Moreover, the expansion by cofactors and minors (which is very easy) shows $\mathrm{det}(\mathbf{K}) = 1$, so it is indeed a proper rotation (i.e. is not a rotoreflection).

So which plane is it? We may be tempted to note that while this permutes all 4 coordinates, you might see that it fixes the plane where $a = -d$ and $b = -c$, i.e. the quaternions of the form

are unchanged under the transformation $\mathbf{K}$. Now you might think that a bit strange, given that is not a simple coordinate plane - and it is, indeed, an omen. In fact, if you see something like this happening in maths, chances are something very strange is going on - it's no guarantee, but your spidey sense should tingle at it and you should feel disturbed. In particular, we can decompose this a bit further. Taking another look we can see that it is actually the composition of two rotations: one of which does

which fixes the $ij$-plane, and is a 90-degree, followed by

which fixes the $1k$-plane. This is also a 90-degree rotation. These two planes are orthogonal, and when you have a rotation in 4D space that is formed by the composition of two rotations of the same angle through two orthogonal planes, you get what is called an isoclinic or Clifford rotation that in fact fixes infinitely many planes, one other of which we just found. This is a very strange phenomenon with no simple analogue in 3D: in 3D a rotation will fix only one line, its axis, unless it's a degenerate rotation by zero degrees.

Likewise, the rotations by action of $j$ and $i$ are similar Clifford rotations, and they all together act to bring $1$ to $-1$ via $-1 = i(j(k(1))) = ijk$. If you want, you can think of this approximately as being like a hyperdimensional version of a Rubik's cube where you twist the sides through several different positions to move one colored patch from one side to another (not exactly, though, since here the whole "cube" is rotating, but an approximate analogy - the gist is the chained transformations.).

A mental image is arguably asking slightly too much. For instance, if you gave someone a verbal or written description of a dodecahedron, would that suffice as a means to help them mentally picture it? Maybe for some, but not for me (or maybe I just don't like dodecaherons like I do the other Platonic solids).

But a satisfying visual-kinesthetic explanation is possible using the idea of spin.

Rotating a solid object $360$ degrees, its initial orientation matches its final orientation. However, if the orientation is entangled with its environment, its "entangled orientation" is different. One can imagine a belt, or multiple belts, attached to a spinning cube for example:

(One can make all this mathematically rigorous by invoking homotopy.) 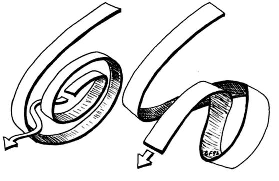 This one shows two full rotations is equivalent to no rotation, but with the belt attached (to an invisible object, say) at a different place relative to the axis of rotation.

The belt trick can also be used to demonstrate $\mathbf{ijk}=-1$, but first we have to figure out how to interpret quaternions as rotations. (The whole reason they were discovered/invented in the first place was to generalize the use of complex numbers describing 2D rotations to 3D.) Unit quaternions have polar forms $p=e^{\theta\mathbf{v}}$ for unit vectors $\mathbf{v}$ (i.e. square roots of negative one, so Euler's formula applies), and the effect of conjugating a 3D vector $\mathbf{x}$ by $p$ (yielding $p\mathbf{x}p^{-1}$) is rotating $\mathbf{x}$ around the oriented axis $\mathbf{v}$ by the angle $2\theta$.

In one of Cohl Furey's videos on octonions, she posted a very intuitive way to think about quaternions (I've linked to the appropriate segment). This gives intuition about why say, $ij = k$, and then $ijk = k^2 = -1$ follows easily. 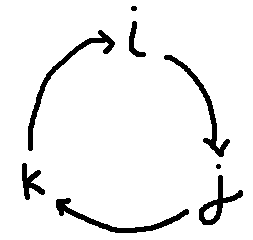 If you multiply two consecutive quantities (in a clockwise direction), you get the next value. If you move counterclockwise (i.e., against the arrows) then the same rule works but you get a minus sign. So $jk = i$ and $ik = -j$, for example.

I'm not sure if this is original to Cohl, but I first saw this in her lecture. This also might not qualify as intuition as asked for in the body of your post, but it should qualify as a mental image like you asked for in your title.

THIS IS NOT AN ANSWER - Just an appendix / extended comment that doesn't belong to the original post...

@anon's answer contains a "belt trick" to illustrate the $\bf{ijk}=-1.$ Explained in words was rather confusing, but (after his pictures holding his belt included in the comments to his post as a link, I believe the idea can be illustrated as follows:

Here is the part of @anon's answer relevant to the illustration:

Unit imaginary quaternions are of the form

It is proven here that

allowing their expression as

Not the answer you're looking for? Browse other questions tagged linear-algebra complex-numbers quaternions or ask your own question.

37
How can one intuitively think about quaternions?
8
Square roots of $-1$ in quaternion ring
8
Concise description of why rotation quaternions use half the angle
1
Deriving a Quaternion Extension of Euler's Formula

1
What does it mean that quaternions/ spinors are negated under a full rotation?
0
Orthographic distance to projection distance
0
Point in Coordinate System A, how to find its location in Coordinate System B?
0
Quaternion interpolation with SQUAD: Tangent issue
1
How to find the image of the map $\mathbf{x} \mapsto \mathbf{x}-(\mathbf{x} \cdot \mathbf{n}) \, \mathbf{n}$?
4
Quaternion sandwich simplification gives me a term too many