I am implementing an algorithm to remove projective distortions on the following image. 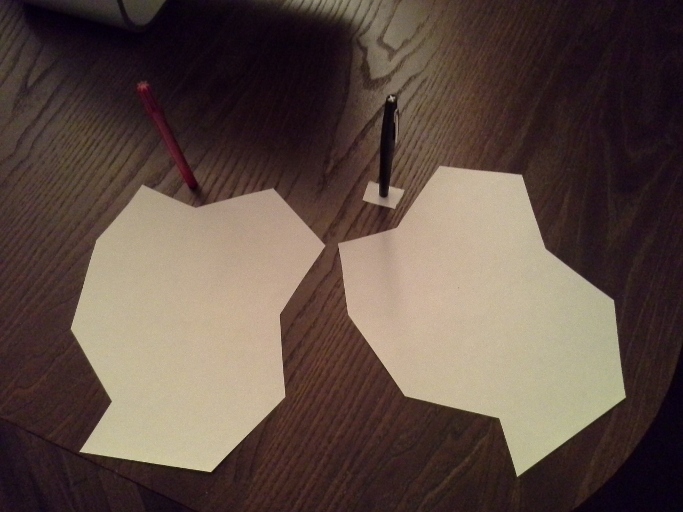 I understand this is possible by applying the following transformation:

Where $$ l_\infty=(\begin{matrix}l_1 & l_2 & l_3 \end{matrix})^T $$ is the line at the infinity. In a perspective image of a plane, the line at infinity on the world plane is imaged as the vanishing line of the plane.

I would appreciate any insight about this.

Edit: isn't necessary to follow any particular approach just remind that the planar objects are irregular (no orthogonal angles in real world) congruent shapes (they have the same shape in real world)

I will assume that the two depicted bright polygons are congruent in the world plane. If they are not, then I guess you won't have enough information to reconstruct anything.

The first step is finding a projective transformation which maps one of the polygons onto the other. That transformation is uniquely defined using four points and their images, and I've described this computation in detail in another post. So choosing any four pairs of matching corners will give you that matrix. Originally I had assumed that this is the transformation you were interested in, but I had not read the question carefully enough. The transformation you just found describes the rotation of one polygon onto the other in the image plane.

By the way: The join of the two complex points corresponds to the vanishing line. Which in your image is way outside the picture area. But knowing the vanishing line is less useful than knowing the locations of $I$ and $J$ as we do, since these points can be used to define angles, so they will help you avoid skewing.

Now you can again choose four points and their images to define a projective transformation. This time, you map the complex fixed points to $I$ and $J$, and you map the center of rotation to wherever you want it to lie in your reconstructed image, e.g. the origin. You still have one point which you can choose arbitrarily. Its image will fix the scale and orientation of the reconstructed image. Strictly speaking, you don't have to take the center of rotation as one preimage point either: as long as you correctly map $I$ and $J$ from image coordinates to world coordinates, you can choose any two pairs of real points to uniquely define the projective transformation.

I've just implemented the above description as a proof of concept using Cinderella. The center of rotation, drawn in green, appears to coincide with the upper boundary of your picture. The points P1, P2 and R2 were chosen arbitrarily. 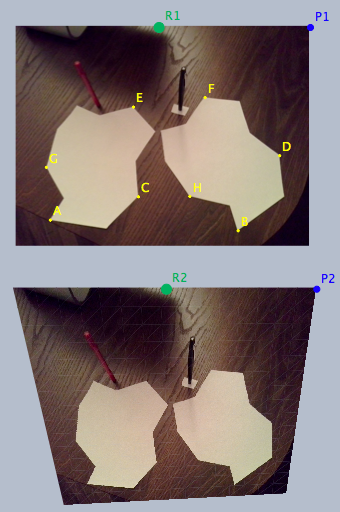 Not the answer you're looking for? Browse other questions tagged projective-geometry or ask your own question.

1
prove that the vanishing line can be determined given three coplanar equally spaced parallel lines
11
Book suggestions on projective geometry
2
Find the homography matrix that maps a 2D image point to a 3D world point on a known plane
0
Finding the distance of points after projective transformation
2
Projectively equivalent and non-equivalent configurations in $\mathbb{P}^n$
2
How to compare points in homogeneous coordinates universally?