When considering an infinite sequence of tosses of a fair coin, how long will it take on an average until the pattern H T T H appears?

I tried to break the problem into cases where ultimately the pattern HTTH appears, but that makes things complex. Any insight would be helpful.

I like Christian's answer better as it is simple. But I worked out another solution so I just added it for reference.

The desired expectation is given by

Here's yet another way of doing this.

We can be in one of $5$ states, according to the number $0\le k\le4$ of consecutive “correct” results that we currently have; e.g. $k=2$ means the last two results were HT. Let's make a graph with the transitions between these states: 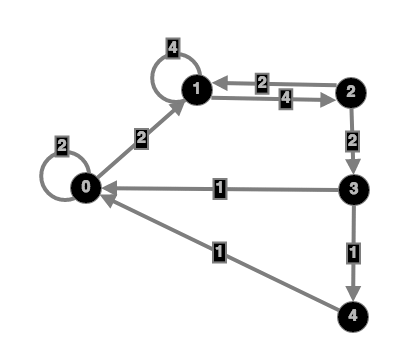 The labels on the vertices are the values of $k$. We'll get to the edge weights in a bit. In addition to the two possible transitions from each of the nodes with $0\le k\le3$, I added an edge from $4$ to $0$ to complete a round trip from $0$ to $4$ and back.

Now consider a process on the edges where in each step we go from the current edge to its terminal vertex and then uniformly randomly choose one of its outgoing edges. Then the equilibrium distribution on the edges is given by the edge weights, normalized by their sum, since by construction that lets the same probability flow into and out of each vertex in each step.

Not the answer you're looking for? Browse other questions tagged probability probability-theory probability-distributions random-variables conditional-probability or ask your own question.

3
a coin toss probability question
5
Coin Toss Probability Question (Feller)
1
Expected Number of Coin Flips to Form a Certain Sequence
2
Probability to get twice as many heads as tails at some point in an infinite sequence of coin tosses
1
Tossing coin until we obtain a tail that immediately preceded by a head
0
Expected value of probability game. Should you play this game?
0
Probability of getting pattern $HTH$ on nth flip of a fair coin