A Venn diagram is a diagram that shows all possible logical relations between a finite collection of different sets. (https://en.m.wikipedia.org/wiki/Venn_diagram)

It is easy to make a Venn diagram for three sets. Just draw three circles as shown in the figure. For four sets, it is getting more difficult. There are lot of possible ways making a Venn diagram for 4 sets (just check the wikipedia or imagine with four ellipses), but it is impossible to make it with four circles. But why?

I only know that it is impossible. I can prove it but my solution is really complicated (maybe wrong as well), but I think there might be an easy, beautiful solution.

Please help! Thanks in advance! 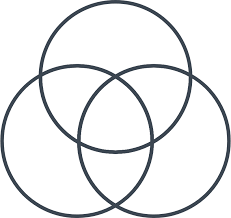 Two circles can intersect in at most two points. If you have $n-1$ circles, then adding an $n$-th will introduce at most $2n-2$ new intersections, and so the number of regions can increase by at most $2n-2$.

With three circles, one has at most eight regions (why?). Adding a fourth will increase the number of regions by at most six, so we get at most fourteen regions. Not enough.

This question was asked before on stackexachange. The answer is to use Eulers relation for plane graphs: http://www.ams.org/notices/200611/ea-wagon.pdf

So we only have to figure out the number of edges a graph of four circles can possibly have. Assume you have a graph of n circles and you add one circle. This will add new edges, depending on how many new vertices we have. On the new circle itself it will add at most 2n new edges. Every time the new circle "cuts through" an existing edge, he will devide this edge, creating at most one more in total. Thus, at most 2n + 2n = 4n new edges.

Start with one circle: 1 edge

It seems like I overcalculated the number of possible new edges in the step from one to two circles. This is because the two new intersections must devide the same existing edge (there is only one) and therefore creating only one new edge on the first circle (+ the two on the second circle, thus at most three new edges in total). So the number of edges four circles can have at most is actually 24. But 25 is good enough to show that the diagram is impossible.

I hope I didn t write completely nonsense. Its pretty late now. Youre welcome to correct :) Eulers Formula is really elegant though, so you should be happy using it in one way or other.

Edit: I just realized there is a problem with Eulers Formula if you start with only one circle. So it is probably better two start with two. But the argument should look similar then, maybe +/- 1 face. gn8 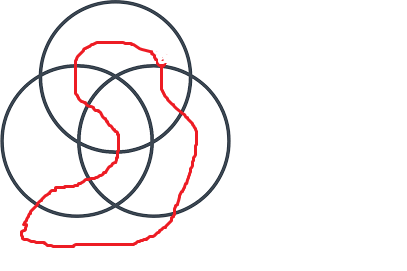 Just add another closed curve that intersects the original $8$ regions.

Not the answer you're looking for? Browse other questions tagged geometry elementary-set-theory or ask your own question.

8
Into how many parts do $n$ ellipsoids divide $\mathbb{R}^{3}$?
2
Angle of first circle where it intersects second circle
1
Why can two non-overlapping circles intersect in at most two points, while two non-overlapping ellipses can intersect at four?
0
How would the venn diagram for this logical expression look like?
0
Algebra of sets application
2
Constructing a square whose sides contain 4 given points
2
Intersection of 3 circles on equilateral triangle given the difference in their radii
23
Why can't Russell's Paradox be solved with references to sets instead of containment?
0
Venn diagram with $3$ sets