Shannon entropy of a fair dice

The formula for Shannon entropy is as follows,

Thus, a fair six sided dice should have the entropy,

However, the entropy should also correspond to the average number of questions you have to ask in order to know the outcome (as exampled in this guide under the headline Information Theory).

Now, trying to construct a decision tree to describe the average number of questions we have to ask in order to know the outcome of a dice, and this seems to be the optimal one: 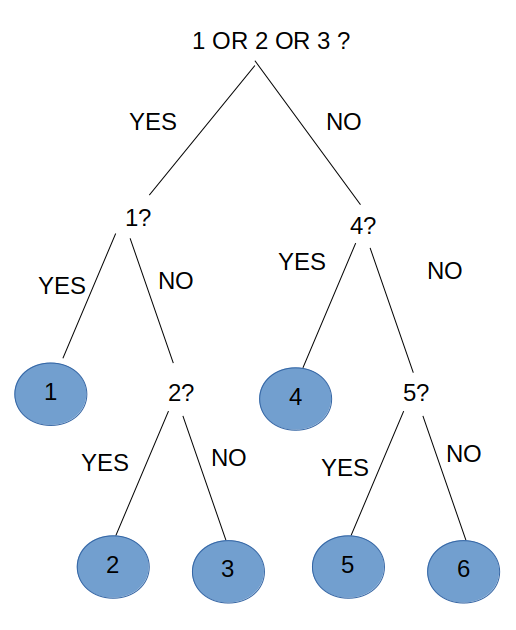 So, obviously the result for the entropy isn't the same in the two calculations. How come?

To recover entropy, you have to consider a sequence of dice throws, and ask how many questions per roll you need in an optimal strategy, in the limit that the number of rolls goes to infinity. Note that each question can cover all the rolls, for example for two rolls, you could ask at some point: “Are the results in $\{16,21,22,23\}$?” (where the first digit denotes the first throw, and the second digit denotes the second throw).

I'm too lazy to do it for 36 possibilities, therefore here a simpler example: Consider a die for which each roll gives only one of three results with equal probability. Then the entropy is about $1.58496$.

For two tosses, an optimal strategy would be to first ask “was it one of $\{11,12,13,21\}$?” (where the first digit gives the result of the first toss, and the second digit the result of the second toss). If the answer is “yes”, then use two questions to single out one of the four results. Otherwise, ask “was the first toss a $2$?”, if yes then it was one of $22$ or $23$, and one question is sufficient to determine that. In the remaining case you know the first toss was $3$ and know nothing about the second, so you employ the one-toss strategy to determine the second toss.

Note that the average number of questions of the single-toss optimal strategy can differ dramatically from the entropy. For this, consider the toss of a biased coin. The entropy of this can be made arbitrary low by making the coin sufficiently biased. But obviously there's no way you can get the result of a coin toss with less than one question.

If you have $1$ die, there are $6$ possible outcomes. Label them 0 through 5 and express as a binary number. This takes $\lceil\log_2{6}\rceil = 3$ bits. You can always determine the 1 die with 3 questions, just ask about each bit in turn.

Each order of magnitude gets you one more digit, converging toward the Shannon entropy.

On the other hand, with the decision tree in your example, you would not converge towards splitting the outcome space in half with each question. The first question $d_1 \in \{1,2,3\}$? does, but then there is waste if you have to ask two questions to determine 3 remaining outcomes. The second question (given a yes to the first), could be is either $d_1 = 1$ or $d_1 = 2$ and $d_2 \in \{1,2,3\}$?, which does split the outcomes space in half for multiple dice. Now you are forced to ask 3 questions to get the first die, but have gained information about the following dice. The strategy of enumerating and encoding the outcomes as above is just an extension of this idea. It doesn't pay off for a low number of dice, but does for many.

There is nothing wrong with what you did. In the book "Elements on Information Theory", there is a proof that the average number of questions needed lies between $H(X)$ and $H(X)+1$, which agrees with what you did. So, in terms of "questions", the entropy gives you an accuracy within $1$ question. The following argument is from "Elements on Information Theory":

Not the answer you're looking for? Browse other questions tagged probability-theory information-theory entropy decision-trees or ask your own question.

14
Most efficient strategy for guessing outcome of (fair) dice roll?
0
Information lost in going from n-dice rolls to the sum of their faces?

8
Relationship between compression, shannon entropy and kolmogorov complexity
1
Entropy Formula $\sum_i p_i log(\frac{1}{p_i})$
3
How does changing the log base affect the intepretation of information entropy
4
Why does the average number of questions/bits needed for storage in Shannon's entropy go with $\log$?
14
Most efficient strategy for guessing outcome of (fair) dice roll?
0
Entropy and its relation to proportion
1
How can I interpret a shannon entropy value less than $1$?