Impossible permutations of the Gear Cube

In case you're not familiar with a Gear Cube, it's structure is similar to a Rubik's cube except that it is geared in such a way that a half turn of any face elicits a quarter turn of the adjacent middle slice. A quarter turn of a face is not therefore possible as the middle slice would be misaligned, as in the picture below. 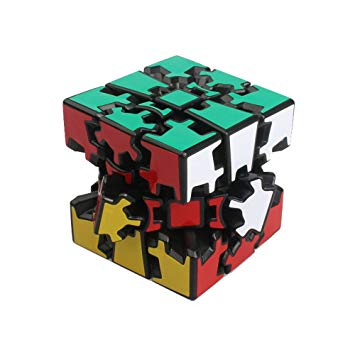 This sounds complicated, but in fact the restriction to half turns of faces, simplifies things in lots of ways. For example,

I've approached the problem by considering one corner (right-back-down) as fixed, and considering the actions of the group generated by a clockwise (half) turn of the left(L), front(F) and upper(U) faces. This restricts the number of moves to worry about and also fixes the planes in which the edge pieces move. The disadvantage is it allows the centre pieces to move, and ultimately it is the restriction on this movement that's causing me the most difficulty.

As with a normal Rubik's Cube, the centres are fixed in space relative to each other and as such their permutations are exactly the rotations of a solid Cube. This is $S_4$, and is normally seen to be such by considering the action on the diagonals. Note that these permutations determine the permutations of the 3 main axes, which is essentially $S_3$ and can be considered as a quotient of the $S_4$ mentioned earlier.

Various other sets of 4 seem to behave similarly. The action on one particular set of 4 edges can be thought of as acting on the vertical sides, horizontal sides and diagonals of the square they form, again giving $S_3$ as a quotient of $S_4$. Perhaps more surprisingly the permutations of the tetrahedron with the fixed corner operates as a quotient of the permutations of the tetrahedron of free corners.

It turns out the overall group action on each of the sets of 3 is the same, so for example if we fix the tetrahedron with the fixed corner we also fix the axes of centres. However the sets of 4 do not match up in the same way, for example a full rotation of a face fixes the corners, but not the centres and one of the edge planes.

Apparently, the permutations of the edges fixes the centres, but I cannot prove this. Has anyone got any ideas? I've tried looking at the $S_4$s from the point of view of $S_3 \rtimes V_4$, thinking that the fact that all the $S_3$s were the same would help, but it hasn't much. The behaviour of the $V_4$ bit still seems very complicated.

I hope all that made some sense to someone. Any help much appreciated!

Perhaps I can put it another way. The group is generated by 3 moves, $F$, $L$ and $U$, which can be regarded as acting on five 4-element sets: 4 free corners, the 4 cube diagonals associated with the movement of the centres, and three sets of 4 edge pieces. Thus the group can be regarded as a subgroup of $(S_4)^5$, with generators as follows:

That's pretty much where I'm stuck, as the way the group acts on $S_3\times (V_4)^5$ is not straightforward.

Having done a bit more reading, it seems that the missing tool I need is Schreier's lemma.

So we can take $H$ to be the '$(V_4)^5$' bit of the group which fixes the $S_3$ component (by fixing one/all of the 3-element sets described earlier), thereby giving us a generator set for just this '$(V_4)^5$' bit with the '$S_3$' bit disentagled, as I was wanting above. Our original group has 3 generators and $H$ has 6 cosets (one for each element of $S_3$), so there are 18 calculations, which even done manually is fairly manageable if somewhat tedious.

Ignoring the repeats, we actually get a generator in $(V_4)^5$ with 13 elements. The next step is to fix each $V_4$ in turn (by fixing one of the 4-element sets described earlier) in order to simplify things further. On the face of it the next step will have 4$\times$13 calculations, but they're much easier now we're working in $V_4$ and because it's Abelian some can immediately be identified as reordered repeats of other calculations.

In this manner, I got down to the $(V_4)^2$ bit of the group in question being generated by $\{(a,a), (b,b)\}$ from which it can easily be seen that the permutation of the final 4-element set is completely determined by the others, as required.

So that pretty much answers the question, albeit in a rather cumbersome computational way. I suspect there may be a more elegant solution in terms of group actions, so I'd still be interested if anyone can think of one!

Browse other questions tagged group-theory puzzle group-actions rubiks-cube or ask your own question.