Can the same problem be done without calculus?

I had a problem in my physics class. I have been given this diagram of a free-falling object on a fictional planet "Newtonia": 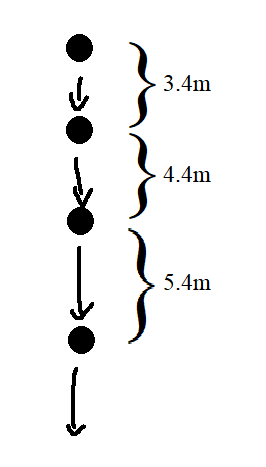 The dots represent "snapshots" of the object every second. The distances between each positions are labeled in the diagram.

From this, I had to find:

Another observation about the position function is that it will be a quadratic function like this:

Using the three points from above, I can find the equation of the position function by setting up a system of three equations:

From the first equation, it is evident that $r=0$. This simplifies the system into two equations:

The velocity and acceleration functions are first and second order derivatives respectively, so:

So what's the problem?

I am in a non-calculus physics class. My teacher told us to calculate the "instantenous" velocity at the second dot in this case by simply taking the length of the first interval ($3.4m$) and dividing by $1s$. This is obviously not true, since acceleration is non-zero meaning that the result will not be instantaneous but average velocity. It is a good approximation, but not the exact answer.

Since my physics class is a typical non-calculus high school physics class, the approximate answer given by my teacher would be acceptable I guess. But I am curious if it's possible to get the exact answers without calculus in this scenario? (I tried approaching it in different ways, but got nowhere besides getting a headache.)

Use the kinematic equations, which apply for constant acceleration. The most relevant one here is: $$ x(t)=x_0+v_0t+\frac12at^2.$$

I should add though, that the question is wrong if we have constant acceleration. Yeah, wrong. The difference between the distance travelled in each second is constant (1m/s²) which isn't possible in real life, where it should instead vary quadratically. Clearly your teacher is trying to assume an extremely simplified model and it's worthless to think too much about this problem, since the scenario is not physically possible anyway.

Not the answer you're looking for? Browse other questions tagged calculus physics problem-solving or ask your own question.

0
On the surface of the moon
1
Derivatives: Interesting (unexpected?) situations where they arise?
2
What is the acceleration of gravity acting on the object?
0
Why does something constant have a parabolic shape?
2
Pre-calculus - Deriving position from acceleration
0
Geometrical representation of speed?
0
Finding the overlap between direction of distance in position space and direction of distance in velocity space
0
Can you deduce the power rule of differentiation just by logic?
2
Calculate displacement from initial velocity, acceleration, and drag