Covering the Euclidean plane with constructible lines and circles

It is a well-known fact that the set of points which are finitely constructible with straightedge and compass (starting with two points $0$ and $1$) doesn't cover the Euclidean plane $\mathbb{R}\times \mathbb{R}$ because only $\mathbb{Q}^{\sqrt{}}\times \mathbb{Q}^{\sqrt{}}$ is finitely constructible (which is a countable set).

[Side question 1: What is the official name (and symbol) for the set which I call $\mathbb{Q}^{\sqrt{}}$, i.e. the set of those numbers that can be defined by addition, substraction, multiplication, division and taking the square root alone (starting from $0$ and $1$). Note that the set of algebraic numbers $\mathbb{Q}^\text{alg}$ allows for taking arbitrary roots.]

Does it make sense to ask – and how can it be proved or disproved – whether $\mathbb{R}^2$ might be "finitely coverable" in the sense that for any given point $p \in \mathbb{R}^2$ there is a line or circle constructible in finitely many steps (starting from points $[0,0]$ and $[1,0]$) which $p$ lies on?

[Side question 2: Can a rough estimate of the growth rate of the numbers of points, lines and circles be given, when starting with $n$ points in general or regular position?] 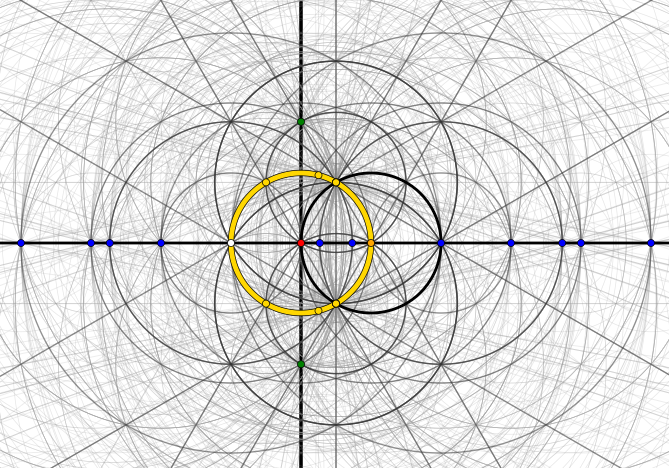 This is after two steps: 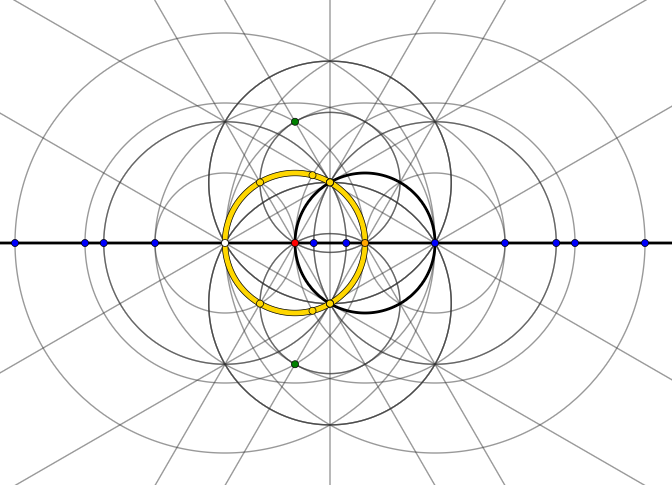 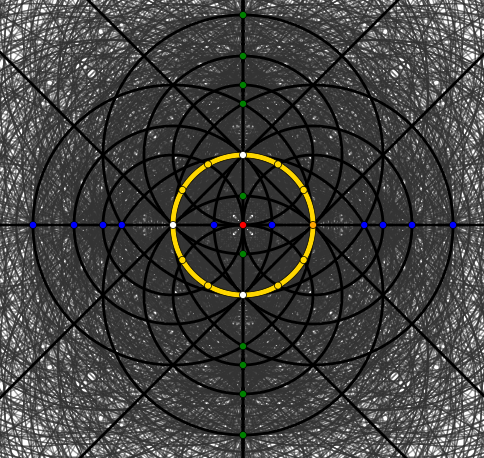 This is after one step: 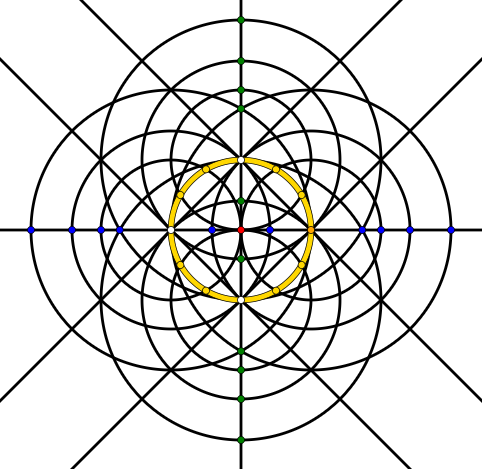 For the sake of completeness: 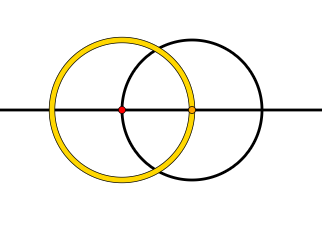 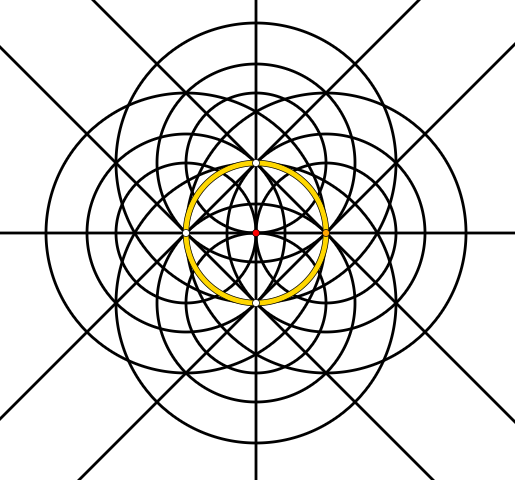 It's the countable union of measure 0 sets, so its measure is 0.

The equation for any such constructible line or circle will have algebraic coefficients. So if $x$ and $y$ are algebraically independent (say, $x=\pi$, $y=e^{\pi}$), then $(x,y)$ cannot be drawn in this way.

Here's a geometric (as opposed to algebraic) argument.

Acccumulation's answer is really the fundamental one, namely it boils down the the fact that measure zero sets are closed under countable union. But here is a concrete unfolding of that fact applied to this problem: $ \def\lfrac#1#2{{\large\frac{#1}{#2}}} $

First note that each line can be divided into countably many finite-length segments. Next note that any circle or line segment can be covered by finitely many squares with total area $ε$, for any real $ε > 0$. This is very easy for a line segment. To convince yourself concretely that it is true for a circle, impose a Cartesian plane with origin at the centre of the circle, and overlay a square grid with grid spacing $1/n$. Then in each quadrant the circle is monotonic in both coordinates and hence passes through (the interior of) at most $2(rn+1)$ squares, where $r$ is the radius of the circle. Thus the circle passes through squares with total area at most $\lfrac{8(rn+1)}{n^2}$, which can be made smaller than $ε$ for sufficiently large $n$.

This set is certainly dense in $\mathbb{R}^2$. In other words $\overline{\mathbb{Q}^{\sqrt{}}}=\mathbb{R}$. There's an area called Diophantine Approximation where one might ask how close we can get to real number with lines and circles. Also consider complexity theory.

Not the answer you're looking for? Browse other questions tagged elementary-set-theory euclidean-geometry or ask your own question.

7
The role of string in constructive geometry
0
Number of Lines formed by joining points formed by the intersection of lines in a plane
15
Constructing the incenter of a triangle in only six steps
1
Construct the trapezoid $ABCD$ with straightedge and compass
6
Drawing points and straight lines in the plane
0
Given a circle, its center, and a point on the circle find inscribed square
12
For compass and straightedge problems, are you allowed to use the compass as a ruler?
1
Intersection of a circle and a line with only compasses
0
Construction ruler and compass [logic]
5
Straightedge-and-compass construction of the “kissing circles” for three given circles