An intrinsically curved surface with no extrinsic curvature

My question is : Is the opposite true? Can I have a surface with no extrinsic curvature(due to my "clever" embedding) but is intrinsically curved? If yes, what will be a simple example?

Let's first clarify the terminology and setting. Let's assume that we have an embedded submanifold $S$ (e.g. a surface) in a Riemannian manifold $M$ (e.g. Euclidean 3-space).

"Extrinsic curvature" could mean several things, but for a hypersurface (e.g. an embedded surface $S$ in Euclidean 3-space), we could summarize by saying that an extrinsic curvature is a quantity defined by the second fundamental form, or equivalently its associated shape operator $B$. If you don't know what these things are, it's ok, you can keep reading. Think of the shape operator as a symmetric matrix depending on $p \in S$. The main "extrinsic curvatures" that are worth considering are:

That being said, if by "the extrinsic curvature" we just signify the mean curvature $\mathrm{tr}(B)$, we are just looking for surfaces with zero mean curvature, these things are called minimal surfaces. Now the question is: are there minimal surfaces that are not totally geodesic (basically, minimal surfaces that are not planes in Euclidean 3-space)? You can guess that the answer is probably "yes, there are plenty", because that's pretty much asking if there are some symmetric matrices $B$ whose trace is zero, but are not the zero matrix. In fact, the "fundamental theorem of surface theory" basically guarantees that there are many examples. You'll see examples by looking for images of "minimal surface" on the web.

I tried to give a complete and detailed answer, I hope it was useful, but if you're looking for the short answer: yes, any minimal surface in Euclidean 3-space that is not a plane has zero mean curvature but nonzero Gaussian curvature. For example, the catenoid: 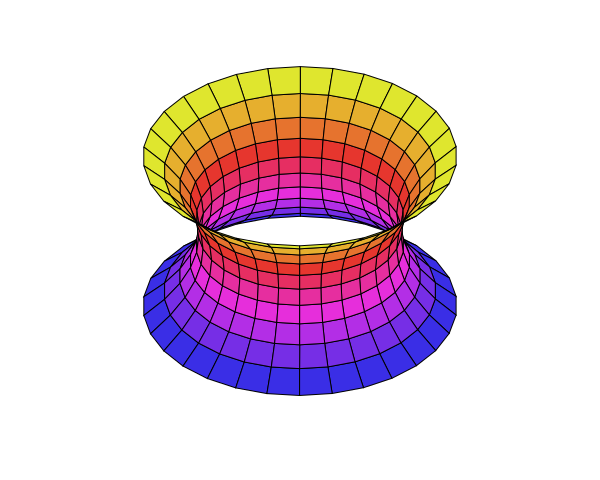 Not the answer you're looking for? Browse other questions tagged differential-geometry manifolds riemannian-geometry geometric-topology or ask your own question.