Why Is The Derivative At A Point Drawn As A Tangent Line? 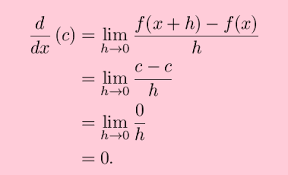 But this makes no sense to me because of 2 reasons:

So with all this, can someone explain to me how we can still draw tangent lines that have the slope given by the derivative at a given point. How can we do so when:

Thank you so much! By the way, can you try to give the explanation without epsilon delta proofs, and just at the level someone learning Khan Academy Calculus?

In the example above you can negate your worry by looking at it in a simplified way:

Hopefully this at least allays your worry of dividing by 0.

As long as you are dealing with two points the slope is the slope of secant which is not the derivative.

The derivative at a point is found by taking the limit of the slope of secant as the second point approaches the first one so the secant line approaches the tangent line.

Therefore the derivative is the slope of the tangent line and it is a limit.

We are taking the limit to make sense of what seems to be a $0/0$ which does not make sense by itself.

The point of saying the limit as h approaches zero of 4xh/h = 2x is because 'if you can't divide by zero' then obviously this equation isn't defined at zero. But if you have a function, and that function 'looks like a point is missing', say at x=4, y looks like it should be 3, then it seems reasonably to extend the function to include that point, or say that the limit as x approaches 4, of y, is 3.

How can we just assume that the slope at the point is 2, because the derivative as x+h approaches x is 2? Just because the slope is getting closer and closer to 2 as the x+h gets arbitrarily close to x doesn't mean the slope at x is actually going to be 2!

To the extent that the limit is about what the slope would be if h was zero, since 4xh/(2h)=2x for all non-zero x, then why shouldn't it equal 2x when h equals zero? If you go the other direction, 2x=4xh/(2h) then you are removing a point instead of adding one. Some limits admittedly aren't about this. The limit as x->infinity (or 'increases without bound') of 1/x = 0 stands in contrast to the fact that there is no value of x for which 1/x=0.

Not the answer you're looking for? Browse other questions tagged calculus limits derivatives tangent-line or ask your own question.

7
Why is derivative is slope of tangent line?
0
Definition of a Tangent line and Derivatives

2
Why is the derivative a limit?
2
Find the value of derivative, given that the tangent line passes through a particular point
0
How tangent line gives us a slope at one point?
3
How does the concept of a derivative solve the problem of instantaneous velocity?
1
How The Concept Of A Limit Allows Us To Move From The Secants To Tangents
2
Derivative of a single point (not a point in a function, but a point).
2
What characterizes a tangent line?
0
Does tangent line of a point on a curve really contain only one point?
0
Diffrence between undefined point and the derivative
1
Why is derivative of a function at a point the slope of the tangent at that point?