I'm trying to calculate the number of unique bracelets of length $6$ that can be made from $6$ differently colored beads. A same color bead can be repeated and used as many times as possible as the length permits.

I subdivided unique bracelet into certain combinations such as

... and so forth, I summarized results in this table:

I ended up with $3267$ unique combinations. Is this a correct calculation?

Also is there a better way to calculate this problem?

Paul Raff gave a formula for both bracelets and necklaces so in my answer, I will provide a general method that you can use for this kind of problem. It works also if you want to colour a cube for example.

As Paul Raff pointed out, you did get mix up between bracelet and necklace so in my answer I will include the answer for both of them.

Where did you get it wrong?

It seems to me that you are counting number of ways to colour a bracelet rather than a necklace so I checked your calculation with respect to colouring a bracelet. I would say that the main problem in your counting is that even for each case of the base, you cannot always guarantee to get the final result for that case by multiplying as you did. For example, in the case of $A^2B^2C^2$, we consider two following iterations:

You can use Burnside lemma where you can count the number of ways to colour the object by looking at its group of symmetry $G$. For the necklace, the group $G$ can be:

Let $X$ be the set of all possible colouring for the necklace at a fixed orientation. This follows $|X|=6^6$ as there are $6$ possible colours for each bead.

Now, in Burnside lemma, we essentially want to count number of colourings from $X$ that remains unchanged under actions from $G$. In particular:

The difference between bracelets and necklaces is in the group of symmetry $G$. In particular, for bracelets, $G$ has some extra elements: Two colourings of the bracelet are considered same if from one colouring, we can reflect the bracelet through a line to obtain the other colouring. There are two types of lines: 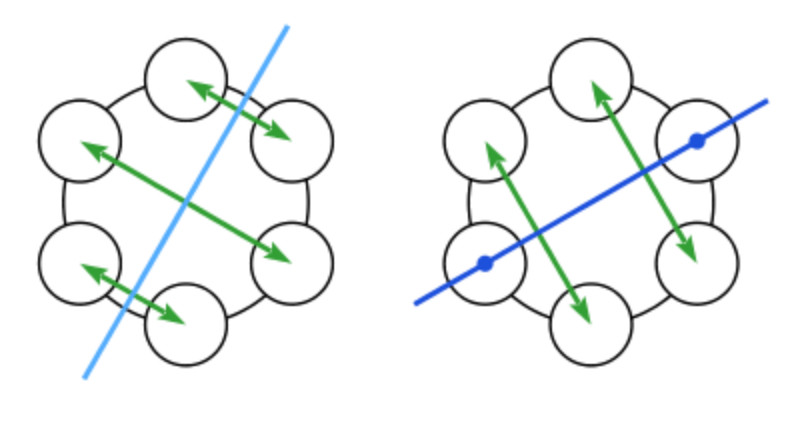 Next, we do the same thing with necklace, i.e. we count number of colourings that remains fixed under these reflections:

Your title references necklaces, but your content and your examples seemingly talk about bracelets. There's a distinction between the two that's covered in this Wikipedia article, along with a helpful formula.

In short, a bracelet allows two configurations to be equivalent if one reflects to the other (like taking it off your wrist and flipping it around). So the number of bracelets will be at most the number of necklaces, all else being equal.

The number of necklaces with $n$ total beads, created from at most $k$ different types of beads, is

Where $\varphi$ is the Totient Function. See this article for an explanation of this formula.

From this, we get the number of bracelets via

Putting this all together, the number of necklaces with 6 beads total, using at most 6 unique beads is

and the number of bracelets with 6 beads total, using at most 6 unique beads is

It's hard to know where you went astray in your calculations; for one thing, in the $AAAAAA$ scenario there is only one unique necklace/bracelet. No matter which way you turn/rotate it, it always looks the same.

Not the answer you're looking for? Browse other questions tagged combinatorics necklace-and-bracelets or ask your own question.

2
Maximum unique pairings between two lists of repeated items
6
Calculate unique combinations for unique guests per table contraint
1
unique bracelets from 6 beads, where 1 bead is a fixed color
0
k-aray necklaces with fixed/conserved positions
0
rigorous proof of simple phenomenon
2
$9$ beads on $3$ by $3$ grid such that two of the beads are not adjacent
1
Probability when choosing beads with repetitions
3
Burnside's Lemma bracelet with beads in 2 colours (uneven cardinality)
0
Number of necklaces given 3 beads that can take 4 colours