Why is the Kullback-Leibler divergence not symmetric?

As known the Kullback-Leibler Divergence:

is not symmetric. I would like to know how this can be seen from the formula. I am aware that I could just try it out with exchaning Q and P for some special case, but I would like to know the mathematical reason behind it. Also, is actually here "i" the random variable?

Thanks a lot Miau

In addition to the algebraic reason that Robert Israel gave, there's a very nice "moral reason" that the Kullback-Leibler divergence is not symmetric. Roughly speaking, it's because you should think of the two arguments of the KL divergence as different kinds of things: the first argument is empirical data, and the second argument is a model you're comparing the data to. Here's how it works.

Take a bunch of independent random variables $X_1, \ldots, X_n$ whose possible values lie in a finite set.* Say these variables are identically distributed, with $\operatorname{Pr}(X_i = x) = p_x$. Let $F_{n,x}$ be the number of variables whose values are equal to $x$. The list $F_n$ is a random variable, often called the "empirical frequency distribution" of the $X_i$. What does $F_n$ look like when $n$ is very large?

You can find everything I just said, and more, in the excellent article "Information Theory, Relative Entropy and Statistics," by François Bavaud.

* You can also do this more generally, but I don't know anything about that.

While recently studying about KL divergence, I came across the following intuitive explanation from Ian Goodfellow via an example. I hope it gives an intuitive sense as to why KL divergence is not symmetric! NIPS-2016-GAN-Tutorial 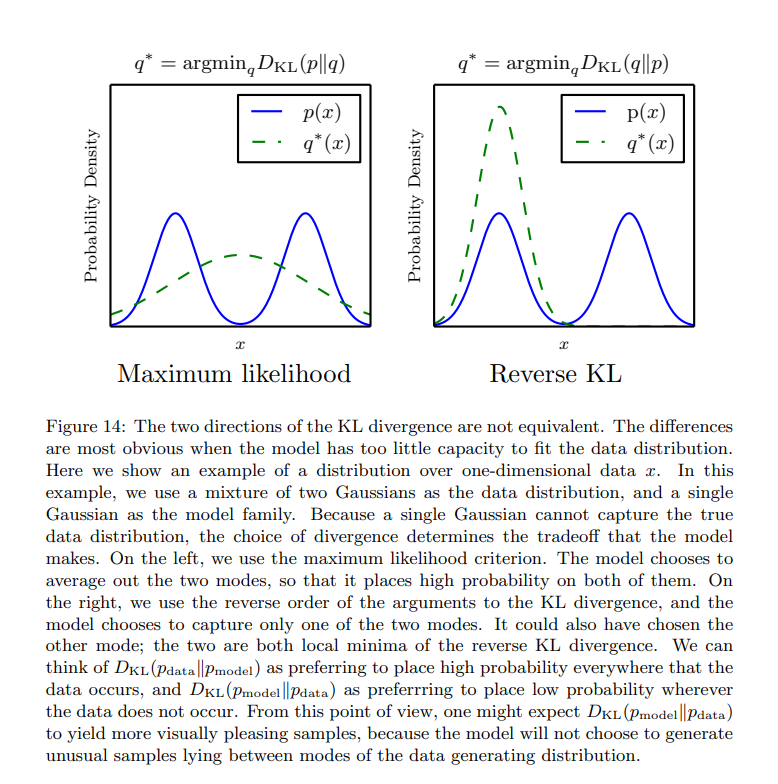 You can just look at one term under the sum, forgetting the index $i$. So if you consider:

you can see there seems to be a lack of symmetry: $p$ appears two times, $q$ only once. And this matters: suppose you take a simple linear relationship between then, like $q=\alpha p$, then

while the symmetric is:

0
How to make sense of the asymmetry of the Kullback-Leibler divergence?