I'm looking for help with: 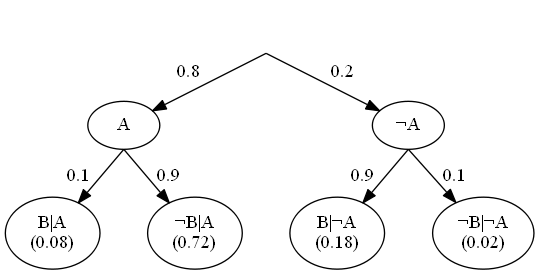 However, now I want to use this same tree to determine P(A) and P(¬A) given that B has occurred with less than 100% certainty (call this B', so that we're calculating P(A|B') and P(¬A|B')).

I think that the solution is to normalize the cumulative probabilities so that P(B') = 0.75 and P(¬B') = 0.25. Then to get the conditional probability P(A|B'), you would sum the normalized cumulative probabilities under the A branch, and likewise for P(¬A|B'). This makes sense and is a generalized form that is equivalent to Bayes Theorem when P(B') = 1.0 and P(¬B') = 0. That said, I am not 100% confident in this solution (no pun intended) as I could not locate any corresponding examples or explanations. 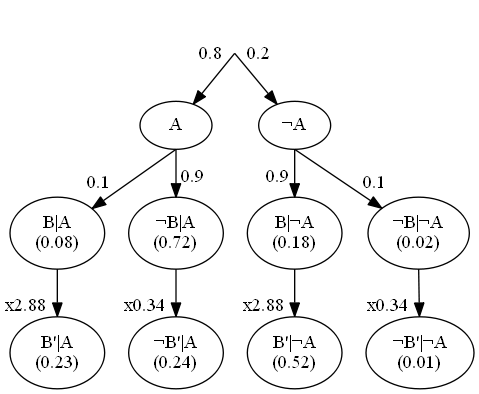 I don't want to reinvent the wheel but I have not been able to locate any guidance on this kind of scenario. So, can you please confirm that the calculation is correct? And does the updated tree make sense as a way to visualize and present the situation? Or do you know of any resources that address this scenario in a more standardized way? Thanks in advance.

So use the Law of Total Probability.

Upon revisiting this question, it occurred to me that the uncertain conditional event is no different than adding another conditional to the tree to capture whether the observation of the event is accurate. So if C = observation is accurate, then the new probability tree is

In this case, the 25% reduction in observation accuracy has doubled the conditional probability for A!

Not the answer you're looking for? Browse other questions tagged probability conditional-probability bayes-theorem or ask your own question.