It's obviously not the Closure axiom, and after some inspection, I believe the Inverses axiom does fail.

However, I'm not so sure how to show whether or not the two other axioms fail (Identity and Associativity).

None of the properties fail automatically

For any group property, you can always find a Cayley table where there's a duplicate entry and yet that property still holds. Here are examples for each:

However, either associativity fails or inverses fail.

Groups can't have repeat entries. Therefore, if a table has repeat entries, it's not a group. If it's not a group, then it's not in the green region of this diagram. Visually, you can see that such a table can't be both associative and have inverses at the same time. And you can show that there exist tables with duplicate rows that belong to any other non-green region of this diagram. 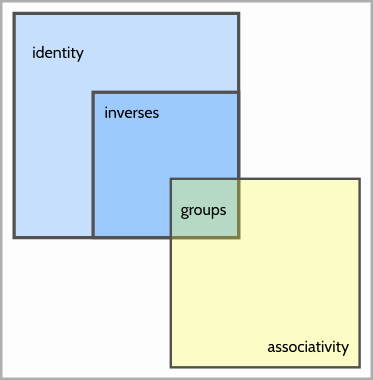 Update: The proof I gave that you can't have inverses at all assumed associativity. Out of the three properties in question (identity, inverses, associativity), you can have any combination whatsoever as long as it does not have both inverses and associativity.

This change can be made without affecting the identity, though it doesn't have to. As an example, consider the additive group $\mathbb{Z}_2$ with $1+1=1$ instead of $1+1=0$. By inspection of the 3 relevant cases, there is still an identity in this set and operation even though rows and columns have duplicated information.

That isn't mandatory. The offending definition could just as well have been $0+1=0$, with nothing else changed. One could easily verify that the resulting set and operation do not have an identity.

If there is not an identity, inverses don't exist. At least, the definitions of inverse that I'm familiar with explicitly define such a thing in terms of an identity.

If there IS an identity, inverses still don't exist. Consider (with multiplicative notation and an identity of $e$) the equation $ax=bx$ corresponding to a row with duplicates if $a\neq b$. Note that if inverses existed we would have $ae=be$, but since $e$ is the identity we have $a=b$, violating $a\neq b$.

Associativity can go either way. The object $\mathbb{Z}_2$ with $1+1=1$ is associative and even has an identity. As far as modifications to $\mathbb{Z}_2$ are concerned, there are non-associative options as well (like all additions being $0$ except $0+1=1$), but none of them have a proper identity.

Not the answer you're looking for? Browse other questions tagged group-theory axioms semigroups monoid cayley-table or ask your own question.

5
Cayley table property of an infinite group
0
Uniqueness of Inverses in Groups Implies Associativity Holds?
3
Completing Cayley table for a group
2
How to show that this Cayley Table does not form a group
2
Examples of a cayley table that represents a structure that satisfies all group axioms except associativity
0
Checking inverses axiom from Cayley table
5
Does having exactly one of each element in every row and column of a Cayley table ensure that it’s a group
0
Up to what level can associativity be guaranteed?
0
Cayley Table to Check Group