Suppose a CW complex $M$ is given by the union of $n$-spheres, namely $M=\bigcup_{\alpha\in A}S^n$, without knowledge of intersections. The only requirement is that the union covers $M$. Let $\Sigma=\{S^n,\dots,S^n\}$ be a finite collection of sets, with cardinality $|A|$. The nerve consists of all subcollections whose sets have a non-empty common intersection, $\text{Nrv}(\Sigma)=\left\{X\subseteq\Sigma\big|\bigcap X\ne\emptyset\right\}$, which is an abstract simplicial complex. The nerve should look something like this (e.g. a Čech complex): 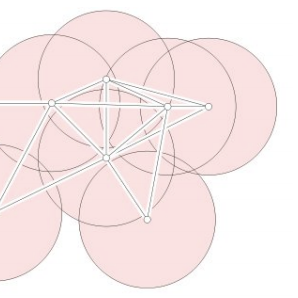 As mentioned by Mike Miller, the condition we want is that the $k$-fold intersections, for $k$ sufficiently large, are all empty or contractible. Then the Čech complex of this cover (with constant sheaf $\mathbb{Z}$) recovers the homology of the manifold. The general case where $k$-fold intersections are not contractible instead takes the form of a spectral sequence involving cohomology of the various intersections. I am not sure, however, how to make this mathematically precise.

Any help would be much appreciated. Thanks in advance!

Very interesting question, unfortunately this is not enough to know the nerve. For an explicit counterexample consider $M_1$ and $M_2$ given as the union of two circles, where the circles in $M_1$ intersect twice and the circle in $M_2$ intersect four times. The nerves are isomorphic but the homology groups are not isomorphic.

When the covering is given by open balls, in order to be able to compute homology using the nerve you need to assume strong conditions on the intersections (they should be all contractible or empty) on your cover. You need probably strong conditions here too but I can't think of a good condition right now.

Not the answer you're looking for? Browse other questions tagged algebraic-topology homology-cohomology computational-mathematics computational-geometry or ask your own question.

0
What does it mean that if the cover of $k$-fold intersections is not contractible it takes the form of a spectral sequence of cohomology?

18
Twisted Cech cohomology
16
Nerve Theorem: Is the finite union of closed convex sets triangulable?
2
How do we re-arrange a manifold cover without information on component-wise intersections in such a way that homology is computable?
1
Examples of generalized homology spheres which are not triangulations of spheres
2
How is the Cech complex a subcomplex of the Vietoris Rips complex?
3
Connected covering spaces of the 2-sphere with a diameter and a disk.