How to project a 3D-point on a 2D-plane relative to an observer?

In a 3D-space there is a random number of objects ($X$s) of which their exact position is known.

These objects can be observed through a "screen" which has a certain dimension, position and orientation.

Its position and orientation is related to point $P$. The "screen" can be moved around this point with a fixed distance.

(I'm imagining the "screen" moving on the hull of a sphere around $P$ and the line of touching point and $P$ is always orthogonal to the plane).

Then, there is the observer point ($O$) which is on the opposite side of $P$ related to the plane, maybe with the same distance or less.

The observer now looks "through" the "screen" into the 3D world and sees some of the $X$s.

My questions is, what approach should I follow to calculate where the line between $O$ and one of the $X$ touches the "screen"? What variables do I have to calculate?

My math-lessons date and I'm a little bit rusty when it comes to terms and ideas. Please bear with me and do not hesitate to ask for more details.

Also, I'm aware that this is a quite complete problem-question, but I prefer to ask one big question and maybe get a new idea of how to get along rather than thinking about it on my own and asking only detail-questions and missing out the genius idea.

Finally I got to the point to advance and I found Geogebra. Which helped me to understand and simply my problem.

Here's what I'm doing to get the point the screen's intersecting point of $O$ and any $X$: $B$:

Given are $X$ (Object), $P$ (Position) and $O$ (Observer position, derived from two given angles).

That does not yet give me the relative coordinates of $B$ on the screen. But this is out of scope of this question. 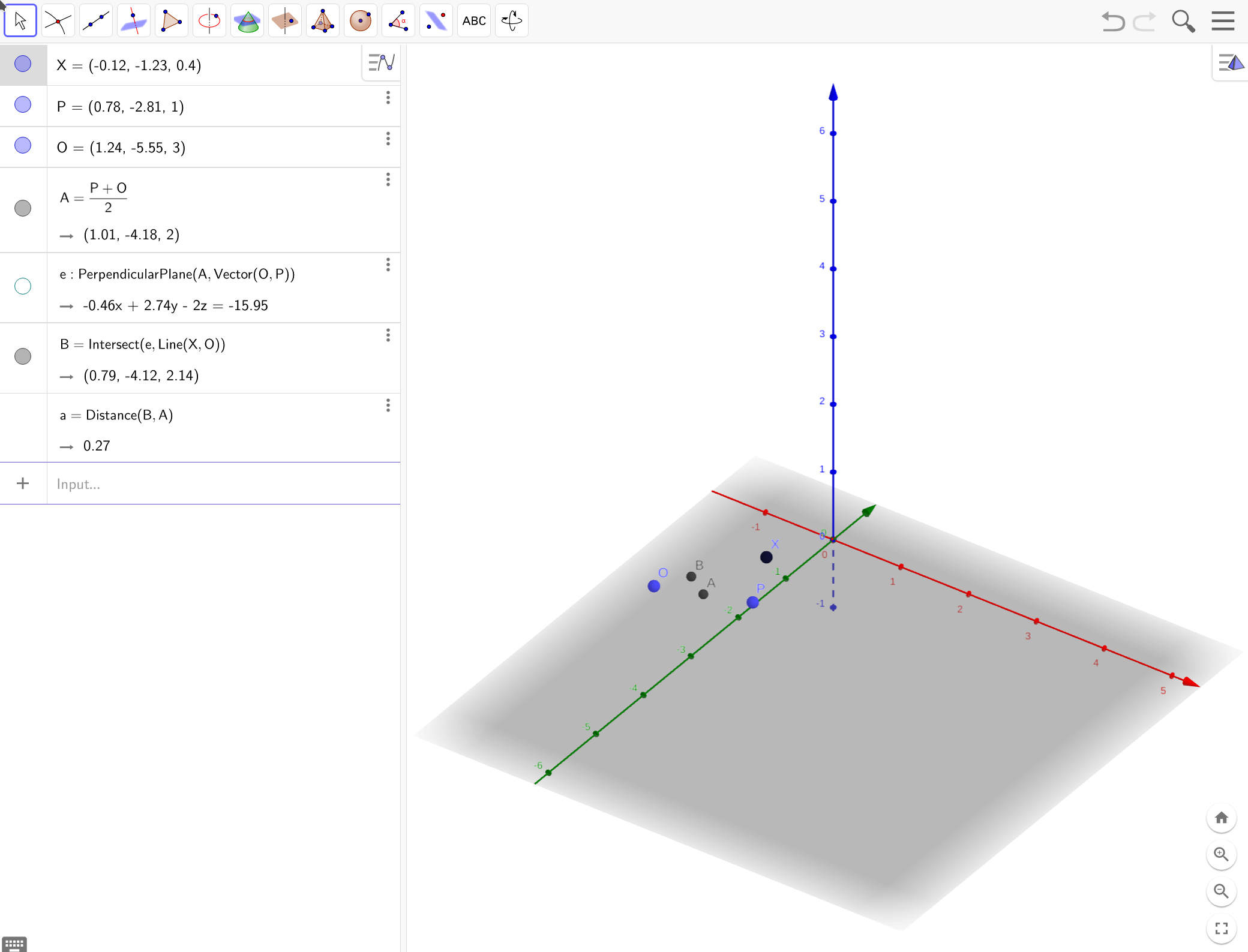 Not the answer you're looking for? Browse other questions tagged trigonometry 3d or ask your own question.

6
Line and plane intersection in 3D

1
Keeping camera and focal point relative after translation
1
Can someone explain how this trigonometric expression works?
1
Given velocity and position, when does it hit the plane?
4
How to find perpendicular distance from point to plane in $3D$.
3
Unprojecting a 2D point to 3D space on a plane with perspective.
2
General method to find the perpendicular distance between a plane and a point.
4
Projecting a grid on a 2d plane
2
Geometry of point blocked by a sphere