What give rise to the apparent quasiperiodicity of integer multiples of $\pi$ and $e$ plotted here? 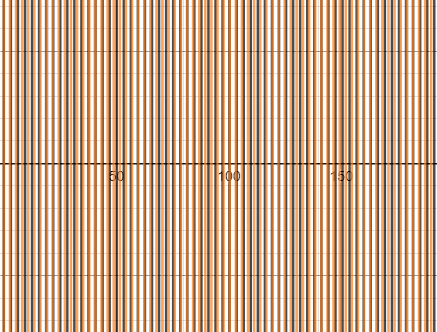 To investigate further, I zoomed in and comparing the fringes, and noting it is not quite periodic at all, as the spacing between the multiples of $e$ and $\pi$ when they almost overlap is different from fringe to fringe and those spacings (the width between the black and yellow lines within each red pointed arrow region) does not follow any recognisable pattern

To avoid human bias of the tendency to recognise patterns when there isn't any, I investigate further by comparing between where I think the bunchings are (black doodles) and a regular reference point which drew lines for the 2nd to 6th yellow line in the plot, skip the next two yellow lines, and then repeat the pattern again (red doodles, 0th line is the origin on the left). I also count every 6th black line, which often have a yellow line very close to them, and mark those positions with cyan.

I then noticed even at these more coarse graining, the position of the center of these fringes drift erractically but slightly (roughly by 1 integer) as it proceeds to the right (emphasised by the black braces where the single ones mark 3 integer spacings and the fused braces marked when there are 4 integer spacings. The drifting of the fringes is also apparent when comparing its positions with the red doodles, showing it gets less line up as it proceeds)

Also, technically at the 8th fringe and the 4th yellow line in that fringe (focus on the rightmost black doodle), the pattern kind of breaks down since there are no multiples of $\pi$ (represented by purple lines) that are closest to it as the nearest one is at least 0.5 units away.

Here's the link to the plots for you to play with https://www.desmos.com/calculator/0suntwa7ya

In some regions the lines of $\pi \mathbb{Z}$ and $e \mathbb{Z}$ will almost coincide and there the graph will look less dense, while in other regions the opposite will occur.

Not the answer you're looking for? Browse other questions tagged elementary-number-theory irrational-numbers quasiperiodic-function or ask your own question.

3
what is the largest number here?
13
Which number base contains the most Palindromic Numbers?
28
Structures emerging in a discrete plot of palindromic numbers
1
The Set of integer multiples of two irrational numbers is dense in reals?
24
An enigmatic pattern in division graphs
2
The slope of $nx\ \%\ m$