Orientability is not needed. Indeed, one can deduce unorientable version of Gauss-Bonnet theorem from the orientable one :

Let me give you an example, a Möbius strip. Its Euler Characteristic is $0$. The most convenient metric on the Möbius strip is a flat metric; such Möbius strip can be realized as a quotient of a flat strip with parallel geodesic boundaries. With such a metric, $K=0$ and $k_g=0$, so the LHS of the Gauss-Bonnet theorem is $0$ as expected.

Another easy proof is to cut your surface into small orientable pieces. It is not important whether your original surface is orientable or not. Gauss-Bonnet theorem holds for individual pieces, and when you glue them back, boundary terms corresponding to seams cancel out. In this way it is easy to see that orientability is not important at all in Gauss-Bonnet theorem for surfaces.

Following the OP's request, I'm posting the details of my computations for the explicit embedding of the Möbius strip $M$ in $\Bbb R^3$. The orientation of (halves) of the boundary curve turns out to be the crucial matter, as I'd suspected. Although the theoretical arguments are compelling, I remain confused about what's wrong with the following computations. I can now vouch that the numerics are correct.

Now, $E_v/\sqrt E$ is rather a mess, but, using Mathematica to do the numerical integration, we find that this integral is (approximately) $-1.97$. [The most basic check is that it's negative, as we have a non-developable ruled surface.]

To double-check this computation, let's remove a tiny bit of our Möbius strip, say the region corresponding to $0\le u\le \varepsilon$. This leaves us an oriented surface, for sure. Its boundary has two extra pieces, $u=0$ (oriented downward) and $u=\varepsilon$ (oriented upward); these have no contribution, regardless of $\varepsilon$, since the $v$-curves are line segments and have no geodesic curvature. The main discrepancy, however, is the reversed orientation on the segment $v=1$. Indeed, for $\varepsilon$ very small, the $v=1$ integral is now approximately $+4.53$, and — mirabile dictu — note that $$-1.97 + 4.53 - 2.56 = 0,$$ as it should! (The exterior angles of the "rectangle" contribute the $2\pi\chi = 2\pi$.) But I emphasize that when we've removed a bit of the Möbius strip to make an oriented creature, we do not have (almost) the same boundary curve as the Möbius strip. This difference, as far as I'm concerned, is what messes up the Gauss-Bonnet Theorem. One more comment: The definition of $\kappa_g$ (as $\kappa\mathbf N\cdot(\mathbf n\times\mathbf T)$, where $\mathbf T,\mathbf N$ are the Frenet frame of the curve and $\mathbf n$ is the surface normal) makes it clear that when we have an oriented surface with boundary, the sign of $\kappa_g$ does not change if we reverse the orientation of the surface; for when we do, we change both $\mathbf n$ and $\mathbf T$ by a sign. But, if we interpreted $ds$ in this integral as a measure, as @SunghyukPark suggests, it surely must be consistent along the boundary circle of the Möbius strip, so we cannot just switch the sign of half the line integral. ... 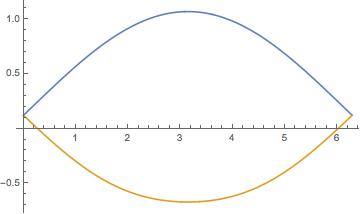 This is more of an extended comment than a complete answer, but hope that it will close the question.

Applying a little Googlomagic (namely, searching for "gauss-bonnet non-orientable") it is possible to find out the following:

On a side note, the Pfaffian has nothing to do with the orientability, bit rather with the dimension: it is defined in even dimensions (thus, in dimension 2 as well). See, maybe, here for the details.

Not the answer you're looking for? Browse other questions tagged differential-geometry algebraic-topology surfaces orientation non-orientable-surfaces or ask your own question.

15
About Gauss-Bonnet Theorem
4
Why does the Gauss-Bonnet theorem seem to work for some square boundary identifications but not others?