Visualising the difference between scalar and vector fields

I know the definition that scalar fields output numbers (magnitudes) for a particular point in space (in its domain) while vector fields output vectors but I am having a hard time visualizing the difference between them.

I am also having trouble understanding why a scalar cannot have a direction? Isn't the magnitude of scalar e.g a Heat source would continuously increase if I go in radially? why isn't this a direction defining the scalar field?

I need a geometrical interpretation that relates to our physical world objects to develop the understanding cause right now it's all messed up.

There aren't many questions about this on SE and even they don't quite explain the point (generally).

I understood it with several resources present online.

Scalar fields are pretty much easy to visualize as they associate a magnitude to a particular point in a space. For example Lets assume a Temperature field with a heat source (100$^\circ$C) at the origin and Function be :

Its pretty much clear that each point in space will have a temperature associated to it, if we go away from that source the temperature will decrease while going towards the source will increase the temperature (100$^\circ$C at the center). If you were there at position $x_0,y_0$ you would "feel" the temperature $T(x_0,y_0)$ due to the scalar field. Remember there is no direction here.

One may intuitively feel (that's where I got confused) that the direction is radially in or out due to the increase or decrease of values and yes that's a vector but it's not $T(x,y)$, its $\nabla T$ or the gradient of T and the vectors of this field essentially point in a direction which would allow us to reach the maximum value of the function (here its the center of the heat source) in the fasted way possible (least amount of change in the input) or the direction of steepest ascent. Here is how it would look for the given scalar. 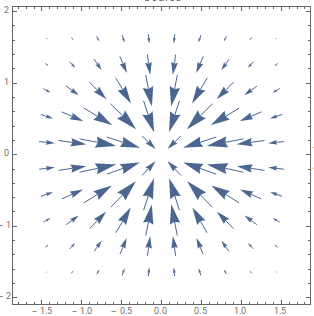 Check it at WolframAlpha. The directions of the vectors are pretty much self-explanatory here. To go to the heat source (maximum function value) directly you would have to go straight. This is a very simple example but the important thing is the idea. A better view of the gradient can be seen using the below code at Wolfram Cloud.

Now for a Vector field. If you go by the definition, it outputs a vector for every point in space (in it's domain) but it's hard to imagine a vector field. The simplest way to understand it is by using an imaginary particle/fluid flow in a vector field. Each and every vector in the field has a direction associated to it, this "direction" part of the vector shows the pattern of flow of the particle as if it were in the field. The magnitude of the vector would denote how strongly the field is causing the flow of the particle or how strongly it's responsible for it's motion.The essential conclusion is that the vector field is a sort of a force field (effecting different particles accordingly with respect to the nature of the field: Electric, magnetic, gravity, etc.) and the force is experienced by the particle in the direction of the vectors for that specific point in space.

The below GIF is from a video from Khan Academy demonstrating the particle (or fluid) flow. The function is $\vec{V}(x,y)$

It can be seen clearly that the particles move in the direction of their nearest vector and the speed varies with vectors of different magnitude influencing them to move. 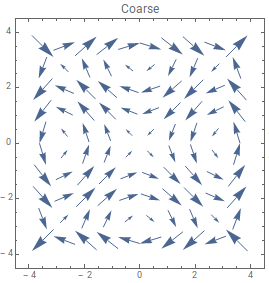 See it at WolframAlpha or try the below code at Wolfram Cloud for a more precise view.

Not the answer you're looking for? Browse other questions tagged calculus intuition vector-fields scalar-fields or ask your own question.

5
Understanding directional derivative and the gradient
3
Negative Divergence of Radial Vector Fields?
0
Difference between the notions of Real multivariate function and Scalar field and also between Vector multivariate function and Vector field
1
Divergence of Vector Field: Maximizing, Normalizing, Singularities, Interpretation
3
why the curl of the gradient of a scalar field is zero? geometric interpretation
3
Making the rigorous link between the conceptual interpretation of curl and the formula
1
Why is does this vector field have zero-curl everywhere? Plus, broad questions about curl.
3
Total and partial derivative terminology in scalar- and vector-valued functions of scalars/vectors
1
Gradients, Directional Derivatives and Change in Scalar Functions