Other intersection of common tangents

Suppose I have two conics, $A$ and $B$. In general these have four common tangents. Let $p$ be the point of intersection of two of these tangents, and $q$ the intersection of the other two.

If you prefer, you might consider the dual problem: two conics $A,B$ intersect in four points. Let $p$ be a line through two of them. Find rational coordinate functions describing $q$, the line through the other two. But subsequently I'll stick to the first formulation for the sake of consistency.

When I wrote about rational functions of coordinates, here is what I had in mind: assume $p\in\mathbb{RP}^2$ is given in homogeneous coordinates. The conics are best considered in their dual representation, i.e. a line $g$ is tangent to $A$ if $g^T\cdot A\cdot g=0$ with $A$ being some symmetric non-zero matrix, possibly singular in the case of a degenerate conic. If it is of any relevance, you may assume you have the primal matrix, too, to describe the conic as a set of incident points. For non-degenerate conics that would be just the inverse.

This operation is problematic because its definition depends on $p$ being an intersection of two tangents (i.e. $p^TAp=p^TBp=0$). If there exists some nice generalization which does what I describe for these intersections of common tangents and some other well-defined one-to-one mapping for all (or at least most) other points in the plane, then describing that generalization might in fact be easier.

I first thought of this problem in the context of Properties of hyperbolic conics? There intersections of common tangents serve as foci of conics in hyperbolic geometry, and pairs of foci might have interesting properties regarding reflections in the conic.

Of particular interest is the case where $$B=\begin{pmatrix}1&0&0\\0&1&0\\0&0&0\end{pmatrix}$$ which is the dual fundamental conic of Euclidean geometry, which factors into the complex conjugate ideal circle points $[1:\pm i:0]$. With that conic fixed, the pairs of points $p,q$ will be foci of the conic $A$, so the task is that of finding one focus, given the other. That specific problem can be generalized to $q$ being the reflection of $p$ in the center of the symmetry of the conic, even if $p$ is not a focus. But I don't see how such a formulation would generalize to $B$ being non-degenerate. Perhaps there is another way to think about this specific Euclidean problem which leads to a natural projective generalization.

What I have so far

Here is what I have so far. Pick a random line $r$ through $p$, distinct from the common tangents. Compute $C=(r^TBr)A-(r^TAr)B$ which ensures that $r^T\cdot C\cdot r=0$. Geometrically speaking, find a linear combination of the conics such that the random line is a tangent, too. Since linear combinations share the original common tangents, there are now three tangents through $p$ to $C$. Which means $C$ must be degenerate, factoring in a pair of points, with $p$ being one of them, and $q$ being the other. Therefore $C$ is of rank $2$ or less, and can be written as $p\cdot q^T+q\cdot p^T$, which can be solved for the coordinates of $q$. If $p$ has only non-zero coordinates, then one easy way to extract $q$ would be taking the diagonal elements of $C$ and dividing each by the corresponding coordinate of $p$.

Having to choose a random line $r$ makes this ugly. It requires an additional check to ensure that $r$ is not one of the common tangents, because in that case $C$ would not be uniquely defined. Splitting the matrix to extract the individual points is easy for a concrete example, but hard when done with variables for input, because the fact that the matrix is supposed to be singular is not apparent in that formulation using variables.

To demonstrate the problem and my approach above, here is one specific example:

which satisfies $r^T\cdot p=0$. Then I compute

as the second point. The corresponding geometric situation, with $p,q$ as foci of the hyperbola $3x^2-y^2+2y=4$, is this: 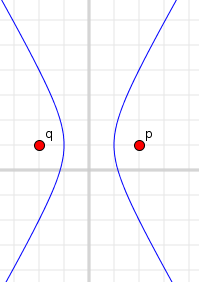 I've made some progress. If $p,q$ form a pair of intersections in the sense of the question, then

since the pencil of (dual) conics spanned by $A,B$ will contain that pair of points as one of three degenerate cases. So $C=pq^T+qp^T$ is linearily dependent from $A$ and $B$, which can be written as

You can check this condition by verifying that each of the $3\times3$ minors of this matrix is zero. There are $\binom63=20$ such minors, so there are $20$ equations to satisfy simultaneously. Each equation is linear in $q$, so it can be seen as a scalar product with $q=(q_1,q_2,q_3)^T$. Scalar product between two vectors being zero can geometrically be interpreted as a line-point incidence, so the coefficients of each equation encode a line. $20$ lines lead to $\binom{20}2=190$ possible points of intersection. After removing common terms from the homogeneous coordinates of these points of intersection, and normalizing signs, $115$ distinct points remain, unless I made a mistake in my Sage computation. These are quadratic in $p$ and linear in $A$ and $B$.

If $p$ is a point of intersection of common tangents, then all $115$ of these formulas will lead to different multiples of the same point $q$. Some of them may be the null vector, though. So I've gotten rid of the random choice $r$ mentioned in my question, but not of the case distinction needed to avoid hitting one of the null solutions of any single formula. I still hope for some input on that.