Call a strip black if it endpoints are black. A peak is a cell with only one neighbor. 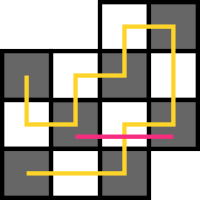 If $R$ has peaks, we can find an example where it fails: 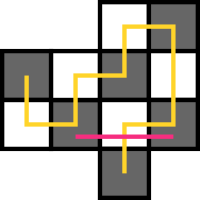 Background: This idea occurred to me while trying to find a proof for this:

Is every "even" polyomino with one hole tileable by dominoes?

The idea was roughly to take $R$ has the even polyomino with the hole filled, and $S$ as the hole. Then tile $R$ by dominoes, except for the last $k$ cells along the path (where $k$ is the number of cells in $S$), and cover the last $k$ cells with monominoes. We can then shift monominoes along the path, and if everything works out just right we can position all the monominoes over the hole and so find a tiling for the remaining figure.

Here is what I mean with shifting a monomino:

(It did not work, because some even polyominoes are not strip polyominoes, for example positioning five $3\times 3$ squares in an X.)

In regions without peaks, there is always a cycle (a sequence of cells that form a path, with $C_1 = C_k$, not necessarily all the cells in the polyomino); this may be relevant. (See for example Tiling figures of the plane with two bars , proof of Theorem 3.5 p.9.)

I added the graph theory tag because it feels like slicing and splicing paths may be a way to answer the question.

If I understand your definitions right and if you'll forgive the crude MSPaint diagram, I think this example shows that such a polyomino can be nontileable. Here the orange line traces out the strip for $R$, the pink line traces it for $S$, and the light/dark gray squares are the squares remaining in $R-S$, which are clearly non-tileable. 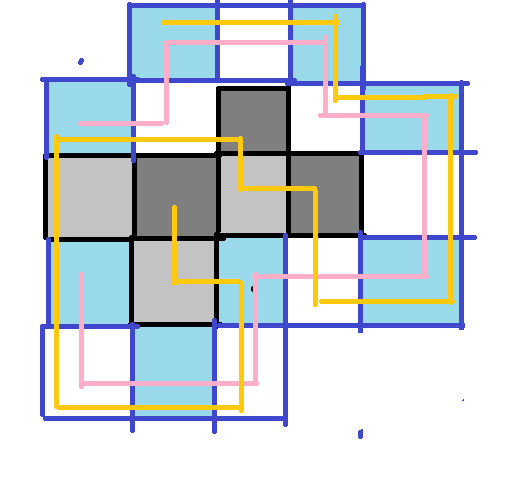 Edit: on second thought, a simpler example can be found in the 3x3 square, where $S$ is again traced out by the pink line: 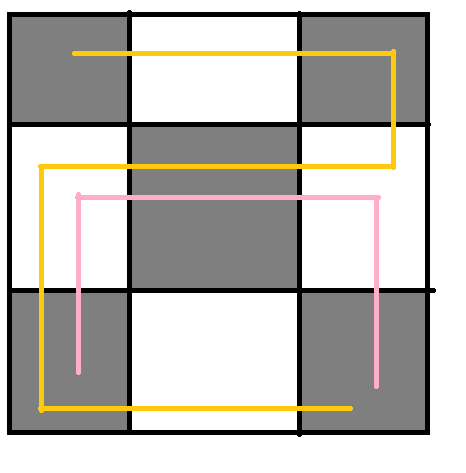 Not the answer you're looking for? Browse other questions tagged graph-theory tiling polyomino or ask your own question.

15
Is every "even" polyomino with one hole tileable by dominoes?

7
Is it known whether strips cannot be tiled aperiodically with a single tile?
5
Elementary proof of transformations of domino tilings.
15
Is every "even" polyomino with one hole tileable by dominoes?
7
Are all polyominoes with even sides tileable by dominoes?
4
How many colors are necessary for a W-polyomino to never cover a color more than once?
22
What is the smallest polyomino that can't surround a $1\times 1$ hole?
7
Are the only polyominoes that can tile triangles right trominoes?
8
Can every polyomino of even size be tiled by $L$-trominoes when scaled up by a factor of $3$?