This question is similar to this one: Properties of King's Dream fractal

I accidentally modefied the formula to the following:

So just the sign of $c$ is flipped, so the fractals are really the same.

I'll give a short description of how it is generated. 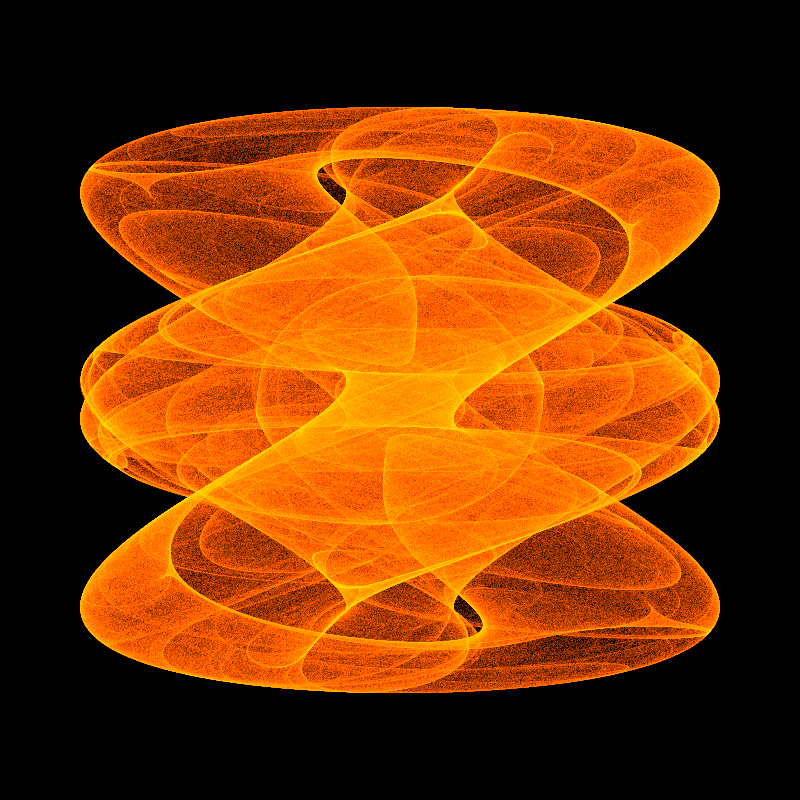 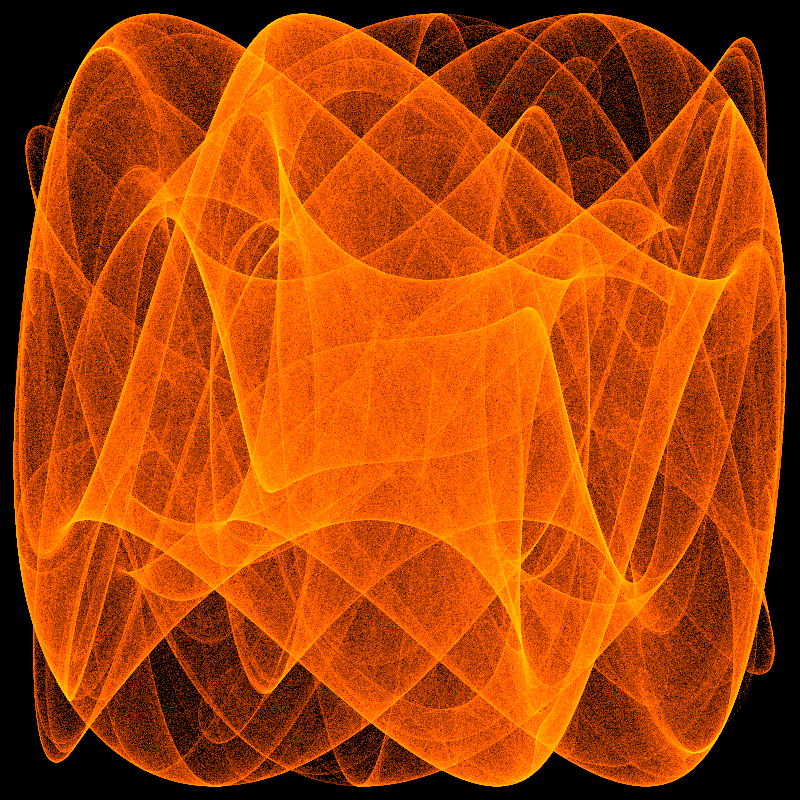 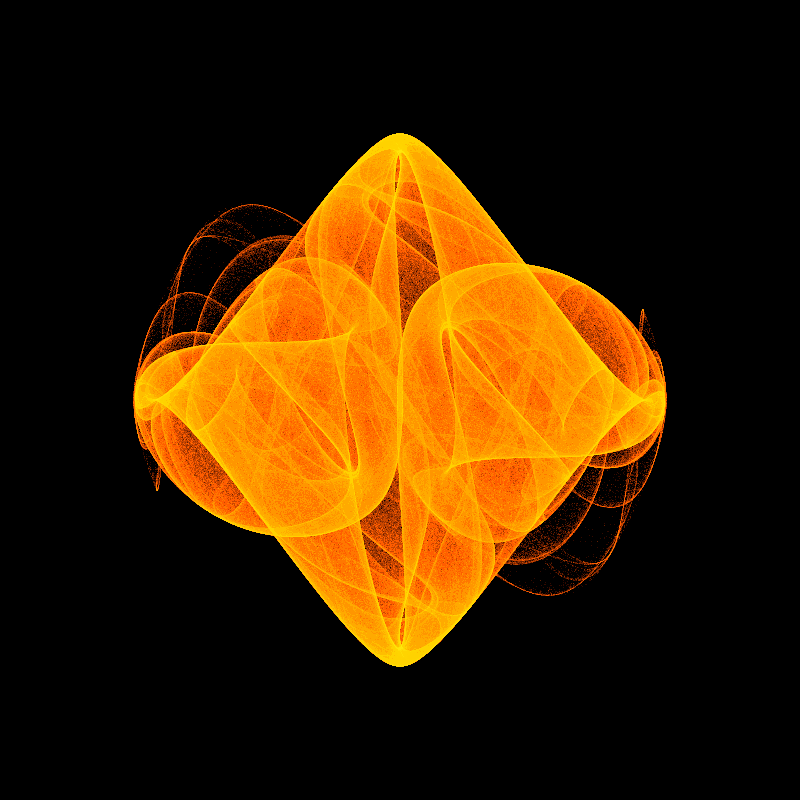 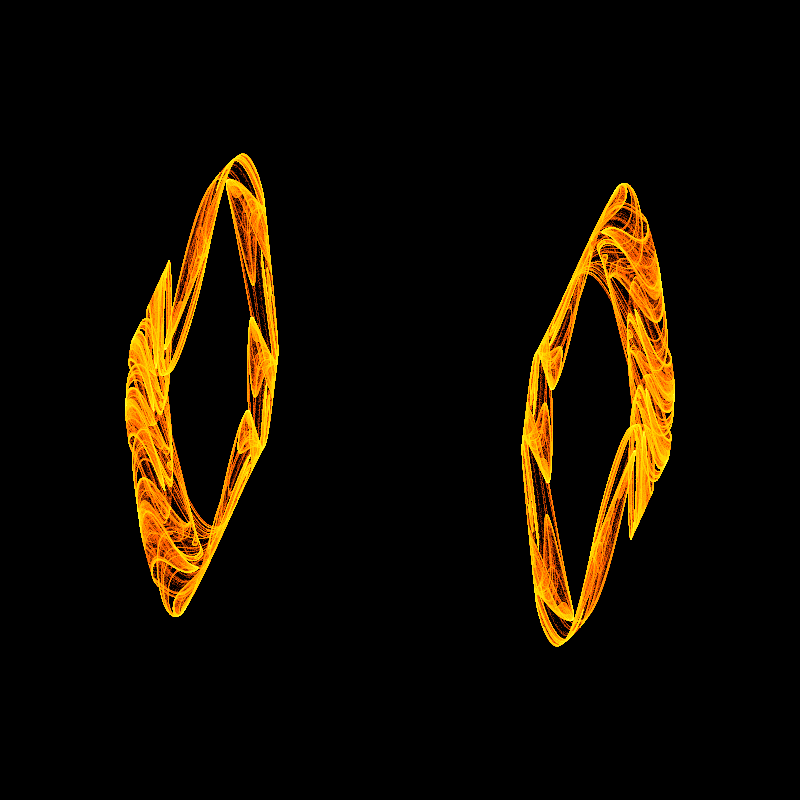 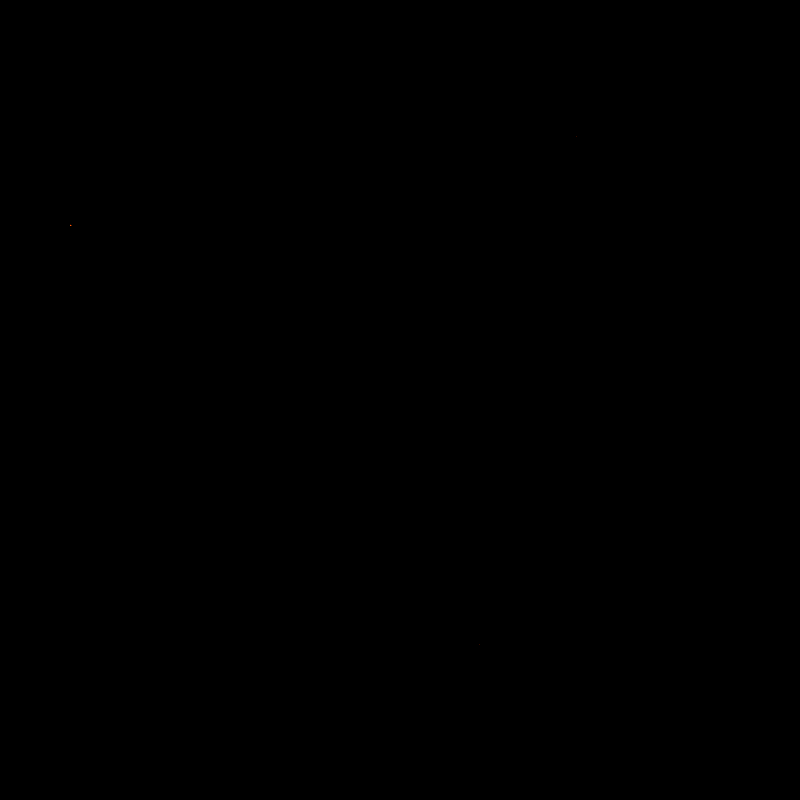 To check at what points that would happen a crude method was applied. The number of individual pixels that were hit was counted. To speed things up the grid was scaled down.

When this value is plotted on a map where $a$ and $b$ are varied and $c$ and $d$ are fixed the following maps are obtained, where $a$ is varied from $-4$ to $4$ on the $x$-axis and $b$ is varied from $-4$ to $4$ on the $y$-axis. Ignore the values of $a$ amd $b$, they are not exact due to rounding errors accumulating. White means high number of pixels hit, black means low number of pixels hit: 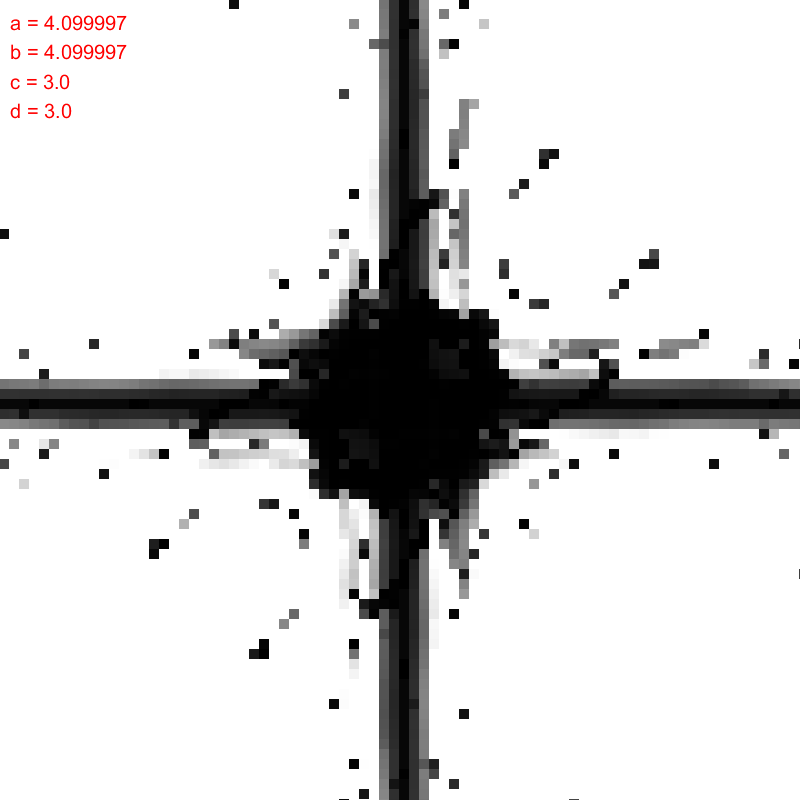 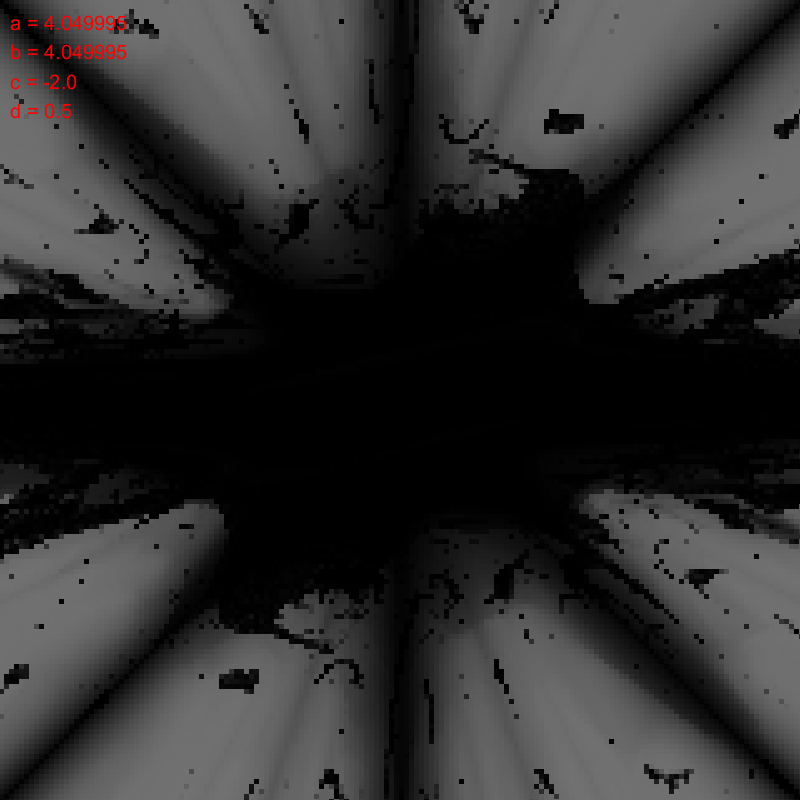 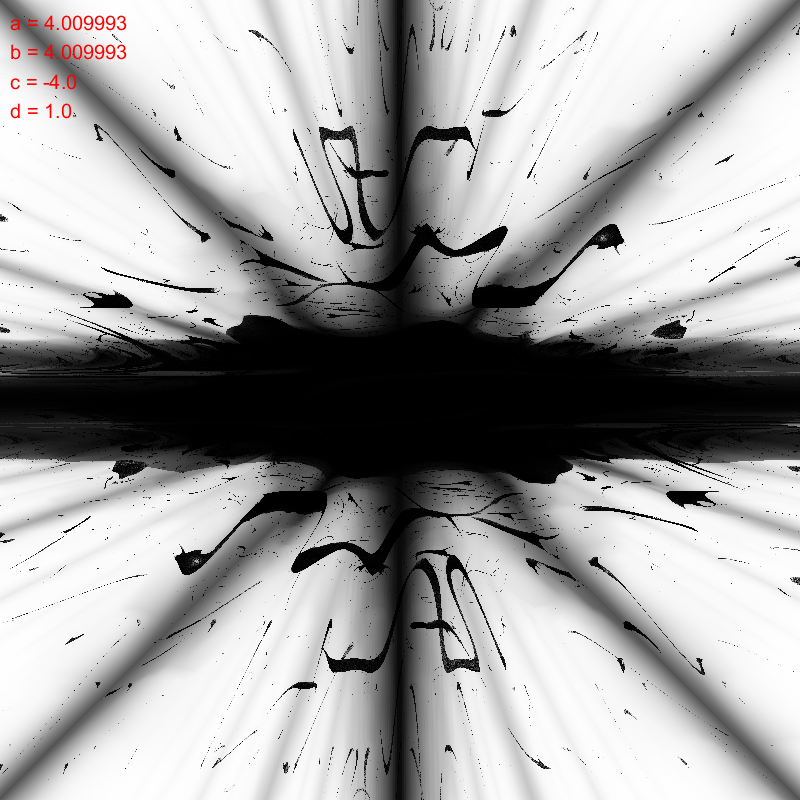 Is there anything known about this map? It looks a bit like a fractal. Due to this shape it seems like there is no simple formula to determine the state of the attractor beforhand. Also it seems to be symmetric.

Obviously this method is very crude in determining the state of the fractal. Also it is slow, the last picture took over 4 hours to render. Is there a better method?

For anyone trying to replicate the pictures of the map, here is the processing code for that:

And for anyone trying to test out various values of $a$, $b$, $c$ and $d$ in the actual attractor itself, here is some basic processing code for a black/white image:

These animations show one variable continuously being varied:

Here is a crude processing port for rendering the attractor: https://pastebin.com/nVCJipkA

Some efforts were made to draw a bifurcation diagram, which is obviusly hard because it is a 2D-attractor.

A crude solution is simply dropping the $x$-coordinate and instead plotting $a$ on the $x$-axis. 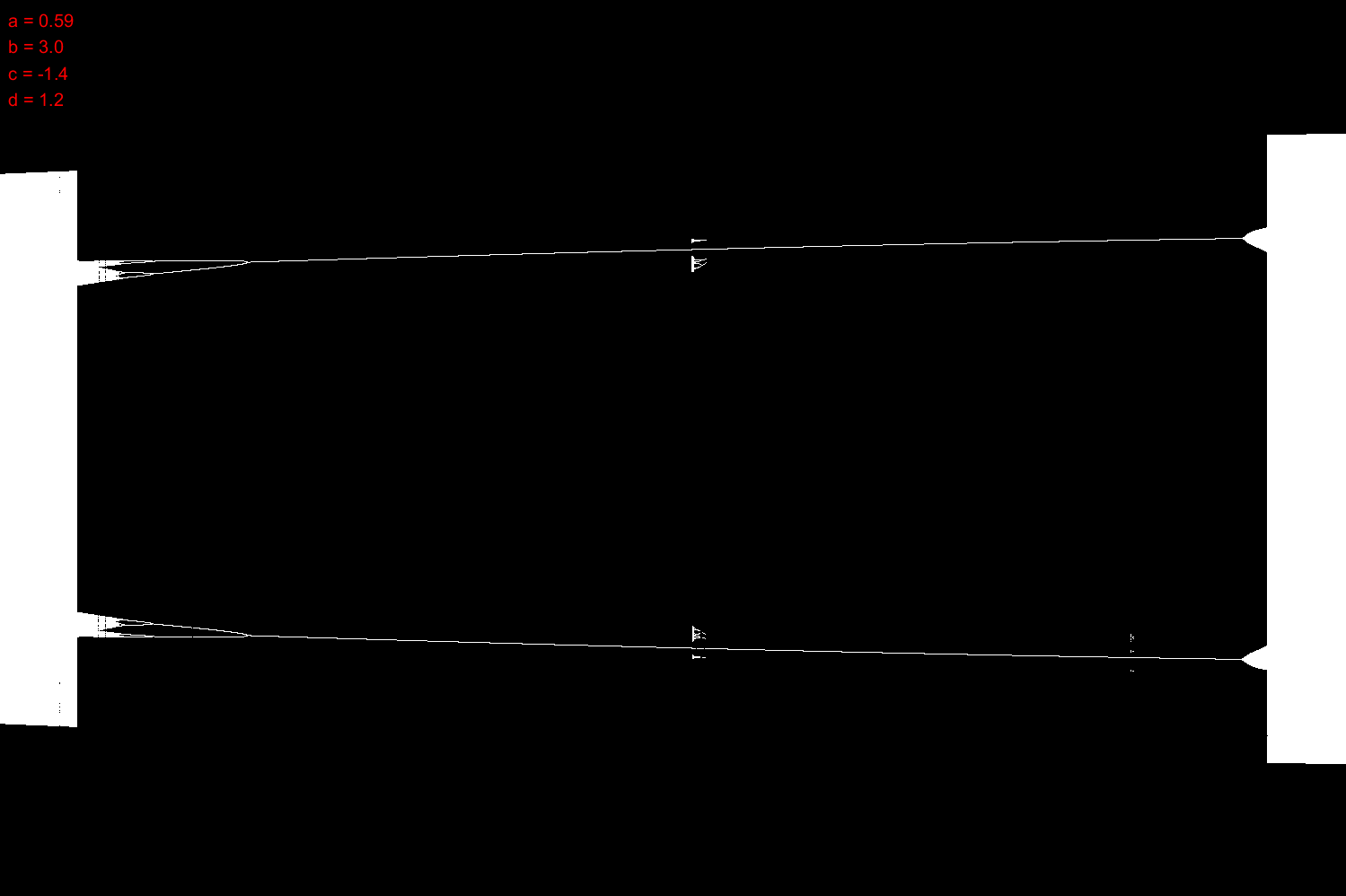 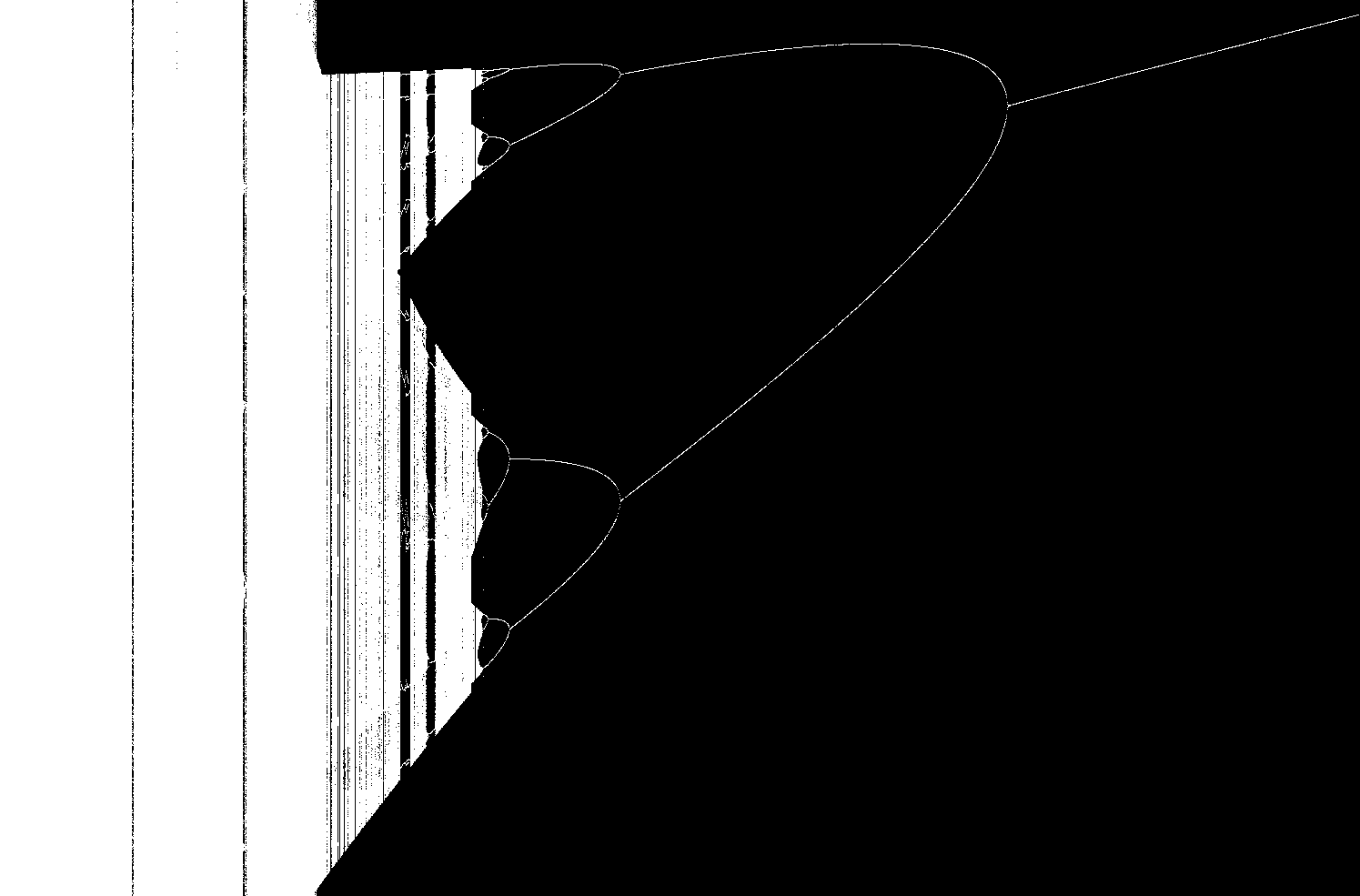 Here is a processing script for drawing bifurcations: https://pastebin.com/9ndL2dH3

And here is an animation of the bifurcation plot: https://youtu.be/tRgM-HhtXVk

Upon viewing a logarithmic plot it's visible that not every point in the dense regions are hit equally often: 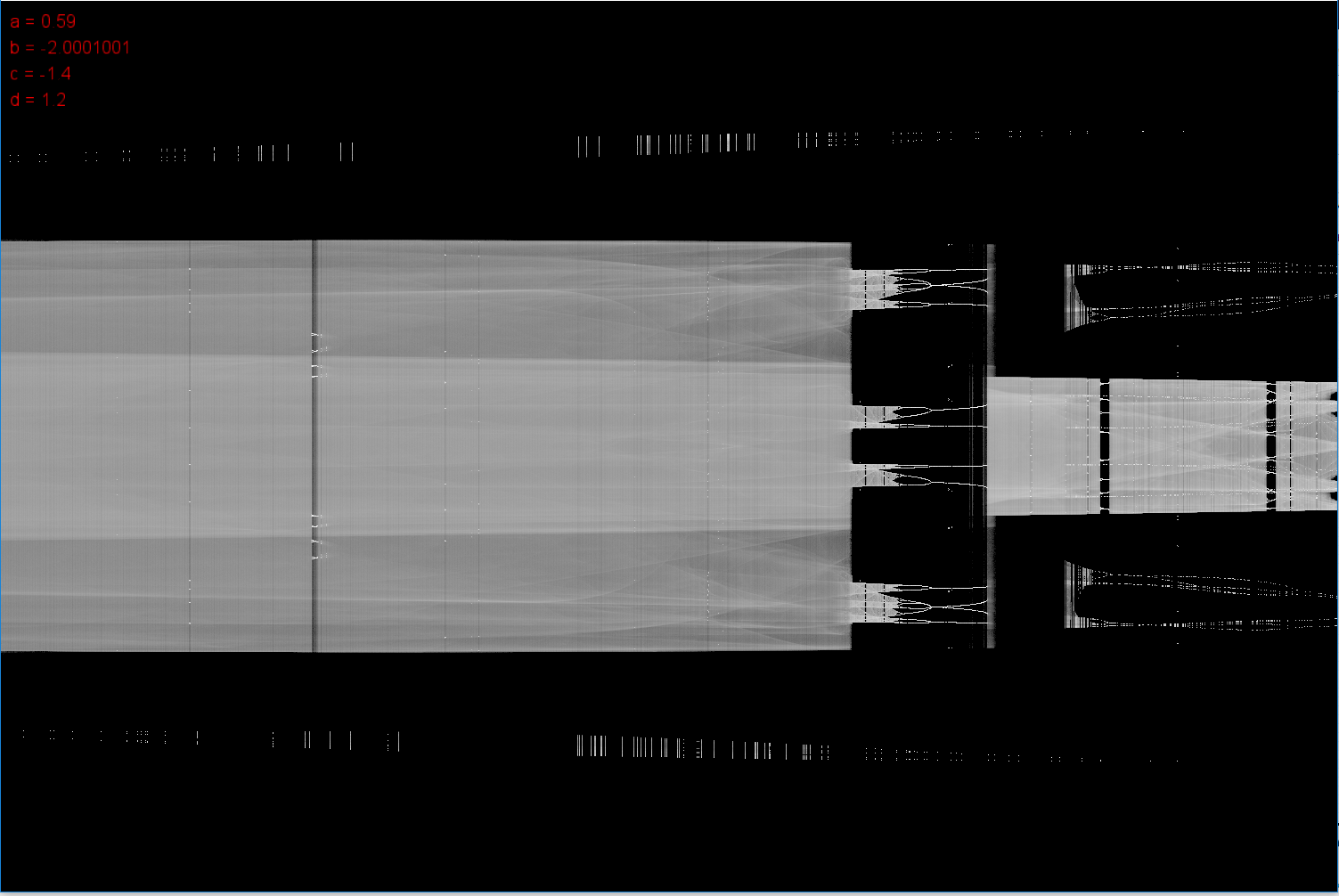 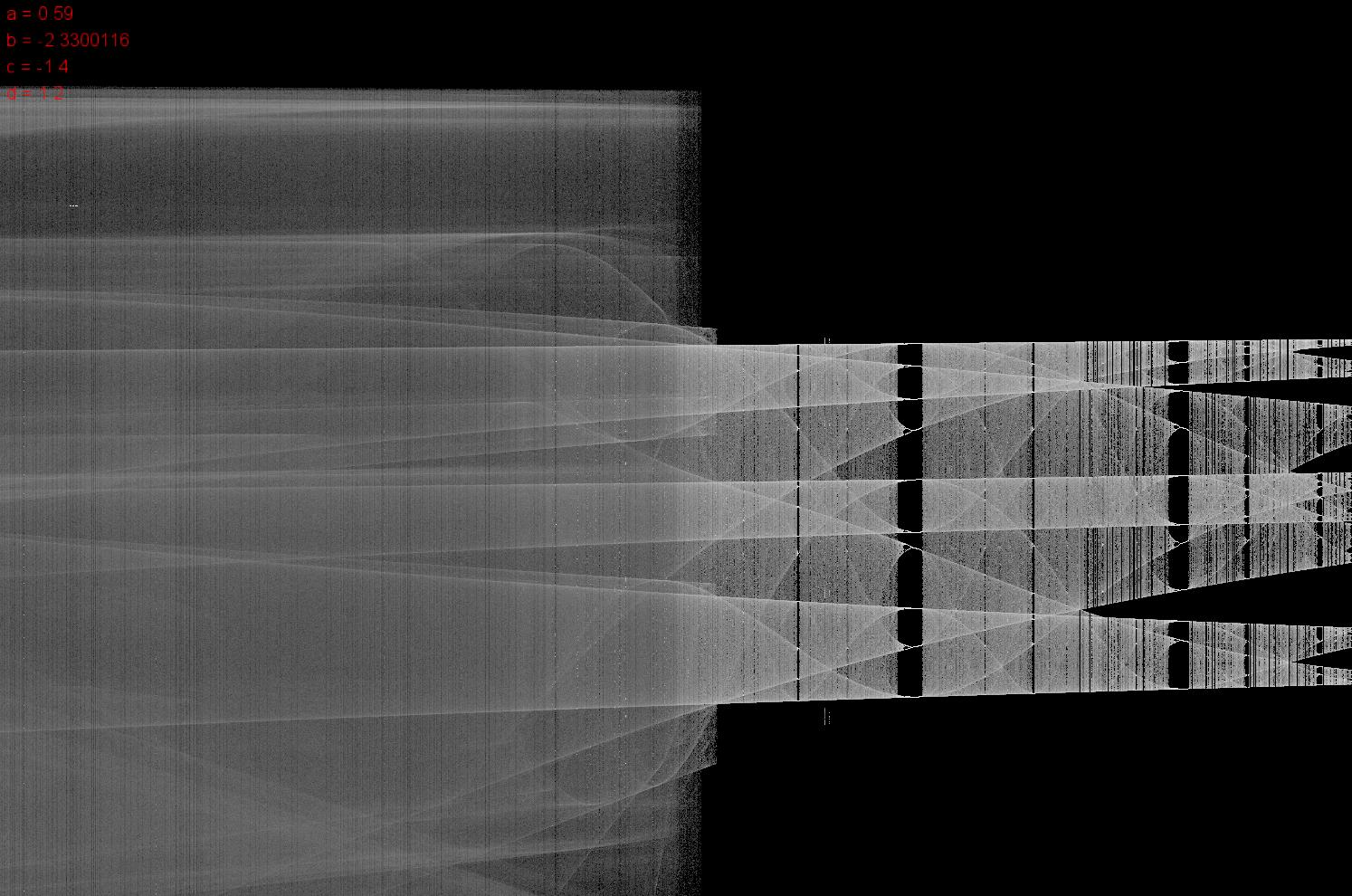 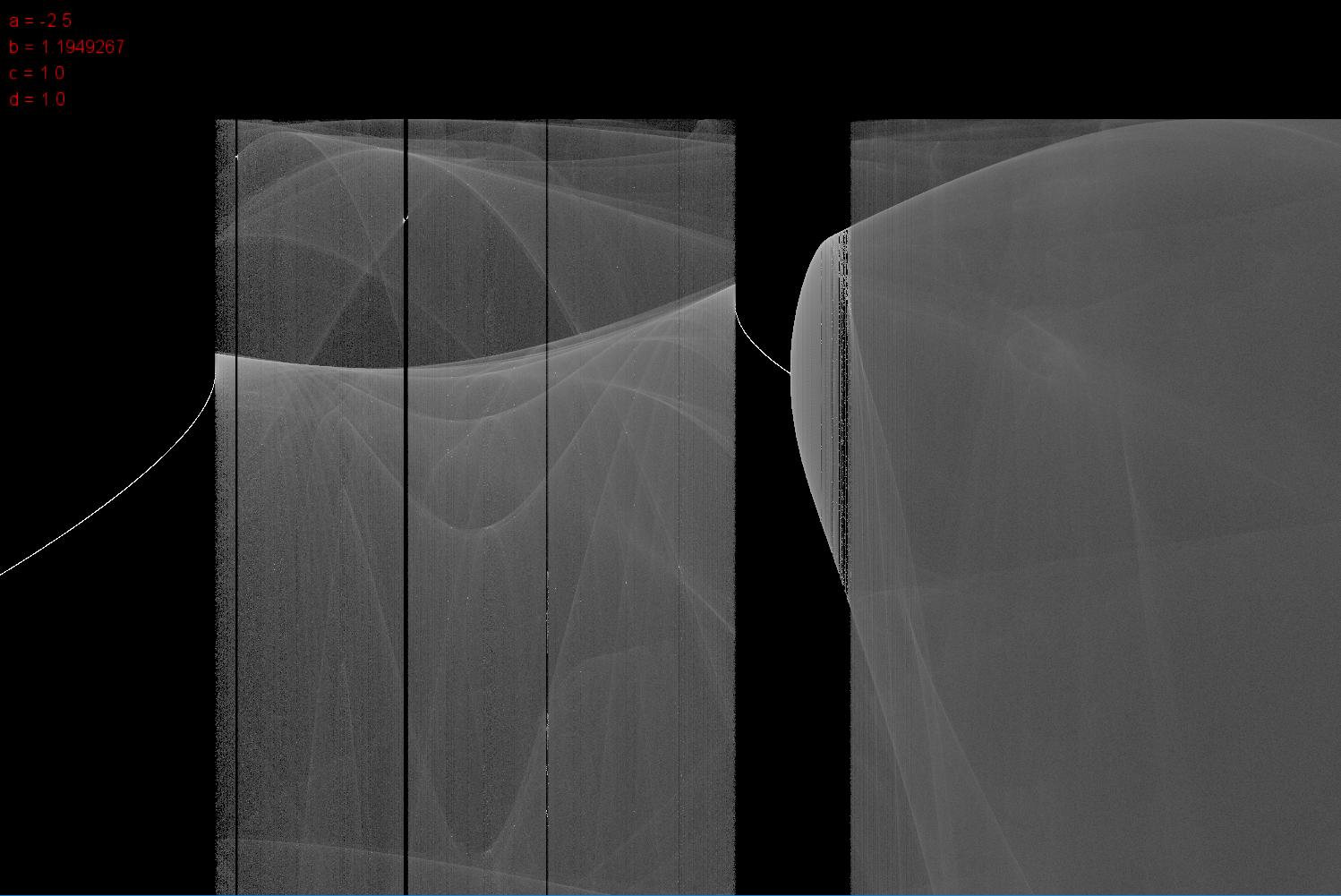 Thanks to Claude I could make some Lyapunov plots. 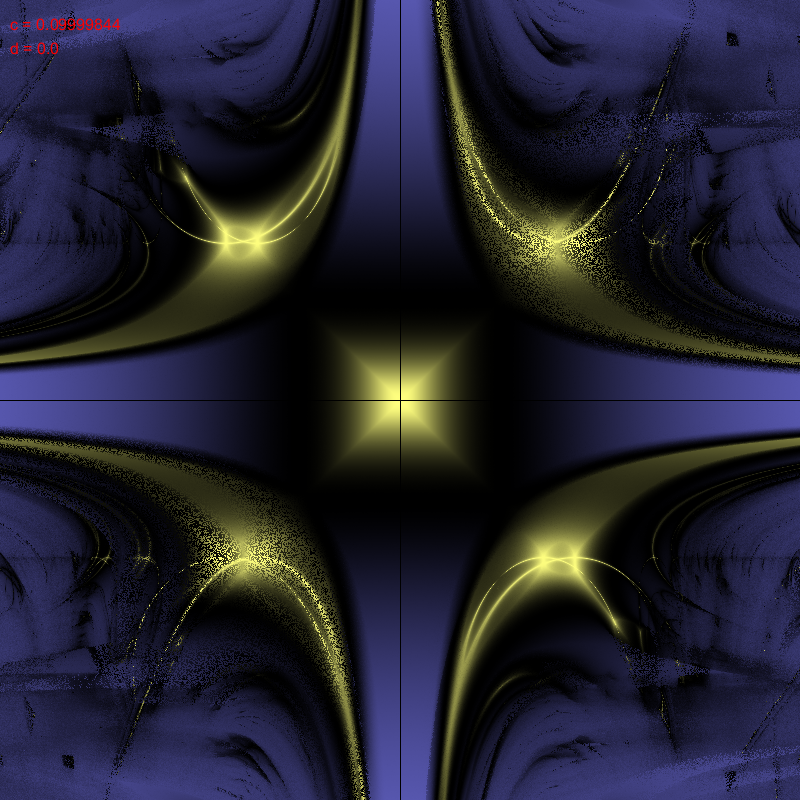 But then I noticed the noise on the left side. At first it seemed just a precision problem, but it was very persistent.

But then, I realised something. 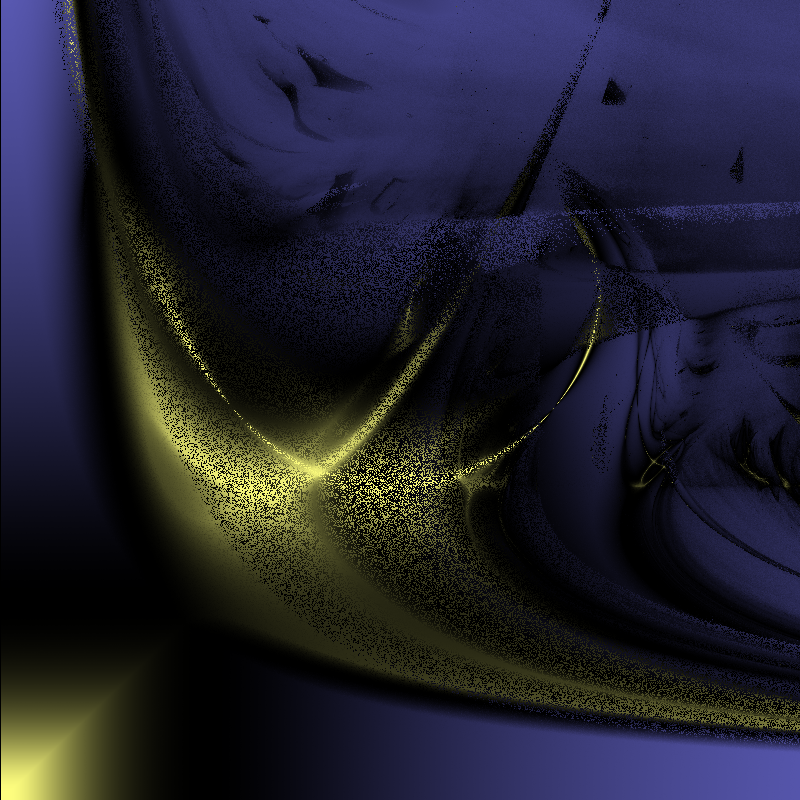 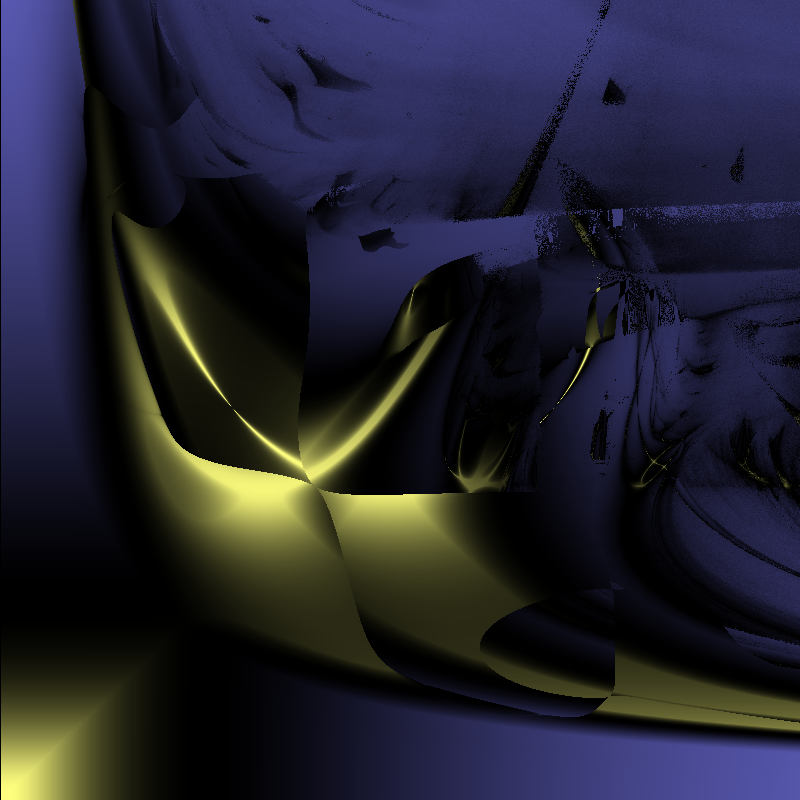 Further investigation shows strange behaviour: There seem to be multiple cycles, and which cycle is reached during the iteration is determined by the starting position. 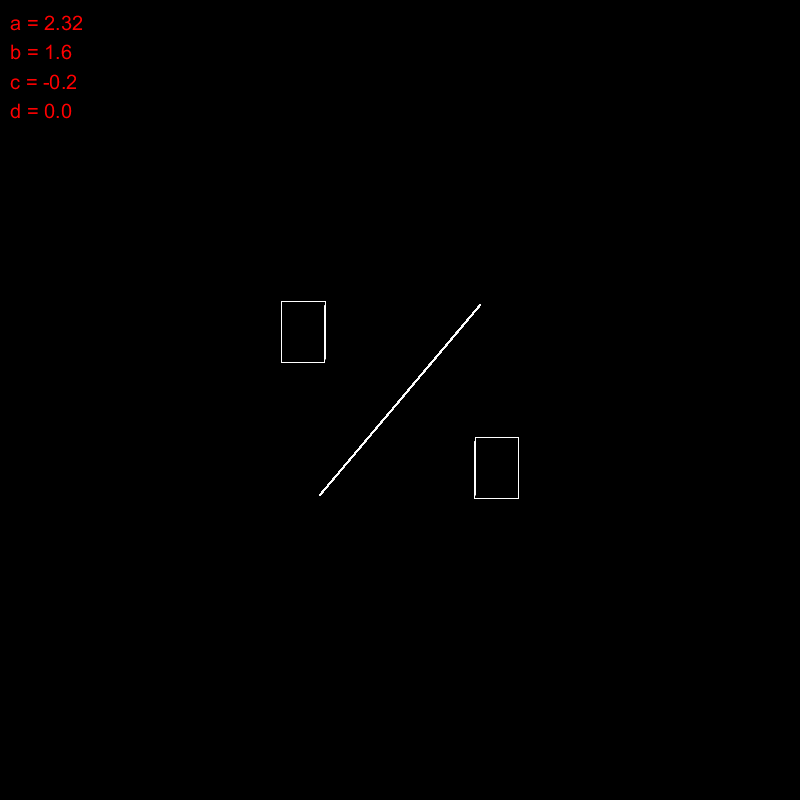 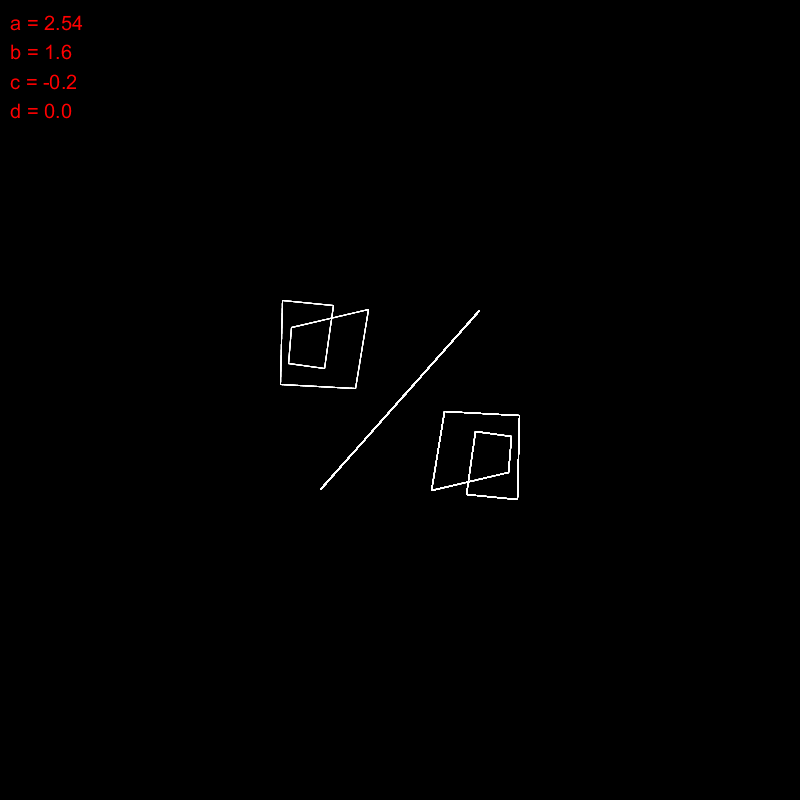 Here is a map that shows where each starting point ends up after the iteration. Be aware that there is a 2-cycle and two 4-cycles, therefore adding a single iteration shifts colors around in the 2- and 4-cycle. As shown before though, being in one of the cycles means being stuck there.

Color-coding of the points: 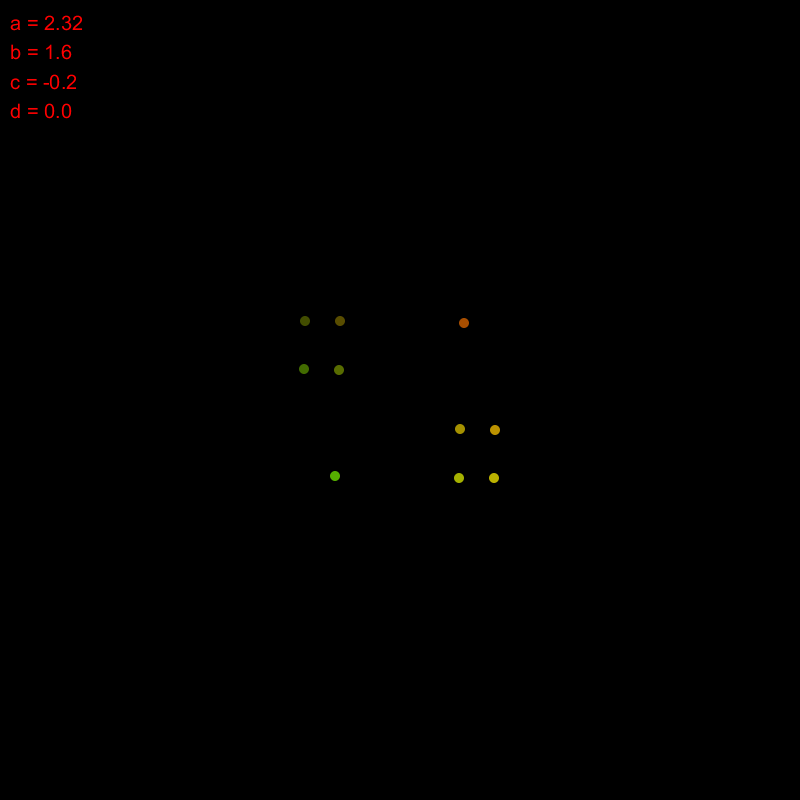 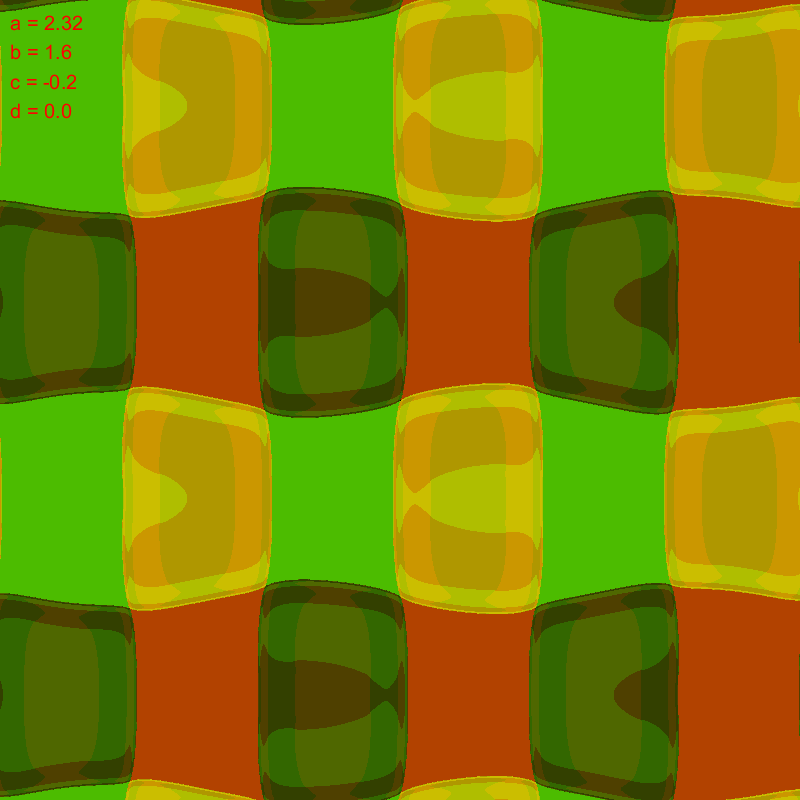 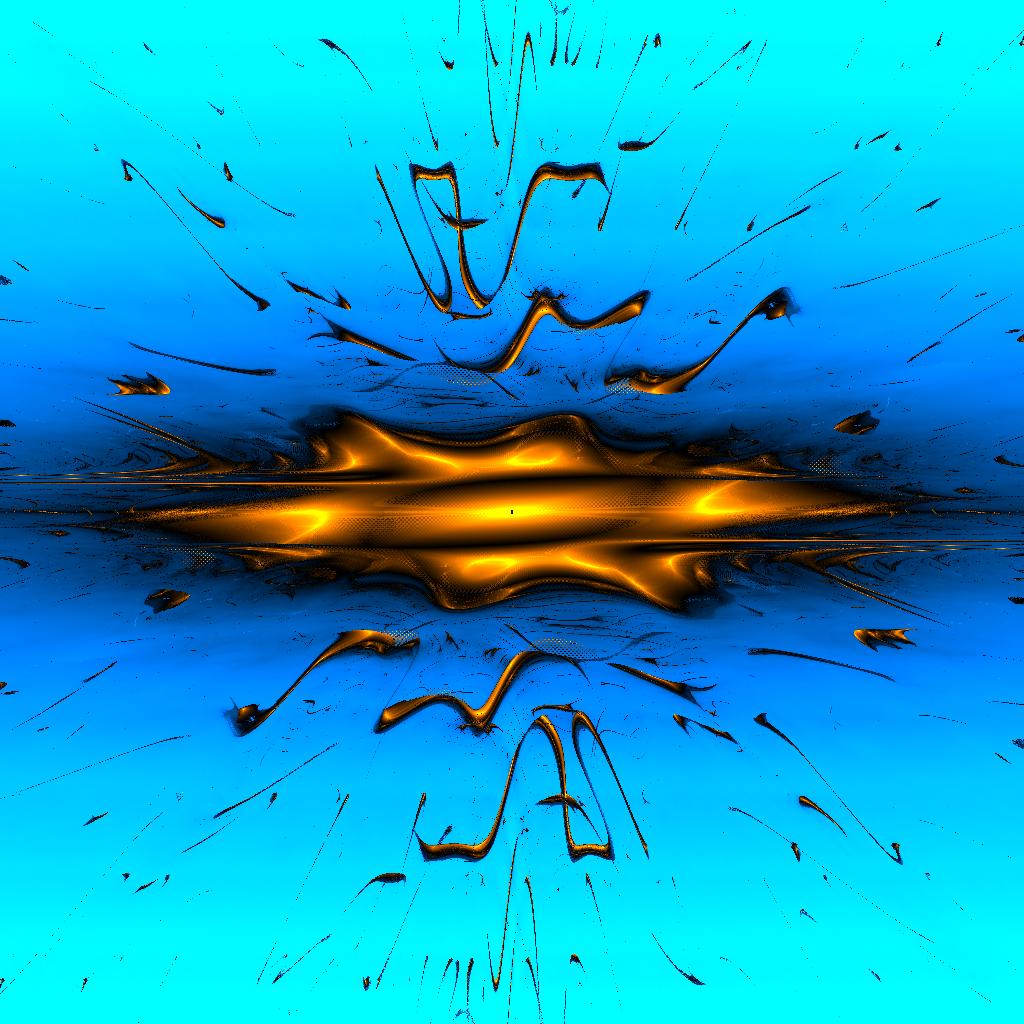 Source code (which is this BASIC code for Henon map converted to C with minor changes):

Not the answer you're looking for? Browse other questions tagged dynamical-systems transformation fractals chaos-theory or ask your own question.