Is every “even” polyomino with one hole tileable by dominoes?

In Conformal Invariance of Domino Tiling the author defines an even polyomino as a polyomino with all corners (of all borders, inside and outside) "black" if the polyomino is colored with the checkerboard coloring. A corner is black if the interior angle lies in a black square, like this:

Here are some examples: 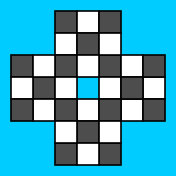 My question is whether it is true that an even polyomino with one hole is always tileable by dominoes.

Background: A related polyomino is called a Temperleyan polyomino (in the same paper), which is formed from an even polyomino by removing one black corner from the outer border, and appending a black cell to each interior border. Here are some examples: 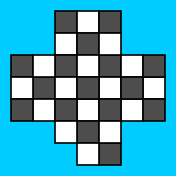 The paper shows (although not really in a way I can follow) Temperleyan polyomino are tileable by dominoes.

The holes of even polyominoes are also even.

It is true! An even polyomino with one hole is tileable by dominoes.

The proof below has a few sketchy elements; a proof without those will be nice.

Proof. For this proof to work, we will manipulate the border (either the outside or inside border) to give a new polyomino with a hole, and we will consider regions where borders overlap also valid polyominoes, and they are even if the corners are black as with the regular definition. Here are some examples of such polyominoes (the outside border has been slightly displaced where it coincides with the inside border).

An example of this manipulation:

An example of this manipulation:

(This part is a bit sketchy; it requires considering many cases.)

Suppose there is such a square. Find the largest connected set of cells that contains this square such that each cell is part of a $2\times 2$ subfigure. This set of cells must have at least four convex corners (as do all rectilinear figures). For these corners to not be corners of the entire figure, each needs to be "covered" by a "strand" (the picture below shows a possibility.) These strands must either result in peaks, or they must connect in pairs. If they connect in pairs, there are two holes, and this is impossible. Therefor, there cannot be any $2\times 2$ subfigure. 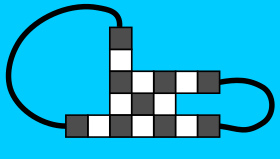 In this^ image, there is a $2 \times 2$ square, contained in a $3\times 3$ square where each corner is covered by a white cell that stars the strand. In this example, the strands connect in pairs, leading to two holes.

Suppose we have an X junction. Each of the four connectors must eventually lead to a peak, or pairs of them must join. In the latter case, we have two holes, which is impossible. Therefor there are no X junctions.

Suppose we have a T-junction. Each of the three connectors must either lead to a peak, or they must join other connectors. We can only join up if we have at least another T junction, in which case we will have at least have two holes, which is impossible. Therefor there are no T junctions.

(This is also sketchy, and require cases to make sure we cannot have other possibilities.)

Not the answer you're looking for? Browse other questions tagged tiling polyomino or ask your own question.

1
Induction proof on covering a checkerboard with dominoes - don't think my proof is right.
6
Does every domino tiling have at least two “exposed” dominoes?
5
Elementary proof of transformations of domino tilings.
3
If we remove a strip polyomino from a strip polyomino, is the result tileable by dominoes?
7
Are all polyominoes with even sides tileable by dominoes?
21
What is the smallest polyomino that can't surround a $1\times 1$ hole?
6
Are the only polyominoes that can tile triangles right trominoes?
7
Can every polyomino of even size be tiled by $L$-trominoes when scaled up by a factor of $3$?