Which time-frequency coefficients does the Wavelet transform compute?

(I asked this on Stack Overflow a while ago and didn't get a satisfying answer, so I'm trying again here.)

Although they are often compared, it seems like the FFT and FWT are apples and oranges. As I understand it, a more appropriate comparison would be the STFT (FFTs of small chunks over time) and the complex Morlet WT, since they're both time-frequency representations based on complex sinusoids (please correct me if I'm wrong). This is often shown with a diagram like this: 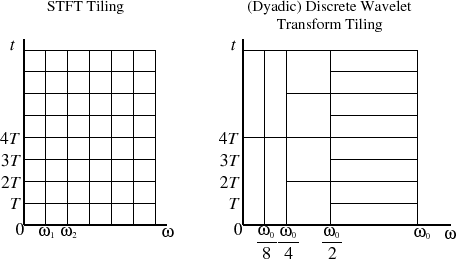 In this example, N for the STFT is the number of vertical columns (ω axis), and a single O(N log N) FFT operation calculates a single row of N coefficients from N samples.

What I don't understand: How many coefficients does a single O(N) FWT operation compute, and where are they located on the time-frequency chart above? Which tiles get filled in by a single computation?

If we calculate an equal-area block of time-frequency coefficients using both, do we get the same amount of data out? Is the FWT still more efficient than the FFT?

It creates two sets of 4 coefficients, so it's the same as the number of samples in the original signal. But what's the relationship between these 8 coefficients and the tiles in the diagram?

fourier-analysis signal-processing wavelets
Share
Improve this question
edited May 23 '17 at 12:39

Maybe it helps to think of $N=2^n$. Then you can analyze your signal into $n$ scales with the wavelet transform. See, e.g., this image with $n=3$: 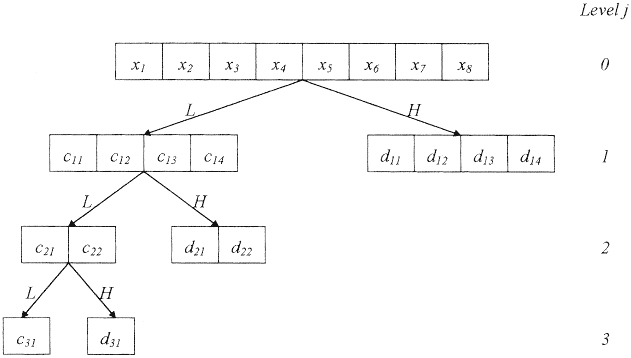 Then the wavelet-transform stores the $c_{31}$ and all the $d_{ij}$'s. If you want to put the coefficients in the time-frequency plane you would have to stretch the tiles as you indicated in your figures. There would be $n$ vertical colums (in $\omega$), the rightmost having $2^{n/2}$ boxes and the number of boxes halving in each column (the last two containing just one box). This adds up to $2^n$.

However, I suggest to read Mallat's "A wavelet tour of signal processing - the sparse way" Chapters 1.3, 4.3 and 8.1. It's quite hard to produce illustrating figures for the wavelet transform here...

Considering the efficiency: To be a bit more precise, the discrete wavelet transform (DWT) of a signal of length $2^n$ and a filter with length $k$ takes $O(k2^n)$, while FFT is $O(n2^n)$ with comparable constants. Hence, DWT is faster it the filter is not too long.

A single O(N) FWT computes as many output samples as there are inputs.

I'm not sure about the exact ordering of the coefficients, but for a Haar-transform of length 8 is calculated in the following 3 steps:

I think the closest you would get to a FFT is to do a wavelet packet analysis with the Shannon wavelets both low and high pass bands iterated. The Shannon wavelet and scaling functions are closely related to the sinc functions which are often derived in first signal and systems courses to be the interpolating functions to be used in perfect reconstruction if no aliasing occured when sampling.

(Also perfect "band-pass boxes" in the Fourier domain are sincs in the time domain. Time shifting the sincs just changes how the boxes rotate in phase, but the frequencies remain in the same box.) 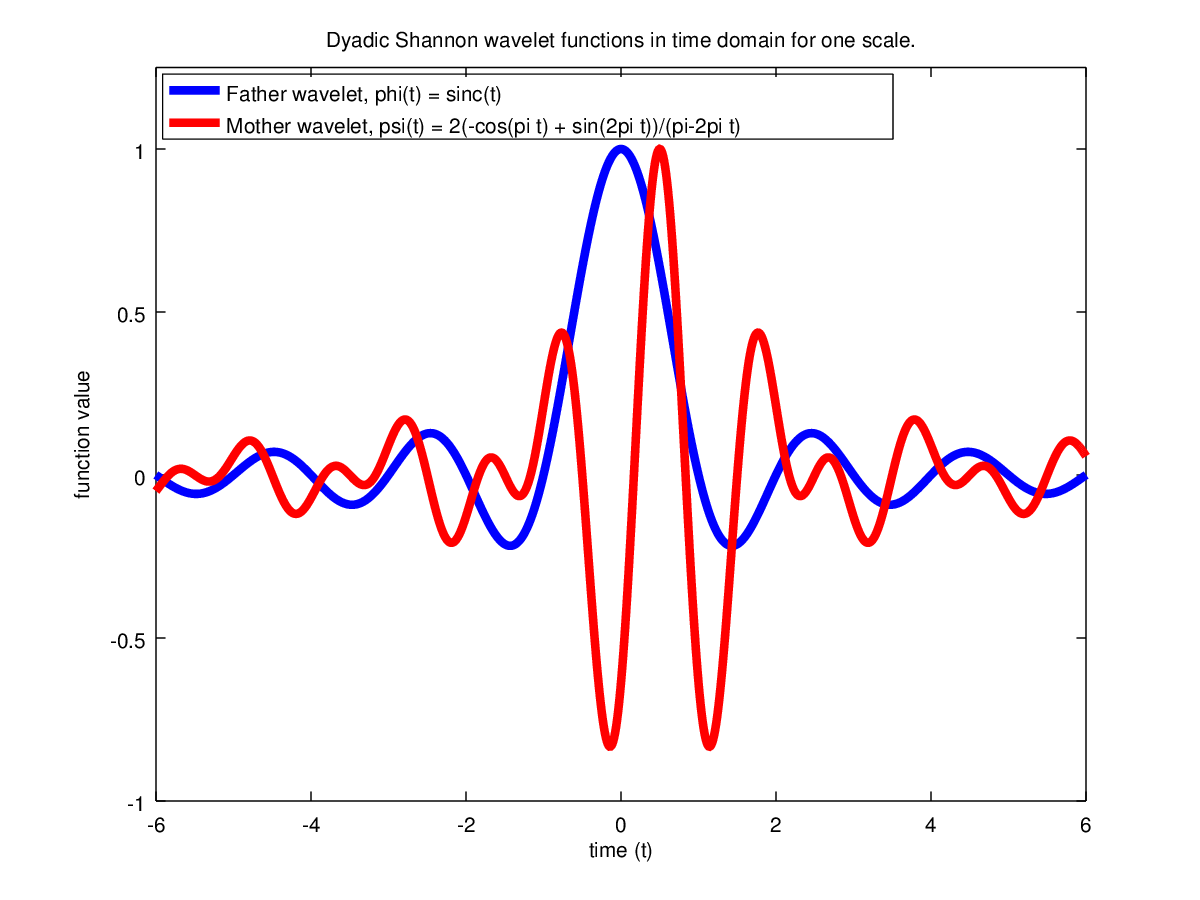 Edit: beware seems to be a bug in the wikipedia formula for mother wavelet function.

Here is a verification of the orthogonality $\phi$ vs $\psi$ for one scale. 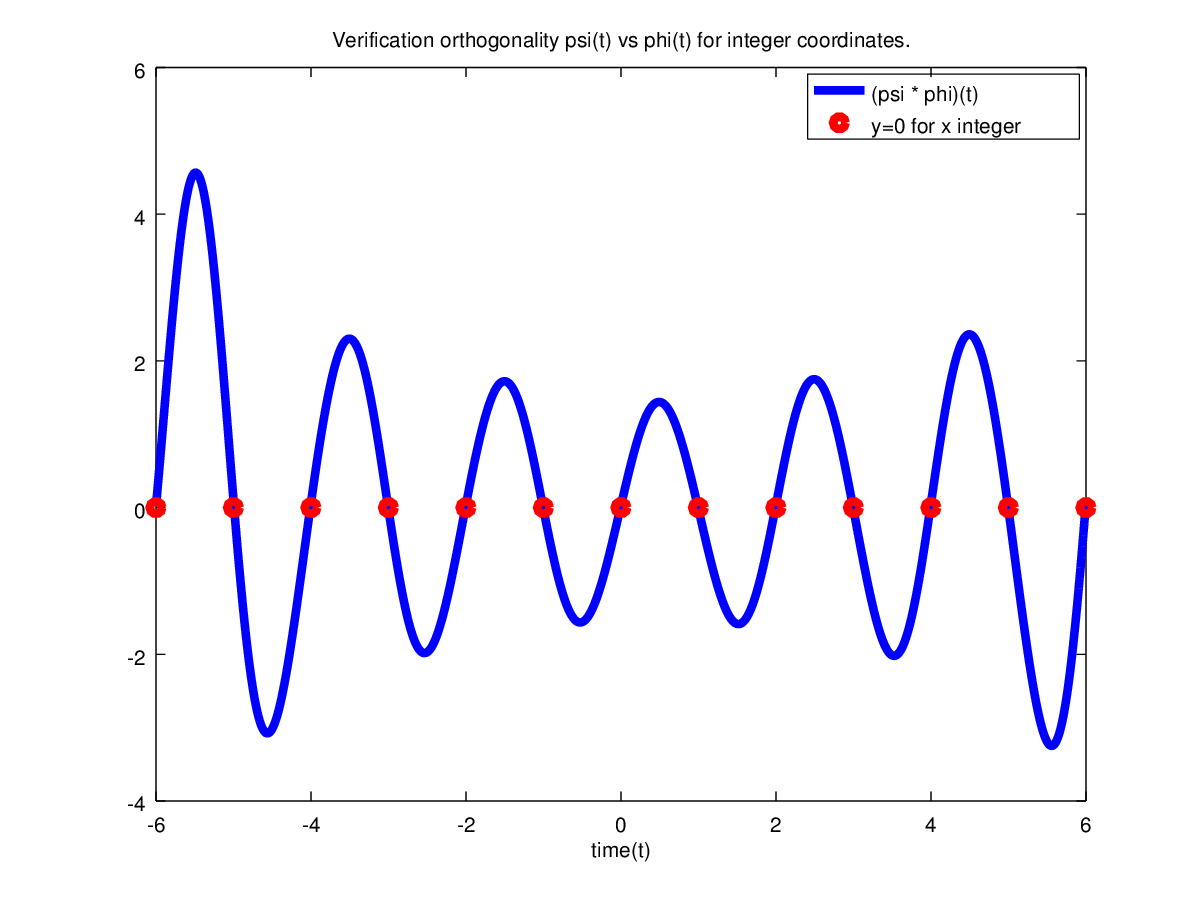 Not the answer you're looking for? Browse other questions tagged fourier-analysis signal-processing wavelets or ask your own question.

3
Best way to find magnitude and phase of a specific frequency in an empirical time series…
5
When does Discrete Fourier analysis fail to detect a frequency?
2
Is it possible to calculate a single frequency bin in $O(\log N)$ time (considering the $N\log N$ performance of FFT algorithms)?
8
Wavelet transform vs Windowed Fourier
1
What information could be extracted from this Discrete Wavelet Transform of a time series data?
0
What does the phase data of a Fourier transform represent?
0
Wavelet Analysis of non-stationary time series