What do $\pi$ and $e$ stand for in the normal distribution formula?

I'm a beginner in mathematics and there is one thing that I've been wondering about recently. The formula for the normal distribution is:

However, what are $e$ and $\pi$ doing there? $\pi$ is about circles and the ratio to its diameter, for example. $e$ is mostly about exponential functions, specifically about the fact that $\frac{\mathrm{d}}{\mathrm{d}x} e^x = e^x$.

It is my firm conviction that proofs and articles are available, but could someone perhaps shed some light on this and please explain in a more 'informal' language what they stand for here?

I'm very curious to know as those numbers have very different meanings as far as I'm concerned.

So I think you want to know "why" $\pi$ and $e$ appear here based on an explanation that goes back to circles and natural logarithms, which are the usual contexts in which one first sees these.

And it turns out that this is true because the square of this integral is $\pi$. Now, why should the square of this integral have anything to do with circles? Because it's the total volume between the graph of $e^{-(x^2+y^2)}$ (as a function $g(x,y)$ of two variables) and the $xy$-plane. And of course $x^2+y^2$ is just the square of the distance of $(x,y)$ from the origin -- so the volume I just mentioned is rotationally symmetric. (If you know about multiple integration, see the Wikipedia article "Gaussian integral", under the heading "brief proof" to see this volume worked out.)

One of the important operations in (continuous) probability is the integral. $e$ shows up there just because it's convenient. If you rearrange it a little you get $$ {1 \over \sqrt{2\pi \sigma^2}} (e^{1 \over 2\sigma^2})^{-(x-\mu)^2},$$ which makes it clear that the $e$ is just a convenient number that makes the initial constant relatively straightforward; using some other number in place of $e$ just rescales $\sigma$ in some way.

Having found $\alpha$, we can find $C$ by computing another integral. There's a trick for doing this that avoids using complex residues. This trick computes the square of $$ \int_{-\infty}^\infty \exp(-x^2/2) \, dx $$ by doing a polar change of variables. The quantity $\pi$ then comes out as the length of the interval of angles - basically the length of the circumference of a unit circle.

There is nothing special about $e$ here - it just affects the horizontal scaling of the function and makes the calculations more convenient.

The interesting part is $\pi$. Every time it shows up you can suspect that somewhere circles are involved (and may that be deeply hidden within the structure). And indeed this is the case here!

To be precise we are talking not about $\pi$ but about $\sqrt{\pi}$ here. So the circles show up when you square the function which means that you go one dimension up. It follows that in order to see the circles we must look at the two dimensional normal curve:

When you look at the contour lines you will see the circles!

This will become even clearer when you have a look at the contour plot!

Sources:
(1) The plots were created with WolframAlpha.
(2) Full details about the derivation can be found in this wonderful (and easy to follow) book: Strange curves, counting rabbits, and other mathematical explorations By Keith M. Ball, p. 100-105.

De Morgan and the Actuary

De Morgan was explaining to an actuary what was the chance that a certain proportion of some group of people would at the end of a given time be alive; and quoted the actuarial formula, involving $\pi$, which, in answer to a question, he explained stood for the ratio of the circumference of a circle to its diameter. His acquaintance, who had so far listened to the explanation with interest, interrupted him and exclaimed, 'My dear friend, that must be a delusion, what can a circle have to do with the number of people alive at a given time?'

Once when lecturing in class he [the Lord Kelvin] used the word 'mathematician' and then interrupting himself asked his class: 'Do you know what a mathematician is?' Stepping to his blackboard he wrote upon it: $$\int_{-\infty}^\infty e^{-x^2}=\sqrt{\pi}$$ Then putting his finger on what he had written, he turned to his class and said, 'a mathematician is one to whom that is as obvious as that twice two makes four is to you.'

$e$ and $\pi$ often show up in mathematics in a variety of areas. At times there's an intuitive and logical explanation, and at other times there aren't.

One interesting thing about the Gaussian, though: its Fourier transform is itself also a Gaussian. Considering the frequency domain is used to describe cyclic/periodic behavior, this says something about the behavior of any system that adheres to a Gaussian distribution and its behavior over time.

The Wikipedia article on the normal distribution says:

This reveals the cyclic components I mentioned, and the term under the radicand uses $\ln(x)$ the inverse of $e^x$.

Looking at a plot of the function for $X$ above (with a few terms removed) shows that the samples almost always have values near zero, with a very small portion of them diverging to $\pm\infty$. This is important because a Gaussian process will exhibit behavior near that of its mean value most of the time, and the argument I'm making supports this statement.

Therefore, my interpretation (and I obviously give it without any proof) is this:

There's technical reasons they show up, as pointed out by others. Probably far more than have been listed. However, I'm a firm believer that math isn't just about being able to give a proof for something, but rather understanding what the math actually describes and then being able to apply the concepts necessary for the proof to come up with the result. 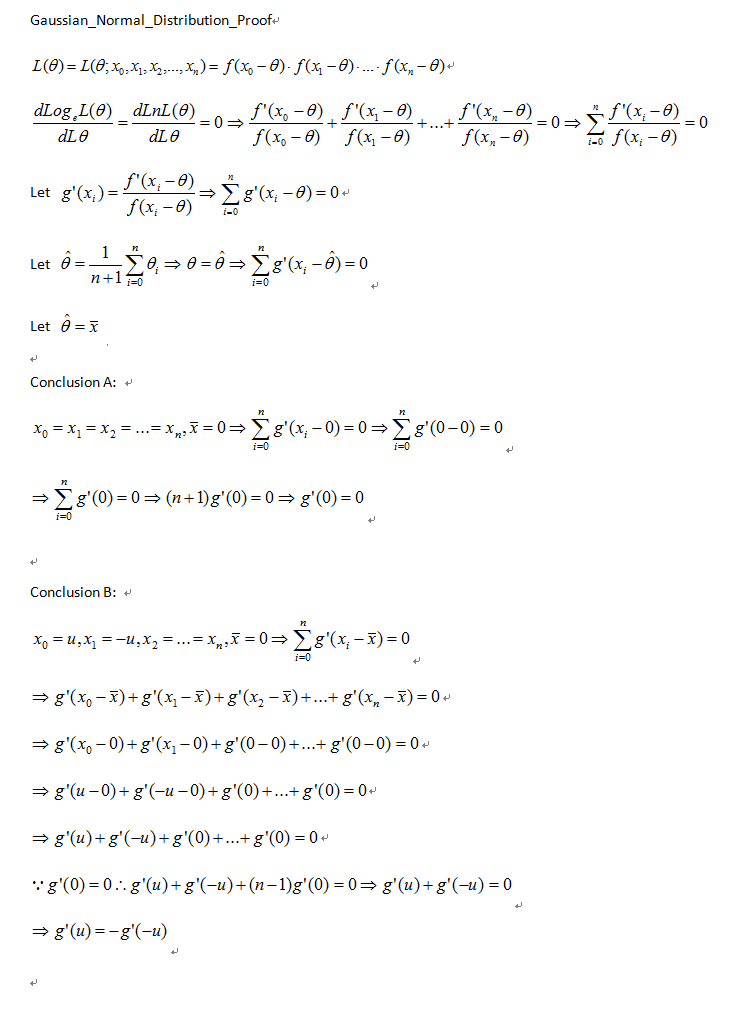 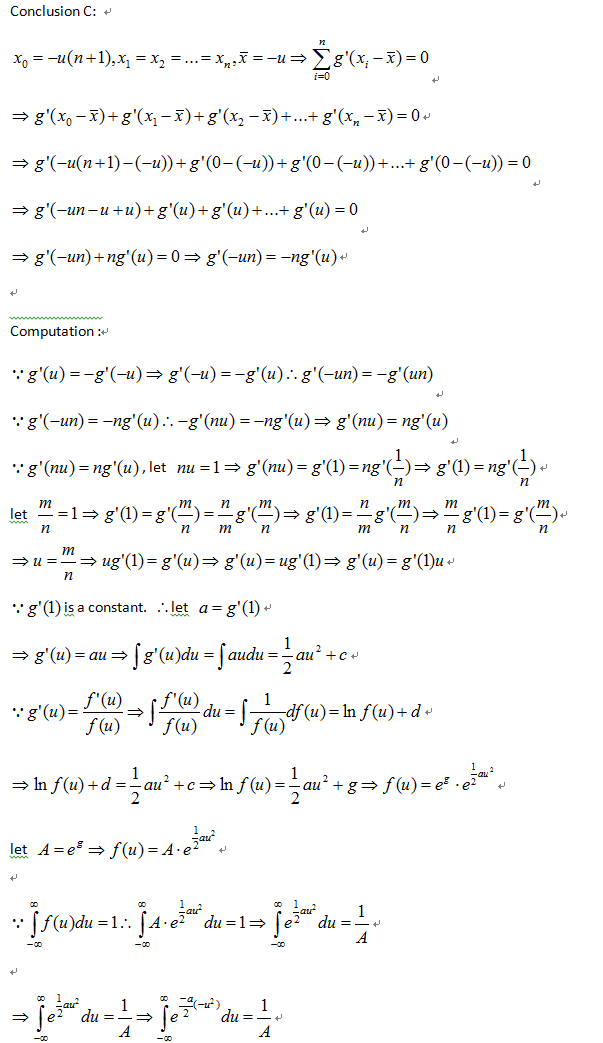 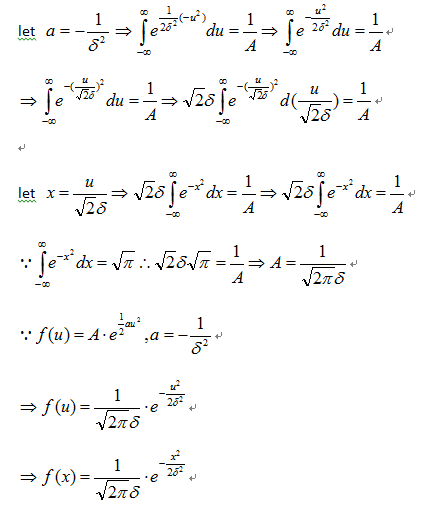 Not the answer you're looking for? Browse other questions tagged probability probability-distributions normal-distribution pi or ask your own question.

203
Proving $\int_{0}^{\infty} \mathrm{e}^{-x^2} dx = \frac{\sqrt \pi}{2}$
43
What are some surprising appearances of $e$?
9
What is the deepest / most interesting known connection between Trigonometry and Statistics?
2
Why does $\pi$ appear in the probability of a number being square-free?
1
Why is a $2\pi$ in the gaussian distribution function?
1
Normal distribution probability density function for dummies
1
Darts and the Gaussian - Placing the bivariate in front of the univariate. Just an integration trick?