Awodey's Category Theory is at it again, asking me to do things without fully explaining what any of it means. Part (b) of Problem 2 in Chapter 5 reads as follows:

So I started by doing the obvious thing and I drew a cube with the goal of eventually applying the two-pullbacks lemma. 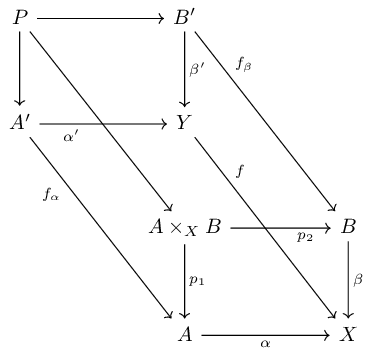 In truth, I am not exactly sure what the question is asking. For example, one lemma given in Awodey states that the pullback of a commutative triangle is a commutative triangle. He then clarifies to say that if I have a triangle $\gamma:A\to B$, $\beta:B\to C$, and $\alpha:A\to C$ with $\alpha=\beta\circ\gamma$ and a map $f:C'\to C$, and if one can form pullbacks $\alpha'$ and $\beta'$ of $\alpha$ and $\beta$ along $f$, then there is a pullback $\gamma'$ of $\gamma$ which satisfies $\alpha'=\beta'\circ\gamma'$. I'm not entirely sure how the first bolded statement translates to the second bolded statement. The only justification I have for it is that it makes the application of the two-pullbacks lemma possible. If someone could justify the precise lemma statement from the ambiguous one and make the problem statement precise in the same way, that would help just as much.

For anyone who cares, I have figured out the answer to the problem. If one labels the map $\alpha\circ p_1=\beta\circ p_2:A\times_X B\to X$ as $h$, then we have two commutative triangles making up the front face of the cube. Take the triangle $A\times_X B\to A\to X$. One forms pullbacks $h'$ and $\alpha'$ of $h$ and $\alpha$ respectively along $f$, and then two-pullbacks gives a map $q_1:P\to A'$ such that $\alpha'\circ q_1=h'$ and such that left side of the cube is a pullback. Do the same for the other triangle on the front face. Then one evidently gets commutativity of the entire cube, and every face save for the back face (the one we care about) is a pullback square. Now, by two-pullbacks, if we show that the rectangle formed by the back and bottom faces is a pullback, then since the bottom face is a pullback, the back face must be as well. But since the diagram commutes, this rectangle is the same as the rectangle formed by the top and front faces. Since these faces are each pullback squares, the rectangle is as well, and two-pullbacks gives that the back face is indeed a pullback.

Awodey's description of a pullback of a commutative triangle is different (and much clearer) than what you've said. For example, it doesn't make sense to talk about the pullback of $\alpha'$ along $f$ since the codomain of $\alpha'$ is not $C$. It would make sense to talk about the pullback along $\beta$ and $\gamma$ inducing a pullback square involving $\alpha$, and this is what Awodey says (though more clearly than this). Albeit, you've switch $\alpha$ and $\gamma$ from his presentation (which is probably part of the confusion).

Nevertheless, there is an easier/better way of thinking about what is going on which is touched at in multiple points later in the book. Awodey mentioned the slice category $\mathcal C/C$ early on as an example of a category. This is the category whose objects are arrows of $\mathcal C$ with codomain $C$. Given two objects of $\mathcal C/C$, i.e. two arrows $k:A\to C$ and $g:B\to C$, an arrow from $k \to g$ is an arrow $f:A\to B$ such that $k=g\circ f$. This is sometimes expressed by saying that the arrows are commutative triangles.

Now for your pullback of a pullback square, you just note that pullbacks (aka fibered products) are products in the slice category. That is, given $k:A\to C$ and $g:B\to C$, the product $k\times g$ in $\mathcal C/C$ is (the diagonal arrow of the) pullback of $k$ and $g$. So your "pullbacks of pullback squares is a pullback" theorem is simply stating that $h^*$ preserves products, i.e. that $h^*(k\times g)\cong h^*(k)\times h^*(g)$ and $h^*(\pi_i)=\pi'_i$. (The terminal object of any slice category is the identity arrow [viewed as an object]. It's straightforward to show $h^*(id_C)\cong id_{C'}$.) In fact, using slightly more advanced category theory, we can finesse the whole problem. $h^*$ (as with any pullback functor) has a left adjoint just via post-composition, so $h^*$, like any right adjoint, preserves all limits including finite products.

Not the answer you're looking for? Browse other questions tagged category-theory pullback or ask your own question.

3
Meaning of 'pullback of a pullback square'
1
Question on a specific pullback.

3
Unnecessary hypothesis for a pullback in Hungerford
1
Square is homotopy Cartesian if horizontal maps are weak equivalences
0
Counterexample of pullback lemma.
2
Why $f'$ is an isomorphism if the rightmost square is a pullback?
1
Why the rightmost square is a pullback?
2
How to prove the sufficient and necessary conditions of pullback square?
6
Do homotopy pullbacks always compose?
3
Other pullback lemma for effective epimorphisms
3
Subobject classifier of $C$ is the same as the terminal object of $D$
0
Pullback induces isomorphism on the fibers