In the paper On the geographical problem of the Four Colors by Kempe, at the end of page 194, it is stated that

It will readily be seen that we can interchange the colours of the districts in one or miore of the red and green regions without doing so in any others, and the map will still be properly coloured. The same remarks apply to the regions composed of districts of any other pair of colour. Now if a region composed of districts of any pair of colours, say red and green as before, be of either of the forms shown in Figures 3 and 4, it will separate the surface into twvo parts, so that we map be quite certain that no yellow or blue districts in one part can belong, to the same yellow and blue region as any yellow or blue district in the other part 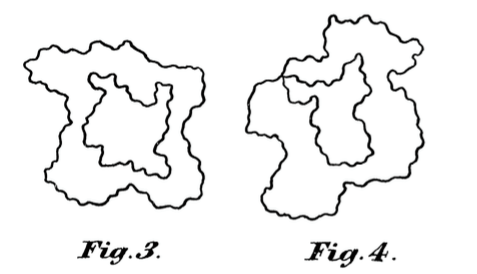 But I'm having trouble understading his argument. I mean as far as I understood, those lines in the figures are the boundaries of regions which contain districs, and if we change the colors of district, say blue and green, in one region only, there will be no problem, but can't a district of blue color in the inner region have a neighbour with green color in the outer region ? 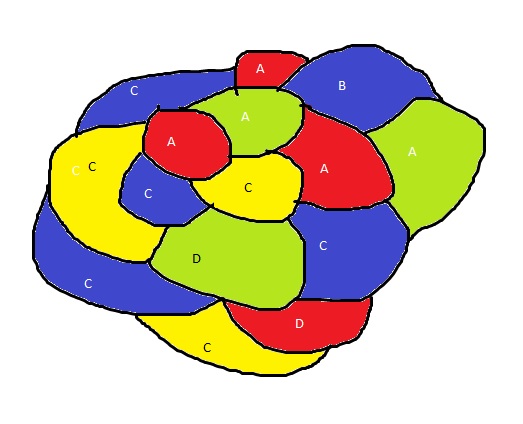 The map has two red/green regions, A and D. It has two blue/yellow regions, B and C. Region B consists of a single blue district. If green and red were switched in region A, the other regions would be unaffected. Every district in A is adjacent to other districts in A or blue/yellow districts in B or C.

The single district in region B can be blue or yellow.

Not the answer you're looking for? Browse other questions tagged surfaces coloring simplex planar-graphs simplicial-complex or ask your own question.

2
How many different cubes can be obtained if four colours are used?
1
Coloring the 6 vertices of a regular hexagon with a limited use per color
2
How to show that the Restricted-3-color decision problem is in the polynomial class
5
What is a "map" in the four color theorem?
2
Explain this proof of the 5-color theorem
9
Coloring problem with limited number of each colors.
2
Number of colourings for which the vertices of a square can be coloured by three different colours such that adjacent vertices get different colours.