We have a circle and there is another circle with smaller radius. They are co-centeric.

Question: What is the true answer? What is wrong with the definition of circumference of a circle and relationship with its taken path.

you get a contradictory result (both wheels have same perimeter). The principle of proof by contradictions tells us that the conjunction of your assumptions is erroneous. Of course, as you pointed out, it makes no sense to reject assumption 3 because one can always go on rolling the wheel until it crosses the right distance.

Therefore, this "paradox" is actually a proof by contradiction that the two wheels cannot simultaneously stay concentric and roll without sliding. If they are to stay concentric all the way, at least one has to slide.

Fix two aligned points (green and red) on the circles. And consider another circle identical to the smaller circle that is attached on top of the bigger circle. Refer to the figure below: 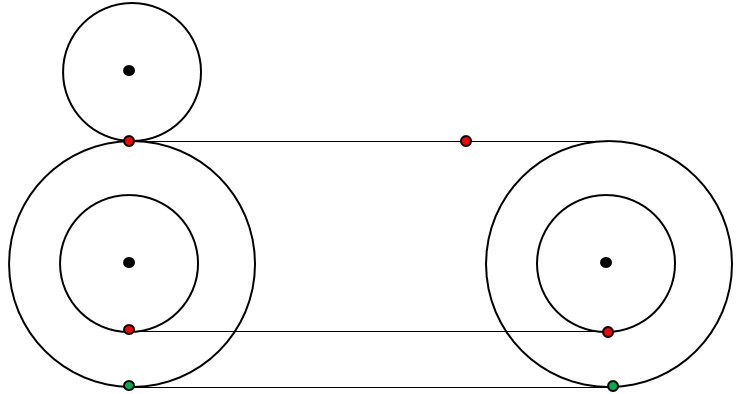 In my view, the crux of the paradox is the concept of slipping (or sliding), which seems straightforward at first glance, but is not.

Galileo seems to have been the first to emphasize the usefulness of considering discrete approximations to the wheel paradox. If we replace the fast-spinning wheel with a fast-spinning $n$-gon for large $n$, then we see that there is no way to set up a one-to-one correspondence. At one moment in time, one of the sides is in full contact with the surface; then the center of the $n$-gon lifts slightly and a vertex drags (slips) on the surface for a while before the next side lands on the surface, overlapping with the part of the surface that was previously in contact with the previous side. Importantly, if we keep the rotational and (horizontal) translational speeds fixed, the total amount of overlap does not go to zero as $n$ goes to infinity. This indicates that using one-to-one correspondence to define slipping is not a good idea; it does not behave well under taking limits of discrete approximations.

As mentioned by others, the "right" way to define slipping is in terms of the velocity of the point of the wheel that is in contact with the surface. We define "no slipping" to mean that this velocity is zero. This definition does behave well when we take limits of discrete approximations. With this definition of slipping, the resolution of the paradox is easy: we are no longer tempted to identify the distance traveled by the center of the wheel with the circumference of the circle just because we can form a one-to-one correspondence between the points on the circumference and the points on the surface; we know that we also have to perform a velocity calculation. We find that the lengths match up if and only if the velocity is zero, and the paradox is resolved.

One final remark: the explanation above applies most directly to the version of the wheel paradox in which the inner wheel is rolling without slipping and the outer wheel is slipping. If the outer wheel is rolling without slipping and we are puzzled about the inner wheel, then the technique of considering a discrete approximation shows us that the inner $n$-gon is "skipping" points on the surface, and again, the total length of the skipped points does not go to zero as $n$ goes to infinity. There is a beautiful Up and Atom video that demonstrates this point clearly.

Its really quite simple and doesnt even need math to show..

Take any given point on the outside larger circle as it moves along..an do the same for the smaller one...neither one travels in a straight line from point A to point B....and they dont travel the same distance. Its seems like they do but they dont..Thats they key..

. For proof..stick a pencil in the outermost part of the larger circle and one in the smaller one..rotate the circle and notice the paths traced out..

They will not be straight lines but curved lines..and the curved line not the same length for both..Bigger the circle, the longer the path traced out from A to B.

Not the answer you're looking for? Browse other questions tagged geometry paradoxes equivariant-maps or ask your own question.

0
Simple geometric reasoning problem
8
Circle rotating within a circle (roulette)
1
Placing a small circle within a large one, trying to maximize the circumference converage
0
Are these triangles congruent?
2
Can this shape contain a circle?
1
Different intuition for area of circle
0
inscribed circles inside circle