A conjecture related to Viviani's theorem 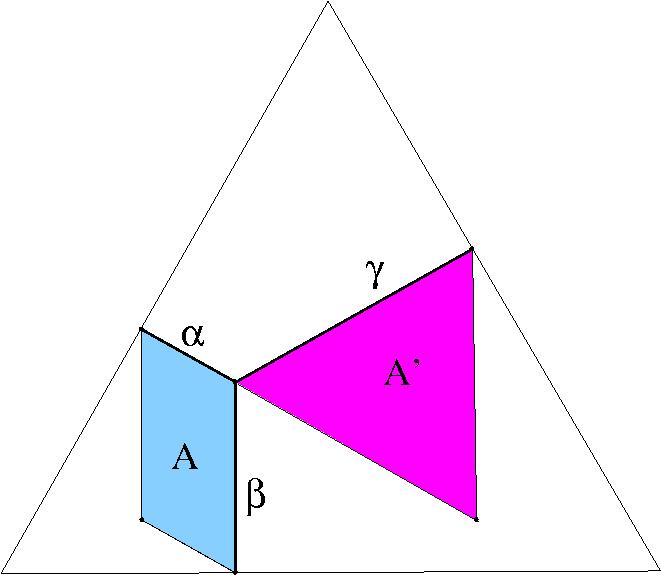 If you intend those properties to hold for any $P$ inside the triangle, then they are certainly false. To check, take for instance $P$ on the left side: then $\alpha=0$ and $\gamma>0$, whereas $\alpha>0$ and $\gamma=0$ if $P$ is on the right side.

Asking for $\alpha$, $\beta$, $\gamma$ to be positive doesn't change the situation: you can place $P$ so that $\gamma$ is almost vanishing while $\alpha$ and $\beta$ are not (diagram below, left), or vice versa (diagram below, right).

If you are asking, instead, for the locus of points such that $\gamma^2≷2\alpha\beta$, then it is not difficult to find that $\gamma^2=2\alpha\beta$ along an arc of ellipse, passing through two vertices of the triangle and tangent there to two sides.

To prove that, it is convenient to use an oblique system of coordinates with $x$ axis along side $AB$ of the triangle and $y$ axis along side $AC$ (see diagram below). For simplicity I also set $AB=AC=1$. Coordinates $(x,y)$ of point $P$ have a simple relation with $\alpha$ and $\beta$: $$ \alpha={\sqrt3\over2}y,\quad \beta={\sqrt3\over2}x \quad\text{and}\quad \gamma={\sqrt3\over2}-\alpha-\beta\quad \text{by Viviani's theorem.} $$ Plugging these into $\gamma^2=2\alpha\beta$ gives a simple equation for $P$: $$ (x-1)^2+(y-1)^2=1. $$ In orthogonal coordinates that would be the equation of a circle with center $O=(1,1)$ and unit radius. In oblique coordinates that is instead the equation of an ellipse, whose properties can be deduced from the equation:

Once you know the length of the axes of the ellipse and their direction, the ellipse is completely defined. 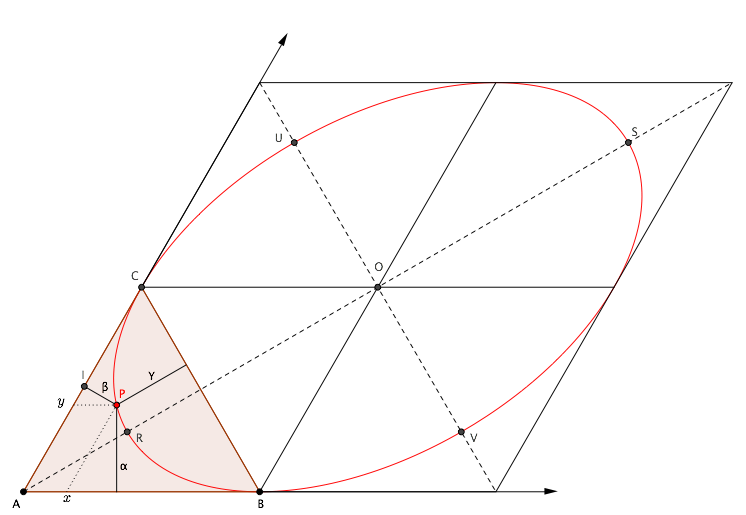 0
Thales' theorem and point in circle
10
Eritrea's Theorem
5
Prove that if the altitude and median of a triangle form equal angles with sides then the triangle is right.
0
Viviani's theorem and ellipse
5
Did I apply the Ceva's theorem correctly to this problem?
5
In the triangle $\triangle ABC$, $|AB|^3 = |AC|^3 + |BC|^3$. Prove that $\angle ACB > 60^\circ$.
0
Solving a similar problem to Viviani's Theorem
5
Prove: Viviani’s theorem
2
Does Viviani's theorem hold on higher dimensions?