This maybe a silly question, but I have never seen anyone rigorously define how to draw a vector field. In contrast, I have a pretty clear understanding how to draw the graph of a function.

The graph is then visualized by drawing each point of the set in a $n+m$-dimensional coordinate frame.

Now let $f: \Bbb R^n \to \Bbb R^n$. Then one can visualize $f$ using a vector field. This is a $n$-dimension coordinate frame in which an arrow is attached to each point which indicates where this point is mapped to under $f$. But what is this "indication" concretely?

Certainly one can simply draw the arrow from its point in the input space to the point in the output space. Also one can think of shrinking those vectors by some constant to improve visibility. This is all good until I consider $f(x,y)=(x,y)$. The vector field of this would be empty, since every point gets mapped to itself and so there would be no arrows. Yet the vector field is not empty, so the arrows seem to be used differently here.

Can somebody rigorously define for me which methods there are and when they are used?

We need to distinguish between $\mathbb{R}^n$, the vector space, and $\mathbb{R}^n$, the manifold. Obviously, they are related, but we're going to be doing different things with each one, so it is good to set them apart. Let $V$ be the former and $X$ the latter.

If $f:X\rightarrow V$ is a function, then you can view it's vector field as the set of vectors:

Usually the arrows are drawn such the origin is the point $(x,y)$ and the tip is at $(x,y) + \alpha f(x, y)$ for some scale number $\alpha$. Your example would look like this 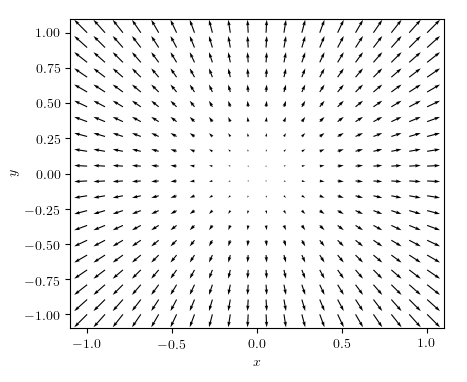 Not the answer you're looking for? Browse other questions tagged functions vectors graphing-functions or ask your own question.

4
compute the bisecting normal hyperplane between two $n$-dimensional points.
2
Derive the equation of first variation for a flow of a vector field.
2
Notation regarding integral curves and vector fields
7
Jacobian matrix vs. Transformation matrix
0
How does one graph the “unit tangential vector field” given by the function F = <-y, x>/r?
2
Simplistic question about position vectors
0
Minimum distance of intersection between two spheres along a specified vector