I have a complicated problem and it involves an understanding of Maths I'm not confident with.

Some slight context may help. I'm building a 3D train simulator for children and it will run in the browser using WebGL. I'm trying to create a network of points to place the track assets (see image) and provide reference for the train to move along.

To help explain my problem I have created a visual representation as I am a designer who can script and not really a programmer or a mathematician: 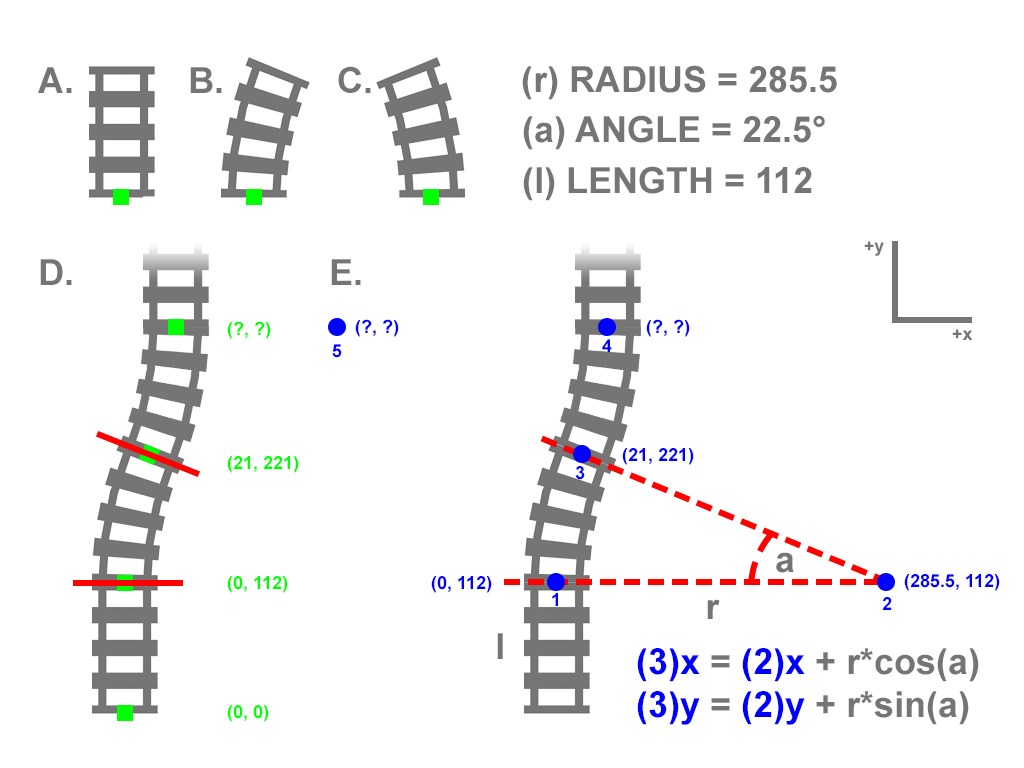 Each shape (A, B & C) has a registration point (start point) illustrated by the centre of the green boxes attached to each of them.

What I am trying to do is create a network of "track" starting at 0, 0 (using standard Cartesian coordinates).

My problem is where to place the next element after a curve. If it were straight track then there is no problem as I can use the length as a constant offset along the y axis but that would be boring so I need to add curves.

Fig. D. demonstrates an example of a possible track layout but please understand that I am not looking for a static answer (based on where everything is positioned in the image), I need a formula that can be applied no matter how I configure the track.

Using Fig. D. I tried to work out where to place the second curved element after the first one. I used the formula for plotting a point of the circumference of a circle given its centre coordinates and radius (Fig. E.).

I had point 1 as that was simply a case of setting the length (y position) of the straight line. I could easily work out the centre of the circle because that's just the offset y position, the offset of the radius (r) (x position) and the angle (a) which is always 22.5° (which, incidentally, was converted to Radians as per formula requirements).

After passing the values through the formula I didn't get the correct result because the formula assumed I was working anti-clockwise starting at 3 o'clock so I had to deduct 180 from (a) and convert that to Radians to get the expected result.

That did work and if I wanted to create a 180° track curve I could use the same centre point and simply deducted 22.5° from the angle each time. Great. But I want a more dynamic track layout like in Figs. D & E.

So, how would I go about working point 5 in Fig. E. because that represents the centre point for that curve segment? I simply have no idea.

Also, as a bonus question, is this the correct way to be doing this or am I over-complicating things?

This problem is the only issue stopping me from building my game and, as you can appreciate, it is a bit of a biggie so I thank anyone for their contribution in advance.

Turns out I was over complicating matters and should have been using simpler trigonometric functions.

Not the answer you're looking for? Browse other questions tagged circles or ask your own question.