Let us consider the two trefoils with Gauss codes $(1U+,2O+,3U+,1O+,2U+,3O+)$ and $(1O-,2U-,3O-,1U-,2O-,3U-)$ respectively ( $O/U$ - over/under, $-/+$ - negative/positive crossing type). These knots are not isotopic. They are, however, the mirror image of each other. Is it true, that if we neglect the information about the crossing types (positive/negative) in Gauss codes, they will determine knots up to mirror images? What would be the effect of such negletion on knot invariants (such as Jones Polynomial, Khovanov homology, etc. )?

Remark. We consider also these Gauss codes which define proper virtual knots, i.e. the knot diagrams of these knots cannot have only classical crossings.

If you neglect the $+/-$, then the virtual knot is well-defined up to an operation Kauffman calls virtualization, which is "flanking by virtuals" then flipping the crossing: 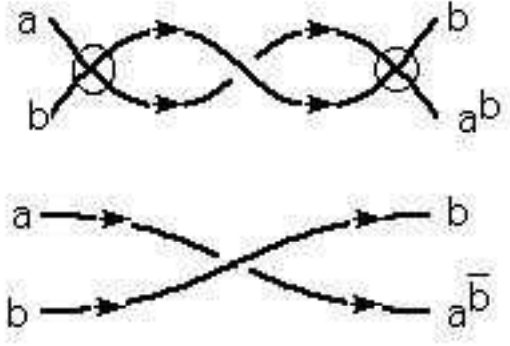 That paper shows how the Kauffman bracket is invariant under flanking by virtuals. If the Jones polynomial were well defined for Gauss codes without $+/-$, then it'd have to be well-defined up to flipping crossings, and yet it is sensitive to flipping crossings. For example, the trefoil knot and the unknot have different Jones polynomials, yet they are related by a single crossing flip.

For classical knots, you can virtualize all the crossings in a connect summand to mirror it. In general, $K_1\mathbin{\#}K_2$ is not equivalent to $K_1\mathbin{\#}mK_2$. While a prime unoriented knot can be recovered up to mirror image from its unsigned Gauss code (mentioned in Lickorish, An introduction to knot theory), that doesn't imply that there aren't pairs of distinct classical knots that are related by virtualization moves.

Not the answer you're looking for? Browse other questions tagged knot-theory knot-invariants or ask your own question.

2
genus of knot and crossing number invariants
5
Recovering knot crossing orientations from a Gauss code or Dowker notation
1
Is there a name for the family of knots beginning with $6_3$, $8_7$, and $10_5$?
0
Virtual diagrams from oriented Gauss codes
1
Fixed points of strong inversion of a knot
1
Representing knots with graph theory