I was trying to understand the definition of countable set (again!!!). Wikipedia has a very great explanation:

But then wikipedia confuses by stating following points:

Theorem: Let $S$ be a set. The following statements are equivalent:

Q1. I feel 2nd statement is wrong, as it allows some element in $S$ to not to map to any element in $\mathbb N$. That is $\mathbb N \xrightarrow{surjection} S$ does not imply $S\xrightarrow{injection}\mathbb N$. Hence $S$ is not countable. Right?
Q2. 3rd statement defines countably infinite set, so its countable also. Right?
Q3. Also I dont get if the extra restrictions of emptyness and finiteness in statements 2 and 3 are required.

I dont know if its correct to add this edit. But its the source of my confusion. So adding it anyway. All answers on this post go on explaining how sujectivity and injectivity imply each other and hence bijectivity. But does that means, whenever injective $f:X\rightarrow Y$ exists, there also holds surjective $g:Y\rightarrow X$ (and also a bijective)? I dont feel so, as the wikipedia gives examples of injective $f:X\rightarrow Y$, for which $g:Y\rightarrow X$ is not surjective: 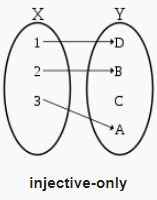 On the same page, it gives example of surjective $g:Y\rightarrow X$, for which $f:X\rightarrow Y$ is not injective: 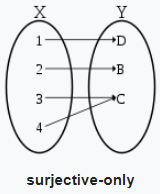 How can I reconcile these facts with given answers? I must be missing something very basic!!!

Doubts about the truth of a statement should all go overboard in the light of a proof. A proof for the equivalence between three statements is typically done by showing (1)$\implies$(2)$\implies$(3)$\implies$(1).

There is nothing wrong with the theorem, and the three statements are indeed equivalent. My suggestion: Read the proof of that theorem carefully and you will understand. In fact,

One more thing, you can search for Schröder-Bernstein theorem. Actually, here you are https://en.wikipedia.org/wiki/Schröder–Bernstein_theorem