Open Nodes More Than Twice during A* Search? 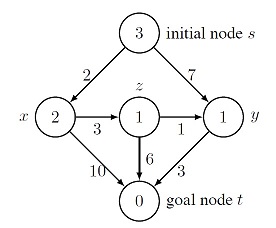 This space graph fulfilled the monotone condition of :

But during A* searching in a space graph, I have one a node (y) which is opened twice. Is the graph non - monotone then ?

Also in case of a graph has admissible heuristic function h but not monotone, is it possible if nodes is opened more than twice during a run of A* ?

Your graph is monotone. Notice that the algorithm does not state that a vertex does not come up twice in the algorithm, just that you do not need to reconsider vertices added to closedSet.

I get five steps, following the pseudocode described for monotone graphs.

This gives us our (optimal) path of $sxzyt$ having distance 9. We do not discover $y$ twice because our algorithm doesn't allow us to discover vertices twice.

Not the answer you're looking for? Browse other questions tagged graph-theory algorithms searching or ask your own question.

3
Is every forest with more than one node a bipartite graph?
0
Found all sets of nodes in a undirected graph that any pair of nodes in that set have a distance larger than N
0
Probability that a graph has more than one connected component?
4
Tree having no vertex of degree 2 has more leaves than internal nodes
0
A loop-free connected planar (simple) graph has at least one node of degree no more than 5 (True/False).
1
Smart enumeration of a subset of graphs obtained from a parent graph
3
Find shortest path in graph that visits 2 nodes from a certain node set
1
Directed Cycle Proof