A similar question can be found in this post. I apologize for any inconvenience.

I can't understand the geometric interpretation of Rouché's theorem in Wikipedia. The standard formulation of Rouche's Theorem is

It is possible to provide an informal explanation on why the Rouche’s theorem holds. First, we need to rephrase the theorem a little bit. Let $h(z) = f(z) + g(z)$. Notice that $f$, $g$ holomorphic implies $h$ holomorphic too. Then, with the conditions imposed above, Rouche’s theorem says that 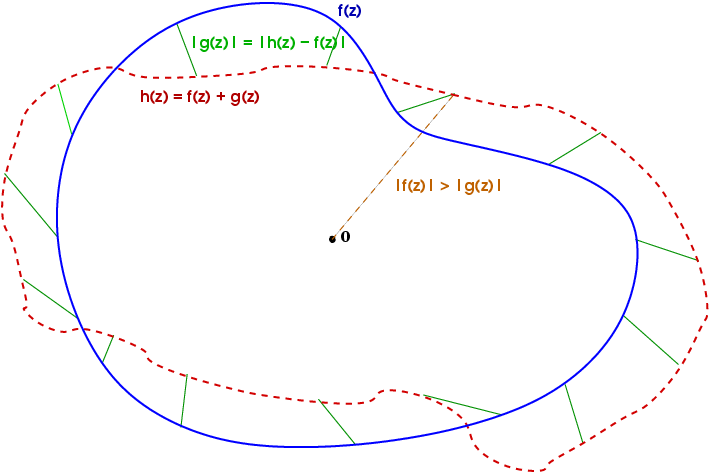 But the previous paragraph shows that since $f(z)$ winds exactly once around $0$, so must $h(z)$, and by the argument principle, the index of both curves around zero is the same, which means that $f(z)$ and $h(z)$ have the same number of zeros.

One popular, informal way to summarize this argument is as follows: If a person were to walk a dog on a leash around and around a tree, and the length of the leash is less than the radius of the tree, then the person and the dog go around the tree an equal number of times. (Indeed, one may see that the converse of Rouche’s theorem is false, insofar as the leash need only be less than the circumference of the tree.)

Browse other questions tagged holomorphic-functions rouches-theorem or ask your own question.

1
“Geometric” proof of Rouche's theorem on the number of zeros?

0
Clarification about Rouche's Theorem
2
Prove statement about the roots of a monic polynomial, possibly using Rouché?
1
Question about a proof (Rouches Theorem)
2
Rouché's Theorem/Argument Principle Application
0
$Re(\frac{f}{g})\geq 0$ on the boundary of disk implies $f$ and $g$ have same number of zeros in the disk
1
Show that $f$ has exactly two zeros (counting multiplicity)
1
Show that $f$ has exactly one zero on the square $Q =$ {$x + iy ∈ \Bbb C : |x| < 1, |y| < 1$}.