The only comprehensive way to determine whether a graph is Hamiltonian that I found is the Bondy-Chvatal theorem. According to this theorem let $d_i$ be the degree of vertex $v_i\in V$.

But the second question asks if any simple graph exists with such a sequence. But according to the Handshaking lemma: $$ \sum_{v\in V}\deg(v)=2\cdot |E|\implies |E|=16/2=8. $$ But isn't it that in any simple graph the number of vertices is always greater than the number of edges? If yes then our graph doesn't exist because it has $8$ edges but $7$ vertices.

I feel there's some catch in the question because if my answer to second part is correct than why would I be asked if such a Hamiltonian graph exists if the graph itself is not possible?

Consider a cycle on 7 vertices with one additional "chord-like" edge. You get a simple graph with the desired degree sequence. 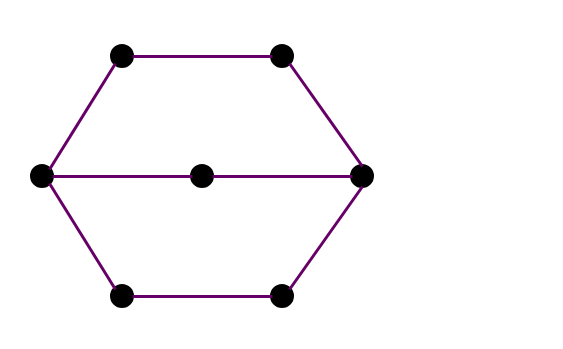 Not the answer you're looking for? Browse other questions tagged graph-theory hamiltonian-path or ask your own question.