I'm not looking for a proof of the taylor series, I want an intuition to why the quadratic term equals the orange part or if I was just wrong

My teacher explained the Taylor series saying if we create a function with all degree derivative matching the original function then our function approximate the original function. At the time it satisfied my confusion but now when I look back it feels kind of vague so I tried drawing a graph to see the details but I'm stuck trying to associate the quadratic approximation with the graph 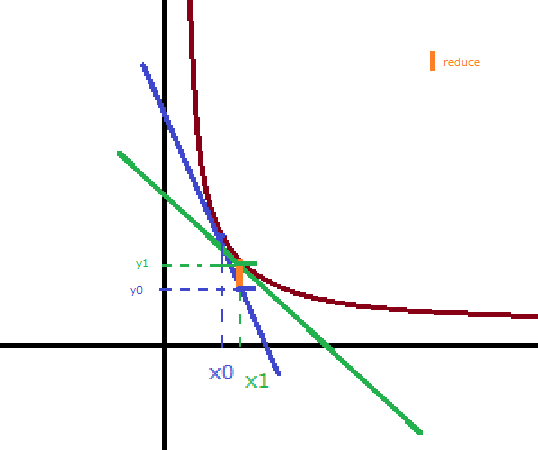 by adding the quadratic term we are incorporating the change in slope, which tells us that the blue line becomes the green line at $x = x_1$ therefore we need to adjust the $y$ value by the amount of change in the slope

if we incorporate the change in slope then

I think the hub of your confusion is this:

No. We are not incorporating the change in slope. We are still at the point $x_0$ (yes, we're adding on the derivative of slope function at that point, which is the instantaneous rate of change in slope, but not change in slope -- also, the function $f'$ is not necessarily linear, as you seem to be thinking).

In summary, the quadratic term in the Taylor series is meant to do just that -- to model the curvature and convexity of the function near the chosen point (you will agree, of course, that this is much better than just modelling the value or gradient of the function at that point).

if we incorporate the change in slope then

The logic here isn't entirely clear. You seem to be plugging the bulleted line into

but where does this expression come from? In fact, if you rearrange it, you get

But it's not clear a priori that averaging will give us the correct expression. What's really going on here is deeper than that. I'm not sure there's a good way to get intuition for the $\frac12$ factor through further elementary manipulations; the proof of Taylor's Theorem is probably the best path forward. But I think the averaging argument gives good intuition why there should be a $f''(x_0)(x-x_0)^2$ factor with some coefficient which shouldn't be $1$.

Not really an explanation, but a verification:

If you consider the expression

and the second one,

Not the answer you're looking for? Browse other questions tagged calculus taylor-expansion approximation intuition or ask your own question.