What is the probability that both children are boys if at least one is a boy born on a Tuesday?

A family has two children. Given that at least one of the children is a boy who was born on a Tuesday, what is the probability that both children are boys?

The day of birth is independent of the gender

Have a look and count the number of succesful outcomes compared to the total number: 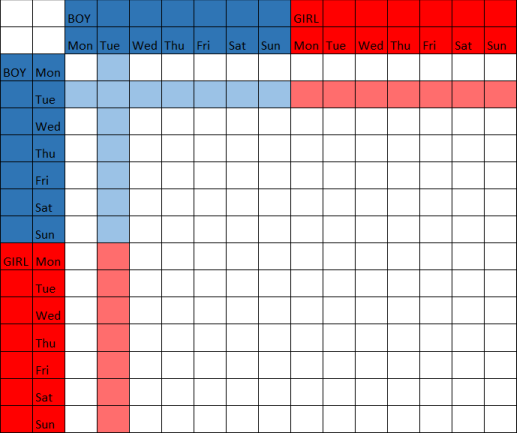 If you correct for biological factors, however, the answer may be skewed in either direction. Perhaps boys are a little more likely than girls, so I have heard.

If we only dealt with gender, not the day of week, your figure would have been correct since the table would then simply be:

The two things that confuse our intuitions are:

This is another twist on the classic Boy or Girl paradox (Wikipedia). This variant even has its own section on the Wikipedia page.

You do have to include the information about Tuesday. Let $A$ be the event both children are boys, and let $B$ be the event at least one was a Boy born on a Tuesday.

It depends on how the "given" information is determined:

The answer in case #1 is 13/27. There are 196 possible combinations of day+gender in a two-child family. 27 of those include Tuesday Boy, and 13 of those have two boys.

The answer in case #2 is 1/2, because Mr. Jones could have told you about, say, a girl who was born on a Thursday when he also had a boy who was born on a Tuesday. In fact, of the 27 combinations, 26 include a different form of the day+gender description. If you didn't ask about Tuesday Boys, you can only assume Mr. Jones would choose randomly between the two. So you have to dismiss 13 cases where he has a Tuesday Boy, including 6 where he has two. The answer is (13-6)/(27-13)=7/14=1/2.

The original question is incomplete, since it does not state the experiment conducted in arriving at the facts in the problem description.

In probability theory, probability spaces are used to model experiments in the real world. However, in this case, we discern no such model or experiment; hence the question is incomplete.

We could just as well have stated the question as:

"A family has two children of which one is a boy born on a Tuesday; what is the probability both children are boys?"

4
Modified two child problem. Find the probability that both are girls, given that at least one is a girl born in March.
1
Probability Of Two Boys Puzzle (Standard vs Tuesday Boy)