A geometric proof (without algebra or trigonometry), and ideally presented visually (a proof without words). EDITED

(I'm especially curious if it's possible without without using triangle congruency.)

Is there a simpler proof?

I was hoping for one using only parallels, and alternate interior and corresponding angles, but these couldn't use the equal lengths of the legs (could they?)

Consider the triangles ΔABC, ΔACB. These are congruent via SSS criterion and hence ∠ABC = ∠ACB.

e.g. angles congruency can be shown without triangle congruence, e.g. vertical angles, corresponding angles. Are there ways that lengths can play a role, apart from via triangle comgriency?

Let $AB$ and $AC$ be the equal sides of $\triangle ABC$, construct AD is perpendicular to BC. 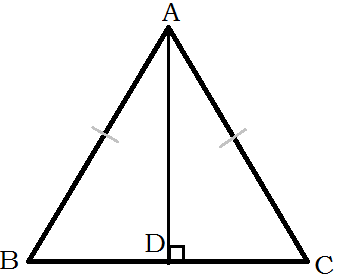 $\angle ADB= \angle ADC$, since both are right angles.

therefore base angles are equal.

Not the answer you're looking for? Browse other questions tagged geometry triangles alternative-proof visualization or ask your own question.

6
Need for triangle congruency axioms
1
Prove triangle made from two altitudes and midpoint is isosceles
5
Alternative proof that base angles of an isosceles triangle are equal
4
Are all triangles isosceles?
0
congruent triangle question
1
How to find the base of an isosceles triangle with the angles and legs
0
Proof of the ASA triangle congruence criterium
0
Triangles and Congruency
3
If we know the congruence of the apex and the base of two isosceles, are both congruent triangles? (help with the proof)
0
Can we consider 3 triangles in case of congruency