Trapezoid area proof by dividing it into two triangles?

I have drawn this diagram in GeoGebra. It may not be drawn to scale (it is not congruent) with the diagram in my textbook, but it is actually similar. I actually scanned the diagram from my textbook and then made this diagram on top of it. In the textbook, they did not mark the vertices. But I have named the vertices (blue) to simplify explanation, so that we have something to refer to.

The formula above is the one that's given in the textbook.

From just the looks of it, does this even make any sense to you? They drew this diagram and named the sides of it as a, b, c and d. They also drew the altitude h and the diagonal DB.

So what I am asking for is for someone to give me a proof that the formula for the area of a trapezoid can be deduced by dividing the trapezoid into two triangles, as indicated by this diagram.

(Image upload to Imgur doesn't work at the moment. I'll get back to it.)

I have constracted the altitude DF. The area for triangle DBE is half of the area of DFBE.

I have constructed the altitude AH. The area for triangle BHA is half of the area of BEHA.

But this gives me the overlapping triangle GBH. It overlaps with triangle DBE. Is the area of GBH equal to the area of AGD?

And what about the triangles EBC and DFA?

I think I got it right now. So here's that second diagram again.

And here is the third diagram once again. 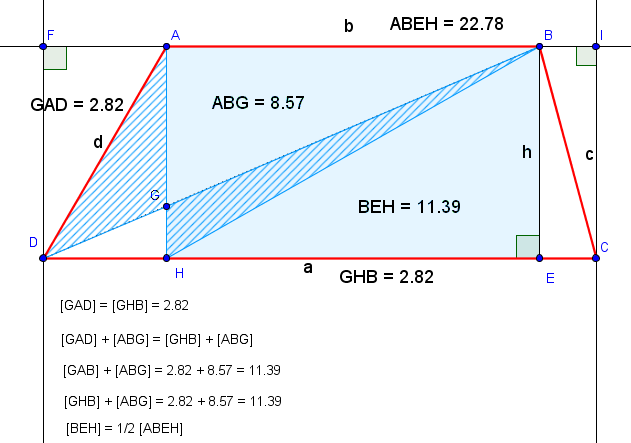 They are not the same size this time. I think I got the scale wrong on export to PNG image. But here you can see that I have shaded and measured the areas of the rectangles and triangles to show how it interacts with the area of the trapezoid.

I know that this is not really a formal proof of the area of a trapezoid. But I think this makes sense to me now. I was getting confused by the fact that the triangle ABD had no height or altitude. Or it was not within the triangle itself, it was outside of the triangle. And also I had hard time seeing how that overlapping part GHB "transforms" (or however you want to call it) into that other empty space. But I now see it more clearly.

Find the midpoint of segments AD, AC, and BC, Label these points E, F, and G respectively.
Next, draw in the 'midsegments' of the two triangles.

WHAT!!! BTW, when I took the Praxis exam years ago, we had to prove the trapezoid area formula in two different ways. I used the rotated trapezoid to make a parallelogram as the other way.